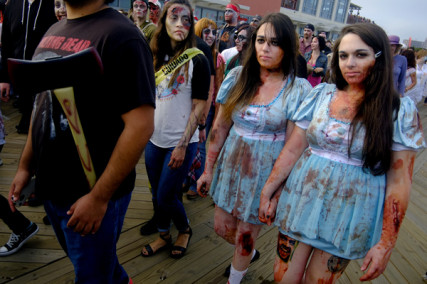 WEST LONG BRANCH, N.J., (RNS) Monmouth University is the latest school to offer a course on the growing zombie phenomenon. “Zombies: Social Anxiety & Pop Culture” was among the first courses to fill up when students at the private university in West Long Branch registered for fall classes.

Getting into the minds of mindless zombies is plenty of fun, according to students in the three-credit course. Those lucky enough to land a spot in the 25-seat class have picked apart AMC’s zombie-themed television show “The Walking Dead” and donned their own zombie costumes on a field trip to Asbury Park’s recent “Zombie Walk.”

As the semester winds down, students are preparing a real-life evacuation plan for campus buildings in case the zombie apocalypse finds its way to the Jersey Shore.

“Most students are coming in thinking we are just going to be watching zombie movies or TV shows. We do very little of that,” González-Tennant said.

Much of the class focuses on the historical roots of the zombie phenomenon.

“It’s a mix of science and religion,” González-Tennant said. “There is a lot of folklore and oral tradition of zombies in Haiti and the Caribbean.”

Monmouth is among several colleges jumping on the zombie scholarship bandwagon. The University of Baltimore and Columbia College in Chicago both offer zombie studies classes. Michigan State University offered a two-credit course last summer on surviving the zombie apocalypse in which students were placed in survivor groups in a simulated zombie attack.

Zombies start their walk from the beach during the 2013 Zombie walk in Asbury Park, N.J. on Saturday (Oct. 5). Photo by Aristide Economopoulos/The Star-Ledger

Last month, the University of California at Irvine launched a noncredit online course, open for free to anyone, called “Society, Science, Survival: Lessons from AMC’s ‘The Walking Dead.’” In an unusual arrangement, the creators and cast of the zombie show are collaborating with the four professors leading the eight-week course to help weave the themes of the program’s fourth season into the classes.

“There will be something for everyone in this course, which will explore concepts as varied as post-disaster nutrition, the foundations of human survival and stereotypes in a Darwinian environment,” Zuzana Bic, a tenured lecturer in public health, said while announcing the launch of the UC Irvine class.

At Monmouth University, freshman Jodi DiSilvestro said her family didn’t believe her when she said she was getting college credit for learning about zombies. But the class, which is among a series of usual classes designed for freshmen, turned out to be more academic than she anticipated.

“It’s all anthropology, which I wasn’t expecting,” said DiSilvestro, 18, a business administration major. “I’m learning a lot about different cultures.”

Even watching “The Walking Dead,” one of DiSilvestro’s favorite television shows, has changed, she said.

Some scholars trace the origin of zombie folklore to Haiti, where voodoo practitioners may have given powerful drugs to victims to put them in a zombie-like state. Similar stories from Africa tell of the dead being brought back to life under a sorcerer’s control.

Most researchers agree the modern zombie craze started in 1968 with filmmaker George Romero’s movie “Night of the Living Dead.” It continued with video games (“Resident Evil”), comic books (“The Walking Dead”), popular movies (“28 Days Later,” “Shaun of the Dead” and more) and comic novels (“Pride and Prejudice and Zombies”).

González-Tennant, the professor teaching the zombie course at Monmouth University, said he uses zombie folklore in several of his classes. In a software mapping class, students have done computer mapping of a potential zombie apocalypse.

In other courses, including his current zombies in pop culture class, González-Tennant asks students to make their own zombie movies or graphic novels. He has been surprised by the creative results, including one project in which a student used a zombie tale to explore his friend’s heroin addiction.

“Zombies are a metaphor to explore other things,” González-Tennant said.

(Kelly Heyboer writes for The Star-Ledger)