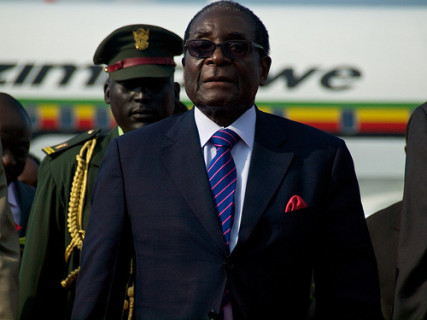 President Robert Mugabe of Zimbabwe on July 8, 2011. Photo by Gregg Carlstrom, via Flickr.

“When things fall apart, the children of the land scurry and scatter like birds escaping a burning sky,” NoViolet Bulawayo writes in her novel We Need New Names. “They flee their own wretched land so their hunger may be pacified in foreign lands, their tears wiped away in strange lands, the wounds of their despair bandaged in faraway lands, their blistered prayers muttered in the darkness of queer lands.” Bulawayo tells her story through Darling, a 10-year-old girl caught in the misfortunes of Zimbabwe. Darling listens as grown folks talk about politics. She and her friends steal guavas to fight the growl of an empty stomach. She reflects on the day the police bulldozed her house, being forced to live in a tin shack, and the day her father returns home from South African after a long time away.

Bulawayo writes about women doing their best to look pretty, and men leaving home to find work. Escaping to America or another place better this “terrible place of hunger and things falling apart,” is the dream of both young and old. Darling ends up in America. I made my first visit to Zimbabwe the spring of 2003. I was there with a group of journalist to report on President Robert Mugabe’s decision to take land from white farmers, the AIDs pandemic, and opposition to Mugabe’s presidency. My trip to Zimbabwe, more than any I have taken before or since, altered my view of global citizenship. A theology viewed from the lens of American privilege was forced to consider the plight of those hindered beyond anything I have ever witnessed. My common prayers seem empty in comparison to what they endure. My tears began in the middle of a wheat field. As a white farmer shared his opposition to the policy that would take his farm away; I noticed a black man holding a stick in one hand, and a large sack in the other.  I stepped away to observe the man. “What’s in the bag,” I asked after noting that it seemed he didn’t know I was watching, or that he didn’t care. He pulled a large rat from the bag. “This is my dinner,” he replied just before I dropped my recorder. “I don’t make enough money to feed my family. This is what we eat.” It became harder to report on Zimbabwe. The sight of dying AIDs infected children in a hospital with no medication to treat them, the squeal of mothers upon hearing of the death of their children, mobs of women on streets begging us to purchase their crafts so they could eat – the pain never ceased.

The most agonizing part was the trip to an orphanage. More than a hundred children ran to greet us as if we came to rescue them from the horror. An infant wobbled toward me with arms reaching up, begging me hold her. Her small arms did their best to glue to my neck like a plea to never go away. Her small head rested on my chest like she had discovered home. I felt a love for her grow from that place that parents feel for their children. I wanted to take her home. We interviewed President Mugabe the next day. I had two pages of questions to ask the man who led the revolution against white minority rule. I had questions regarding the Gukurahundi campaign, and Mugabe forces killing thousands of members of ZAPU, the opposition party. I had questions involving land reform, economic sanctions imposed by the United States and the European Union, and the decline of the Zimbabwean dollar. “What is your government doing to address the AIDS pandemic and worsening economy,” I asked. Mugabe blamed it all on a racist international front aimed at destroying his reputation and the economy of his country. He blamed it on the opposition party who used the American and European press to promote a racist agenda. What about the father hunting for rats to feed his family? What about the little girl searching for someone to take her home? I often wonder about the little girl clinging to my neck. She could have been like Darling in Bulawayo’s novel.  Darling comes to America, gets good grades, and develops an American accent. She ends up in America to participate in the American Dream. The little girl cried when I drove away. My heart was broken because she had to stay. I knew it wouldn’t be enough to bring just one child home. The masses of others reminded me there’s so much work to do. Everything shifted that day. There’s always more to the story than government policy and economic theory.  There’s more than immigration laws, and pain grounded in a shameful past. Isn’t this the kingdom of God? Please Lord, bless the children of the world – one child at a time.

Carl W. Kenney II was named North Carolina’s top serious columnist by the North Carolina Press Association for his work with the News & Observer in 2011. He is the creator of the popular blog Rev-elution.