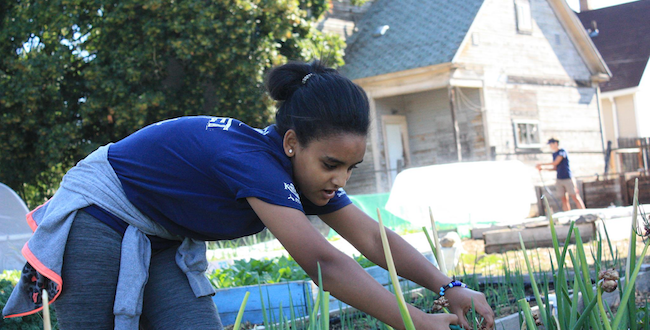 For many children, the word ‘summer’ evokes images of vacationing, swimming, camping, hanging out with friends and an appreciated absence of school and homework. However, for others, summer can mean extreme heat, a scarcity of food and no escape from home-life.

With almost 74,000 people below the poverty line, Spokane County has a great deal of children and teenagers that struggle to make it through summer. For many children whose families are impoverished, school can be a safe haven that provides them with safety, education and consistent meals. However, every summer, impoverished children must face three months without support from their schools.

That’s where the West Central Episcopal Mission (WCEM) and other programs have stepped in. The WCEM provides hot breakfasts and food to children and teens participating in Project Hope and Stone Soup Café.

These two programs are provided with food from the Cathedral of Saint John the Evangelist and St. Andrew’s Episcopal Church.

Project Hope is a summer program that gives teens two meals along with an opportunity to gain some work experience. Groups of teenagers and their leaders help farm a handful of gardening plots around West Spokane and sell their crops at local farmers markets.

“For the summer program we have just under 50 [kids participating],” Jenifer Priest, Project Hope development director said. “We have a spring and fall season too. We have less work and so those have about 15 youth each.”

Project Hope began as an initiative to give children not only an opportunity to work during the summer, but as an alternative to getting involved with gangs as well.

One of Project Hope’s farmers is 12-year-old Mieri Kahsay. Having participated in Project Hope for two years, Kahsay’s favorite tasks are planting the crops and selling them at the markets.

After finishing high school, Kahsay hopes to attend either Gonzaga University or Whitworth University, and get a degree to become a pharmacist.

In addition to these two programs, Dodds has worked to bring in a new program to help children stay fed over the weekends.

“One of the programs that I have coordinating or working with here in town is a program called A Bite 2 Go,” Dodds said. “Which is a program that helps to feed kids that don’t have meals during the school year. They obviously get fed at school, but sometimes when they get home on the weekend, there’s no food there. …So the idea was, why don’t we use that program in conjunction with Project Hope and Stone Soup Café to make sure they have something to eat on the weekends.”

“It definitely makes a difference,” Priest said. “This neighborhood has a poverty rate of about 40 percent. For the younger kids in the elementary school, 90 percent of those kids qualified for free or reduced lunch. That’s a really high number. …Having enough food for the whole family, having it throughout the whole month is a challenge to these families. These kids, if they didn’t have this program there would be times where they would definitely go hungry.”