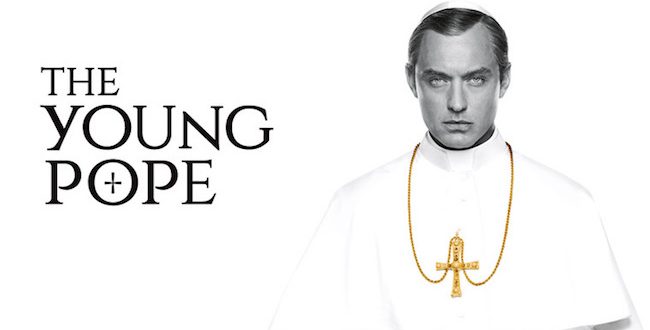 I must admit, when I heard Jude Law would be starring as a 40-something pontiff in a new series on HBO, I was definitely excited. Despite knowing HBO’s reputation precedes itself (not in a good way), and understanding that secular portrayals of a nuanced faith almost always fall flat (to say the least), the popes are of particular interest to me after I spent last year writing about every single one of them.

“The Young Pope” is a new series chronicling the first days of Pope Pius XIII, an American and former Archbishop of New York who was shockingly elected at the young age of 48. It’s rumored that Pius may not believe in God, people think his surrogate mother, Sister Mary (played by Diane Keaton), is the “real pope” with her influence of him, and the new pope prefers an aloof, distant, and cold attitude toward even those closest to him.

And so, after watching the first several episodes of HBO’s “The Young Pope,” here’s four quick thoughts on this controversial new series:

It has stunning visuals.

There’s nothing worse than a TV show or movie getting the aesthetics wrong — and with Catholic garb it’s a frequent occurrence — because something as simple as a pectoral cross being worn wrong by a portrayed bishop can all but ruin the legitimacy of a story. Thankfully, The Young Pope is not among them. Without doubt, the outfits, set design, and all the other trappings of Vatican life are marvelously done. Bravo, HBO.

Human brokenness is on full display.

One of the best authors of the past century has to be Graham Greene, an American Catholic who wrote in the early-to-mid 20th Century. Greene’s best and most popular novel is “The Power and the Glory,” featuring an alcoholic priest in Mexico during the Cristero War, wandering through the region as the last legitimate priest who has yet to be either killed or persuaded to give up his faith. What makes Greene’s story so powerful is that there’s no clear black and white (other than, perhaps, his faithfulness to his priesthood), and the reader is forced to wrestle with the messiness of humanity. A man who might otherwise be considered a degenerate cleric is seen authentically wrestling with his demons, fighting to overcome his own sin, and serve well the God to whom he’s devoted his life.

Granted, “The Young Pope” is hardly “The Power and the Glory.” But what’s intrigued me the most about the former is the same thing I loved in the latter: The people are broken, and their lives are messy, and the Lord works through that. In the case of Pius XIII, he just happens to be pope while he’s battling the fact that his parents abandoned him as a child. Is he taking it out on the entire Church? Is his rigidity and unwillingness to be seen by the faithful actually appropriate, or is it simply a selfish, childish move? Such things are actually confronted, which makes me want to keep watching.

American exceptionalism is alive and well.

It’s an all-too-common thought in American culture that our nation is the “greatest in the world.” Though it may well be true that America is great, even a cursory study and understanding of the Church’s history makes apparent that, in actuality, the USA is really nothing special in the grand scheme. Heck, the Church herself has been around almost 10 times longer than the United States, and she’s seen an even greater number of nations come into and fade out of existence in that time.

So, forgive my incredulity at the thought of an American being elected pope simply as a matter of course. And I’m hardly the only one who thinks so. I recall Cardinal Timothy Dolan, the Archbishop of New York, saying to Jimmy Fallon prior to the 2013 conclave, “Jimmy, I have a better chance of replacing A-Rod at third base for the Yankees than I do replacing Benedict XVI.”

Many might be surprised that a heresy known as “Americanism” was condemned by Pope Leo XIII in 1899, one in which adherents falsely thought that the doctrines of Catholicism were up for personal interpretation, as if one’s conscience trumps divine revelation. Such a belief, perhaps unsurprisingly, is on display in “The Young Pope.” And I roll my eyes, because in reality there’s so much more to Catholicism than that.

Its portrayal of Catholicism is rather ridiculous.

Frankly (and some might think my “Catholic” is showing a little too much here), my overall opinion of “The Young Pope” is that it’s little more than a lame attempt by the devil to discredit the Church, as though the Prince of Darkness is fresh out of ideas. For explanation, I could simply point to the opening credits, which culminate in a statue of St. John Paul II, inarguably the greatest and most influential man of the 20th Century (and easily a Top-Five pontiff in my book), being unceremoniously knocked over as the prideful Pius XIII walks casually by.

“The Young Pope” juxtaposes fanciful dress and an intolerant, rash human arrogance in its portrayal of Pius XIII, as though the two go hand in hand. It’s as though the show is saying pageantry and bigotry go hand in hand, and that’s an idea that I balk at. Though surely there have been popes who loved both themselves and their fancy garb a little too much, it’s hardly been the norm through the centuries. Case in point, one of the humblest popes of the last 150 years, Pope St. Pius X, was both a huge fan of the Church’s festivity and a man who said, “I was born poor, I have lived poor, and I wish to die poor.”

BONUS: There have been worse popes.

As much as I may be torn over what to think of “The Young Pope” one thing is for sure: Pope Pius XIII is far from the worst pope in the Church’s history. Though none have ever formally taught error, and despite the fact that there are surprisingly few bad eggs out of our 264 popes, we’ll readily admit that there was one who sold the papacy, one who was rather taken by sins of the flesh, and one who loved extravagance so much that he owned a pet elephant.

And so, one need not be too concerned about a spectacle like “The Young Pope” at least as far as the potential for scandal is concerned. The Holy Spirit still guides the Barque of Peter, and in the words of St. Leo the Great, “The dignity of Peter suffers no diminution even in an unworthy successor.”

Previous New Community Church seeks new home in downtown Spokane
Next Upcoming Lecture: “Why We Need to Know About the Catholic Intellectual Tradition”