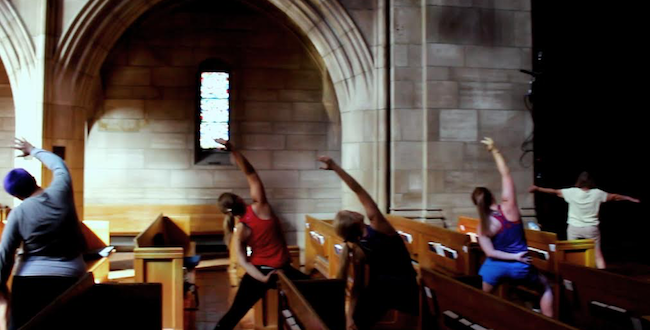 Participants at Yoga at the Cathedral/Megan Carroll

Spokane community ‘gloms onto’ Yoga at the Cathedral

In 2014, she received an assistant professorship in Gonzaga University’s communication studies department and moved into an apartment with her cat across the street from St. John’s Cathedral. After filling out a guest card at a service, The Rev. Martin Elfert, a former minister at the cathedral, asked her to chat over coffee about ways she could contribute to church ministry. Yoga at the Cathedral was born shortly after.

Silvestri also teaches yoga at various studios throughout the city. Yoga at the Cathedral’s Facebook page has a following of over 200 Spokane community members, and Silvestri says many of the participants work in service-oriented or creative fields.

“I think they need a docking station for their inner light…Lights shine out and without a mirror, or another light shining back, they’ll just get exhausted,” she said.

The Rev. Nic Mather, curate at St. John’s Cathedral and priest for about two years, said the Spokane community was in need of the Yoga at the Cathedral ministry because he had heard that many area holy yoga practices had dried up.

The Episcopal Church believes that all of its members are ministers through their baptisms. Therefore, Silvestri’s leadership of the yoga ministry shows an understanding of her calling as a Christian, Mather explained.

Silvestri was a self-described “Christian mutt” throughout her childhood. Her father was ex-communicated from the Catholic church when he married her Episcopalian mother in 1970.

“I am the only one in my family who was baptized Lutheran, so I’m kind of familiar with the whole gamut of Christian thought, which I think is a blessing,” Silvestri said. 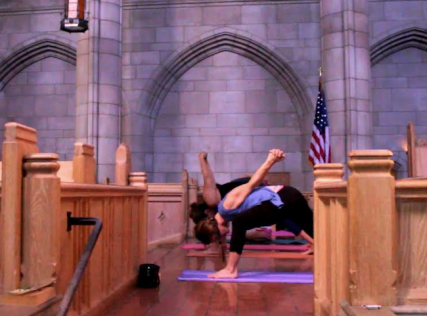 Throughout her 20s, Silvestri struggled with her spirituality and preferred experiencing God in the outdoors rather than a church. It was during this period of her life — one where she said she felt “particularly forsaken” — that she began practicing yoga.

“I didn’t feel comfortable going to church so I went to a yoga studio for that same type of quiet, intrapersonal communication and introspection.”

After yoga positively impacted her life, she wanted to give the experience to others and began teaching a few years later.

Yoga feels familiar to Christian practitioners who engage in longstanding traditions of contemplative prayer and meditation, Mather said. He believes yoga provides people a way to connect with God through “being in tune with all aspects of our being.”

“We can’t communicate with God, and we can’t pray and hold that space if we are not connected through our minds and our hearts and our bodies,” he added.

Mather acknowledged that some Christians believe that yoga “opens the door to the devil,” which he attributes to a fear of “the other” from the Eastern world. On the contrary, he knows many Christians who practice Buddhism as a complementary religion.

“…Practicing yoga in and of itself honors the tradition that it comes from, but, as Christians, we are not forbidden from seeking God in different ways. I think that however we can find a way to connect to the holy is a holy practice,” he said.

Silvestri pointed to the popular Bible verse Matthew 5:9 when describing the similarities between Buddhist yoga and Christianity: Blessed are the peacemakers, for they will be called the children of God. The deliberate discomfort of yoga and in some Christian practices of kneeling in church services also align, since they both remind people that there is “work to be done” and “places we can soften,” she said.

Silvestri is trained in power yoga, which is a movement-based practice as opposed to more static practices focused on balancing. Epiphanies and moments of enlightenment in Christian Scripture often occur on mountaintops, and Silvestri thinks this is explained in part by a new openness and ability to “get over yourself” that comes with the exhaustion of a long journey. This also explains the constant movement in the yoga she practices, she said.

“I think that practicing yoga is a way to get over yourself — and I mean that in the most loving way — and hook into something bigger,” she said. “…Yoga is not about flexible ligaments, it’s about flexible temperaments.”

Digital time is like “trying to take a sip from the firehouse,” Silvestri added. She believes Yoga at the Cathedral resonates with people because it lifts them out of digital time — there are no cell phones or music — and into a quiet space where God or nature’s time and human time are acquainted with one another.

“When you take a God perspective, all of the deadlines seem so petty,” she said.

Previous Ask A Jew: What does God look like?
Next The need to ‘get real’ with curriculum