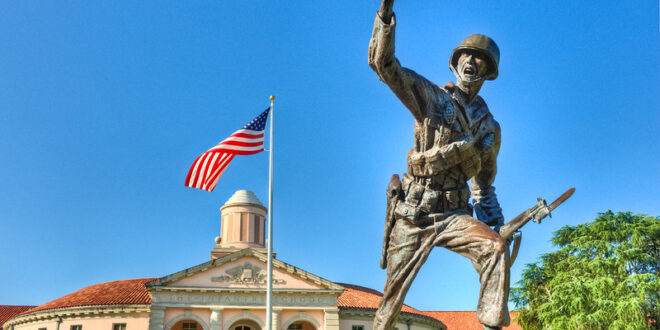 "Follow Me" is a United States Army memorial located at Fort Benning, Georgia, an Army Post named after a Confederate general. Flickr photo by Photo by John D. Helms

I was out for my masked morning walk yesterday, when I ran into a fellow Jew. We started talking about the social upheavals in this country.

To which I answered: “For Jews, nothing is ever ‘just history.'”

Let me tell you what I mean by that.

Last summer, my son and I traveled from Jerusalem to Berlin.

I learned a new word recently — a German word that I can barely pronounce.

Vergangenheitsaufarbeitung. According to the author Susan Neiman in her book on the function of memory in Germany and the American South, it means “working off the past.”

That is the common task of Germany and the South — working off the past.

You can imagine those claims.

“They were simply good soldiers.”

“They were defending their land.”

“They were fighting for their heritage.”

Imagine if my son and I had visited Berlin, and seen — not memorials to the dead, but tangible celebrations of their murderers.

Imagine seeing a swastika — in a Catholic cathedral in Minnesota.

In his extraordinary new book, What Am I Missing? Questions About Being Human, Rabbi Joseph Edelheit describes a cathedral. Its model had been a third century cathedral in Ravenna, Italy. It contained the ancient symbol of the hakenkreuze — the broken cross, aka the swastika. Once upon a time, in the shadows of history, it was an inoffensive symbol. No longer.

Rabbi Edelheit helped the church raise the necessary money to remove that offensive symbol. If you would be offended seeing a swastika on public display, then you understand how American blacks react to the names of 10 military installations that bear the names of Confederate generals — names like Benning and Bragg.

It would have been so easy for this administration to agree to change the names of the many military leaders, like General Petraeus, agree with that change. After all, the Confederate generals who led troops in the Civil War were traitors to the United States.

If only this administration had the courage of, oh — NASCAR. NASCAR has banned Confederate flags. NASCAR knows that those flags are not simply history. They constitute an ugly memory, born aloft for one reason only — to rub the collective noses of black Americans in an unsavory past. What would I like to see?

And yes, something else.

Let’s take a cue from the stolpersteine.

In every place in the South where there was a lynching — a plaque.

Jews should get this — perhaps more than anyone else. In the words of Susan Neiman:

When W.E.B. Du Bois visited the Warsaw ghetto in 1949, he was shaken by the parallels he drew with what he’d called the century’s greatest problem, the color line. After the 1963 Birmingham church bombing, James Baldwin said that white Americans share collective guilt for the persecution of black Americans as Germans did for their silence during the Nazi persecution of Jews.

We have reached the proverbial tipping point. The American Berlin Wall — the wall of a culture of racism in this country) has begun to fall. The statues of Lenin fell; so, too, the statues of Confederate generals must fall.

And, you wondered about the meaning of that old “Negro” spiritual — “Joshua fought the battle of Jericho, and the walls came a-tumbling down.”

The walls of the American Jericho are a-tumbling down.

Back to Berlin. At the Rosenstrasse site, the Block of Women Memorial, there is a sculpture of a man sitting on a bench.

He is passive, blase about what he is seeing before his eyes.

Do we American Jews want to be the man on that bench?

Remember the success of Rosenstrasse.

Imagine: Rosenstrasse could have become the beginning of a Jewish Lives Matter movement.

Perhaps, our history would have been just a little bit different.

Previous Ask A Buddhist: Karma and Predestination
Next Faith leaders around the country prepare for historic Juneteenth celebrations