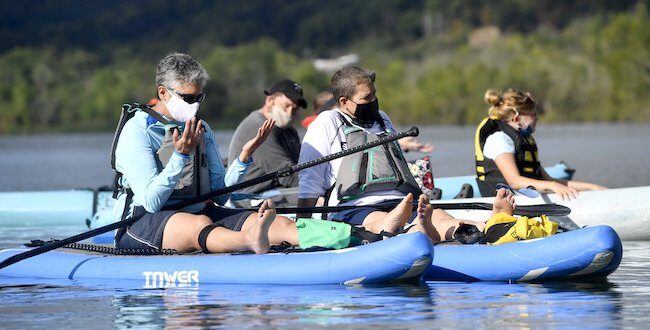 Annette Hestres holds her hands up in prayer during the kayak church service at Bald Eagle State Park, Pa., on Sunday, Aug. 30, 2020. State College Faith United Church of Christ hosted the floating service which allowed for the members to socially distance. RNS photo by Abby Drey

Year In Review: The Best Religion Journalism Of 2020

Year In Review: The Best Religion Journalism Of 2020

(ANALYSIS) What a year for religion news!

From the pandemic to the election, the major headlines of 2020 had huge faith angles.

For this special year-end edition of Weekend Plug-in, I asked some of the nation’s top reporters and columnists to share the favorite religion story they wrote during 2020.

However, some of them couldn’t stop at just one. I guess I’m OK with that because it means more terrific links in the list below.

It’s a holiday week, so I didn’t catch up with everybody. But I sure appreciate my colleagues who responded. And I beg forgiveness for the excellent Godbeat work I missed in this roundup, this week and every week.

Power Up: The Year’s Best Reads

Journalists who write about religion pick their top story — or in some cases, top stories — of 2020.

• Michelle Boorstein, Washington Post: These Mormon twins worked together on an IRS whistleblower complaint over the church’s billions — and it tore them apart, published Jan. 16.

• Emma Green, The Atlantic: The Temptation of Kayleigh McEnany: How an ardent defender of faith — and Donald Trump — came to think of the press as her enemy, published June 25.

• Jaweed Kaleem, Los Angeles Times: As the coronavirus spreads in Florida, a priest struggles to reach his flock, published March 3; In a city scarred by the coronavirus, a priest revives a nervous parish, published Aug. 7; and The pastor thought Trump was ‘evil.’ So he quit his conservative church, published Oct. 29.

• Ian Lovett, Wall Street Journal: ‘It’s like I got kicked out of my family.’ Churches struggle with mental health in the ranks, published Jan. 20; and The Mormon church amassed $100 billion. It was the best-kept secret in the investment world, published Feb. 8.

• Menachem Wecker, Washington Post Magazine: The Museum of the Bible is winning over some of its biggest critics: Jewish scholars, published June 1.

Besides the favorites above, these are some of the religion stories that stood out to me.

• The Bible that oozed oil:A small Georgia town, a prophecy about Donald Trump and the story of how a miracle fell apart. (Ruth Graham, Slate)

• The road to Bloody Sunday began 30 miles away:What happened in Marion, Alabama, would send hundreds of people to the Edmund Pettus Bridge, where civil rights history was made. (Gary Fields, Associated Press)

• In Ohio, the Amish take on the coronavirus:A famously traditional community mobilizes to help hospitals with medical supplies, even as it struggles with reconciling its communal way of life with the dictates of social distancing. (Elizabeth Williamson, New York Times)

• Closed houses of worship served during 1918 flu pandemic: A faded, single-spaced letter from that fall a century ago has a jolting immediacy to readers today. (Peter Smith, Pittsburgh Post-Gazette)

• A cough. An X-ray. A ventilator:Bishop Steve Wood battles coronavirus and lives to tell. (Jennifer Berry Hawes, The Post and Courier of Charleston, S.C.)

• Nuns vs. the coronavirus:At a Catholic nursing home in Delaware, one-fifth of residents have died. The nuns who run the facility are grappling with their calling. (Emma Green, The Atlantic)

•A pastor’s life depends on a coronavirus vaccine: Now he faces skeptics in his church. (Sarah Pulliam Bailey, Washington Post)

• The religious roots of Trump’s magical thinking on coronavirus:Long ago, his biographers say, the president learned how to craft his own version of reality, a lesson he learned in an unlikely place: a church. (Daniel Burke, CNN)

•The deacon’s death from COVID-19 was heartbreaking:Losing his body was a nightmare. (Michael M. Phillips, Wall Street Journal)

• After Hurricane Dorian, a layup helped the Bahamas rebuild:The basketball shot won a game — and rebuilt a home, rebuilt a school and rebuilt a church, all of it directly impacting the lives of hundreds of Bahamians. (Tim Reynolds, Associated Press)

• ‘It hit us like a ton of bricks’: Undocumented immigrants and churches that give them sanctuary face breaking points. (Jeff Gammage, Philadelphia Inquirer)

• Joe Biden’s Catholic politics are complicated, but deeply American:Biden simultaneously keeps his faith at a distance and as close as possible. (Jack Jenkins, Religion News Service)

• Southern Baptists confront stain of racism, slaveholding past: But for some it’s not enough. (Holly Meyer, The Tennessean)

• A prophet in his own city: Jacob Kornbluh, the Hasidic reporter standing up for social-distancing. (Avital Chizhik-Goldschmidt, The Forward)

• The most American religion:An insider’s perspective at the bicentennial of the Church of Jesus Christ of Latter-day Saints. (McKay Coppins, The Atlantic)

• Bob Gibson was blessed by the friendship of a preacher and fantasy camp catcher: The Hall of Fame pitcher’s death drew attention to the unlikely connection. (Benjamin Hochman, St. Louis Post-Dispatch)

Inside The Godbeat: Behind The Bylines

In the favorites above, both the Washington Post’s Michelle Boorstein and the Wall Street Journal’s Ian Lovett highlighted stories related to the $100 billion investment fund amassed by the Church of Jesus Christ of Latter-day Saints.

Religion Unplugged’s own Paul Glader played a crucial role in breaking that story late last year. His coverage earned awards from the Religion News Association and the Society for Advancing Business Editing and Writing and was a finalist for an Editor & Publisher EPPY Award for best business reporting.

For the latest, check out Glader’s piece published last week on “A slightly more transparent LDS Church one year after news of a $100 billion fund.”

Charging Station: In Case You Missed It

Here is where you can catch up on recent news and opinions from Religion Unplugged.

• International court says it can’t investigate crimes against Uyghurs in China (by Ewelina U. Ochab)

• Islamic militias are protecting churches in Indonesia (by Paul Marshall)

• The Christchurch report shows the new face of terror (by Dr. Robert Carle)

• Is this the way? ‘The Mandalorian’ questions religious tradition (by Jillian Cheney)

• How will Catholic issues shape news coverage under President Biden? (by Clemente Lisi)

Speaking of journalists who can’t stop at just one favorite story, here’s a shameless plug for a few of my own.

At the 25th anniversary of the Oklahoma City bombing, I caught up with a victim’s mother whom I first interviewed for The Oklahoman in 1995. And I wrote a retrospective piece for The Associated Press on how a prayer service four days after the bombing brought hope to a shaken America.

Next week, we’ll focus on Religion Unplugged’s most popular — and most unsung — stories of 2020.

For now, I’ll end with this: Merry Christmas!

Bobby Ross Jr. is a columnist for Religion Unplugged and editor-in-chief of The Christian Chronicle. A former religion writer for The Associated Press and The Oklahoman, Ross has reported from all 50 states and 15 nations. He has covered religion since 1999.

Previous Ask A Buddhist: Practical Ways to Live Faith In Daily Life
Next One Good Thing: Highlights of 9 months in tales of kindness