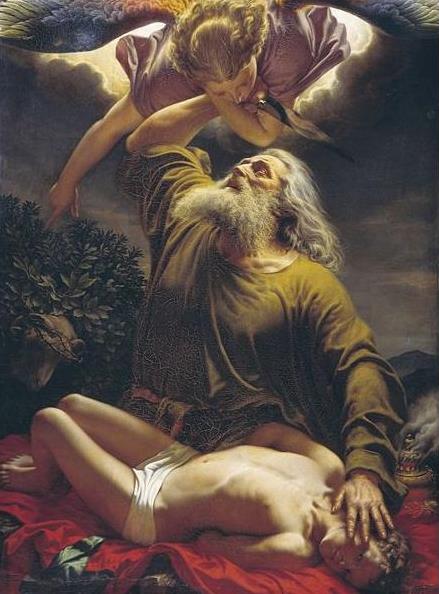 Wrestling on the Menacing Crag of Mt. Moriah

There’s a mountain that looms on the distant horizon, its crags and peeks are dark and devastating. Tumultuous and sinister are the clouds that loom over its frightful heights. It’s narrow and bloodied trail ascends, littered with stumbling stones, briars and striking serpents of laws, commands and judgments. The ravines that crumble into the abyss below, have swallowed many hard-driven victims whose voices echo warnings against the hallucinations that haunt this suffocating air.

At the crest of this monolith of meaning, is an altar built with tears, tensions and terrors. The mud that holds as mortar, has been mixed with the conviction of a thousand self-fulfilling prophecies. There are no more bushes that burn with celestial fire on this earthen sanctuary. Here everything that grows is meant to be hewn down, nothing is green, it’s all blackened with the fires of consuming and atoning zeal.
This is the coliseum of conviction, where fathers slaughter sons and mothers plunge knives into the hearts of their daughters. Its hallowed ground, soaked with blood offerings demanded by thirsty deities and demigods.
Some say this is the womb of salvation, the crimson birthing stool of redemption. I keep hearing that the cries on these creepy crags are the songs of deliverance and the weeping of loss is actually the promise of resurrection, but I must confess, it’s hard for me to believe.
Thunder and lightnings clash here, precipice prophets boom pronouncements that this God demands our best, that he isn’t satisfied until we give him all that we treasure most. On this mount, we are told he must have everything. All is an enemy that comes between this God and our hearts. It’s a battle ground of jealousy and consecration between the mortal and immortal.
How can I stand in such a place?
What strength have I against omnipotence?
What offering can I have torn from my breast that will satisfy this hunger?
What liquid of earth can atone in heavens courts?
What battle have I been born into?
What war is raging that I could ever hope of ending?
What Mountain was the prophet Micah seeing when he whispered?:
What can we bring to the Lord?
Should we bring him burnt offerings?
Should we bow before God Most High with offerings of yearling calves?
Should we offer him thousands of rams and ten thousand rivers of olive oil?
Should we sacrifice our firstborn children to pay for our sins? (Micah 6:6-7)
Did he hear the voice of the same angel who stopped Abrahams hand, when Micah whispered?:
No, O people, the Lord has told you what is good, and this is what he requires of you: to do what is right, to love mercy, and to walk humbly with your God. (Micah 6:8).
Did the prophet Micah see Calvary from this mountain?
What do you see?
What do you hear?
I am hearing:
“It is finished.”

Previous Five takeaways from the Hobby Lobby case
Next Piety and Patriotism, Perversion and Power