An estimated 122 million Americans celebrated St. Patrick's Day this year, according to The National Retail Federation — mostly be wearing green and going to parties. St. David's Episcopal Church in Spokane celebrated too, but not with Irish food and booze.

Parishioners honored him by forming a circle and singing to the tone of djembe and bodhran drums, by discussing Patrick's life and receiving communion. They venerated him with their weekly Celtic worship service.

“He had 28 years of active ministry (in Ireland), founded 700 churches. In Ireland there were 150 tribes, at least 40 of those tribes became Christian … and if you look at the landscape of Ireland you'll see that Celtic cross dotting the landscape of all the places where the mission of Patrick went,” the Rev. Elaine Breckenridge said. 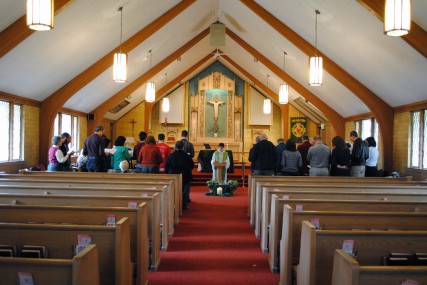 A quilt with a Celtic cross hangs at the front of St. David's worship hall. Every Sunday at 11 a.m. the church hosts a Celtic Eucharist service — a practice the church formally adopted in 2010. About 40 people regularly attend.

Breckenridge said she became interested in Celtic spirituality about eight years ago when she learned more about it from her then spiritual director. She became so interested she traveled to Ireland (twice) and Scotland (once) to experience the worship style and bring it back to St. David's.

“I think people are hungry for an experience of God,” she said, noting an interest in the Celtic program has grown throughout the years. She said people are tired of hearing doctrine, and want a worship style they can carry with them in their daily lives. Celtic worship is ecumenical and celebrates creation, the Gospel of Jesus and the spirit, “being above, below, among and within us.” 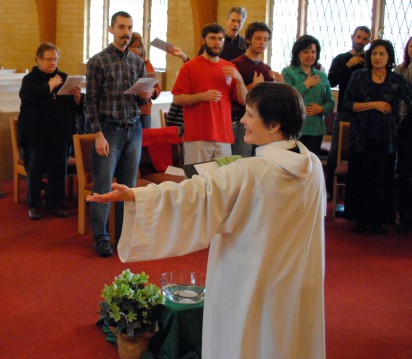 According to St. David's, “We honor our own experience and the insights and struggles of seekers, so the breaking-open of the Word is a task we share with the preacher. We honor beauty, the arts and imagination and storytelling in our liturgy. We believe worship should engage all the senses including our bodies, and so movement is an element of the worship…”

“What's important for me is worshipping with the whole body,” Breckendridge said.

On the fourth Thursday of the month the church hosts another Celtic Eucharist at 7 p.m. Breckenridge said people of various faiths attend and more dance is included than in the Sunday service. Jim Grady, who has been going to St. David's for 13 years, said the “creation theology” of Celtic spirituality is one of the main things that attracted him to Celtic spirituality, but not the only thing. 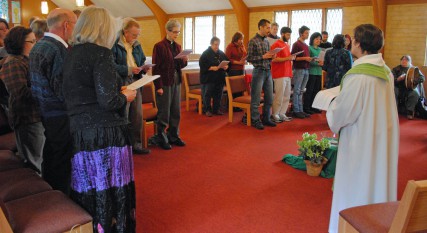 “It's the music, the physical setup, the circle. It's the whole package,” he said.

St. David's will celebrate a Celtic Easter at 7 p.m. on April 7. More information can be found on the church website. Additional photos can be found in our Flickr album.