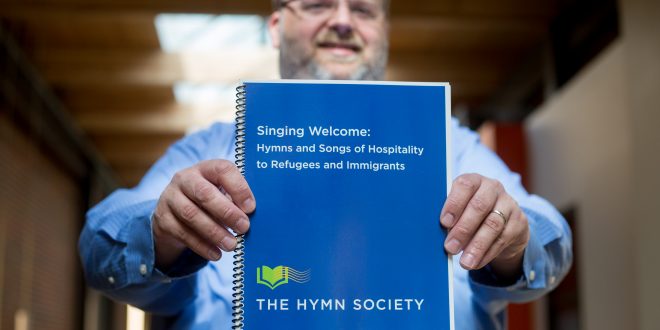 Two hundred (200) submissions in two weeks. That’s how long the expedited process was for creating Singing Welcome: Hymns and Songs of Hospitality to Refugees and Immigrants.

A single song can take years to write between the creation of lyricism and physical music. How did hymn writers from around the world create such a large volume of songs in such a short period of time?

The better question is “why” and not “how.”

“One of our goals was to make this available as soon as we possibly could,” Benjamin Brody, Professor of Church Music at Whitworth University, said. “Normally, a process like this would take closer to a year, and we really completed it in about three months.”

Brody is on the Executive Committee of the Hymn Society, a nearly century-old North American nonprofit organization. He said that the Singing Welcome collection took three months from the conception of the idea to the publishing of the songs.

Brody recollected a personal experience in the SeaTac airport the day after President Trump’s travel ban was released, explaining a scene of police outfitted in riot gear and protesters that prompted the collection.

“It was a moving experience,” Brody said. “Something that really got me thinking with this issue, particularly of welcoming refugees, ‘what are the skills or gifts that I have that I can contribute to this?’”

“The first thing that came to mind is my passion for helping congregations sing their faith,” he said.

From there, the Hymn Society took off with the idea. The working group that culminated the encouraging collection is nearly as diverse as the authors that contributed to it. Members included a Pakistanian pastor who started a church music school in Pakistan, an 80-year-old Catholic nun from Minnesota, an Evangelical Covenant pastor working toward a P.h.D. in worship in Chicago, a young Torontonian woman whose expertise is in global music, and a retired church music professor from a Baptist church in Alabama.

Many writers were impassioned by experience and definitions of faith.

“As a Mennonite, I value the voice of a congregation as the primary instrument of worship,” Adam Tice, a hymn writer and editor from Goshen, IN. who has five songs in Singing Welcome, said in an email. “Congregational song enables people to voice praise and lament together, and to internalize theology.”

Brody said the importance of providing hospitality to refugees is an issue that has brought together a breadth of churches. Singing Welcome is meant to amplify a widespread positive response.

“Hymns are one of the ways we express — and learn — our faith,” Barbara Hamm, a minister of church music in Benecia, CA, said in an email. “The church sings its faith, proclaiming that which it believes, and I want to be one of the people writing the ‘new’ songs to sing, songs that address the problems of our day and offer courage and hope in dealing with them.”

Hamm has played the piano since she was young and has written hymns since 2001. She wrote three hymns — both the texts and the tunes for each — were completed prior to the Hymn Society’s request for submissions but all were inspired by immigrants and refugees.

“My hope is that the hymns we sing in our churches will address the need for Christians to respond with ‘feet-on-the-ground’ faith to the crises of our day — poverty, inequality, racism, climate change and environmental degradation, xenophobia — and the resulting economic and political displacement of millions of people,” said Hamm.

Singing Welcome: Hymns and Songs of Hospitality to Refugees and Immigrants was published by Hope Publishing Company and GIA Publications and is free for download on the Hymn Society’s official website.