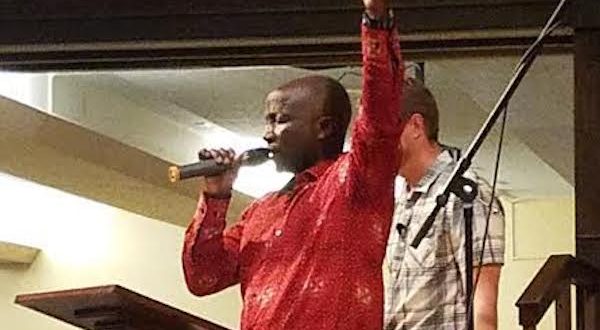 World Relief Spokane hosted a prayer event Tuesday night at First Presbyterian Church of Spokane in response to the Trump Administration considering zeroing out the number of refugees resettled by 2020, encouraging people to pray with refugees and for refugees.

The event began with Jackson Lino, community and engagement coordinator at World Relief Spokane, and the Neema Choir, a children’s choir, singing “There is Other God Like You.”

Once the song ended Mark Finney, director of World Relief Spokane, gave an overview of refugees and who they are.  He said worldwide there are currently 25 million refugees who look at spending at least 10 years in exile, and that more than half of refugees are children 18-years-old and under.

With the decision by the Trump Administration to consider capping the number of refugees admitted into the U.S. to zero, which is expected to be finalized on Oct. 1, Finney said that, by praying together, they can change that in the U.S. and help it go in the appropriate direction.

During the event, Finney explained how refugees have been coming to the U.S. before the country was founded, citing the pilgrims as people who were escaping religious persecution, but the process for refugees was not formalized until Congress passed the Refugee Act of 1980, which standardized resettlement services for all refugees in the country.

“The reasons that we’ve done this is because it aligns with our values as a country, it’s who we are as a nation of immigrants,” he said.

“Historically, it doesn’t matter which red, blue, purple, green and side of the aisles you’re on, we’re Americans and we believe it’s the right thing to do to support refugees because it’s who we are,” he said.

During the event, Finney explained how World Relief functions in assisting refugees and the services they provide regarding legal services, education, jobs, resettlement and so forth.  He added that, as a Christian organization, their work stems from their Christian faith and to stand with the least of these.

Later, he discussed his visit to a Rohingya refugee camp in Bangladesh where he was teaching in northeast India last year.

At the camp, he said he expected to experience a scene from “Schindler’s List” that was in greyscale with somber background music, but felt he was at his kids’ playground during recess because of the sound children laughing, running and playing everywhere.

Initially he described it as beautiful, until reality sunk in and realized these children would be in the camp for 10-20 years without access to education. He added that it was something he would not want for his kids and anyone else’s.

For those who are followers of Jesus, Finney said it is their responsibility is to love their neighbor and it is not just those who are closest to them but anybody around the world.

At the end of his presentation, Finney brought up the life of Sergey Brin, co-founder of Google, whose family came to the U.S. as refugees in the 1970s and one of the wealthiest people in the world, saying that there 25 million people like Brin around the world sitting in camps and people should see that they have a place in the U.S.

Finney then held a brief Q&A where he distinguished refugees from asylum seekers, how the reduced number of refugees has resulted in World Relief offices closing and how the word for foreigner, ger, appears over 90 times in Hebrew Scriptures and is linked to stories or passages that talk about treating foreigners as equals.

After his presentation, four refugees who are members of Spokane churches provided prayer for refugees around the world: pastor Aleks Kapriyan of Pilgrim Slavic Baptist Church, pastor Emmanuel Kassa of Fountain of Hope Church, Nou Vang of Hmong Fellowship at Southside Christian Center and pastor J.C. Clay of Spokane Karen Baptist Church Fellowship.  They told their stories as refugees and said prayers for persecuted Christians, refugees that are in exile, women and children who are suffering, and the U.S.

After the prayer session, Lino and the choir returned to the stage to sing “No Longer Slaves,” and “I Am Not Forgotten,” inviting attendees to sing and dance with them.

At the end of the event, Finney said that he hopes people continue to pray with refugees and for refugees as well as encouraged them to volunteer at World Relief, learn more about the organization, send the postcards that were given to them at the event to offices of local elected officials and other actions.  He then asked attendees to stand with the vulnerable and pray for what was on their hearts and recited the Lord’s Prayer.

“The most important thing is that we need to be in prayer, that it really is up to God to control the larger forces in our world and in our country,” Finney said after the event. “I’m so excited that people from so many different traditions and churches came together to recognize that the call of God to stand with the vulnerable transcends our politics, or our ethnicity or our nationalities.”

Previous Political signs say who we vote for, not who we are
Next Ask A Pagan: Pagans and Magic