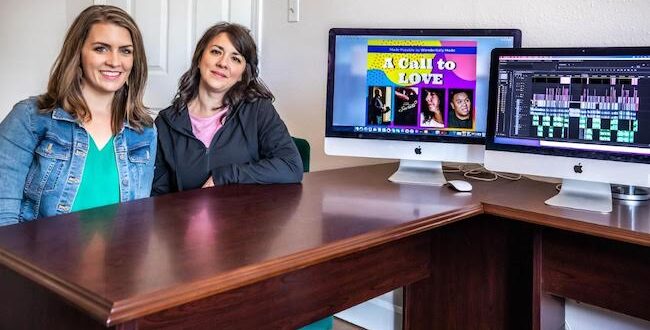 Nichole Mischke and Jennifer Burrows produced "A Call to Love"

UPDATE: Due to high demand, screening of the documentary is now open for all of June.

Unworthiness. Depression. Suicide. These are several fruits that result from any theology, especially within Christianity, that are non-affirming toward the LGBTQ community.

“We have to ask ourselves, ‘Are these good fruits?’” said Jennifer Burrows, co-founder and board president of Wonderfully Made, a nonprofit whose mission is to unconditionally love and support LGBTQ inidividuals. “Are we understanding the message of the Bible correctly?”

These are some of the questions that are explored in Wonderfully Made’s new, locally-produced documentary, “A Call to Love.” It will stream for free every weekend this June, starting on the fourth, in honor of Pride Month.

An Uncovered production by Nichole Mischke Media, this two-hour journey tells the stories of mothers of gay children, self-identifying LGBTQ individuals, a clinical psychologist and an evangelical pastor of an LGBTQ-affirming church. Mischke and Burrows said it calls viewers to listen to stories unlike their own — to have compassion and to challenge their belief systems.

“I understand those that hold on to their dogma with a clenched fist,” Burrows wrote in a Wonderfully Made Facebook post about the documentary.”I used to be that person.”

Burrows said her son came out to her about eight years ago and is her inspiration for co-founding Wonderfully Made.

“Even though we loved our son every step of the way, the fact that we could not accept something so integral to who he was, that he did not ask for, had no control over and tried desperately to pray away and deny, had a profoundly damaging effect,” Burrows said in an email.

She said church mistreatment is harmful.

The seeds for this documentary began in the lives of the people featured in it, but the push to make this an actual documentary also grew from Mischke’s life.

Having suffered with bulimia for nearly 10 years before admitting it to anyone led Mischke onto a path of shame and later led to ultimate healing when she uncovered her struggle. From there, she set out to uncover other people’s stories of pain and shame to help them be free.

“I had thought I had known what love from God was and what self-love was, but I had no idea,” Mischke said. “And in finally telling people that and seeing that people were still there loving me, I finally experienced what it actually felt like to be loved and treasured by something greater than myself and be here for a purpose.”

She said she sees this same transformation when LGBTQ people are affirmed for who they are and supported.

Burrows and Mischke met randomly some years ago when they were showcasing their businesses in neighboring booths at a health fair.

“We’ve been joined at the hip ever since,” Burrows said.

Although Burrows and Mischke did not originally plan to make a full documentary, they said they see this project as something that was meant to be.

“I have to say God’s hand was in this [documentary] because it just flowed,” Burrows said.

A ‘Labor of Love’

Mischke said “A Call to Love” was a labor of love for her these past two years, despite it being the most daunting project she had ever tackled. The longest pieces she produced up till then had been 15-minutes long.

“It’s been like the greatest gift to get to work on this project,” Mischke said. “The stories are so powerful.”