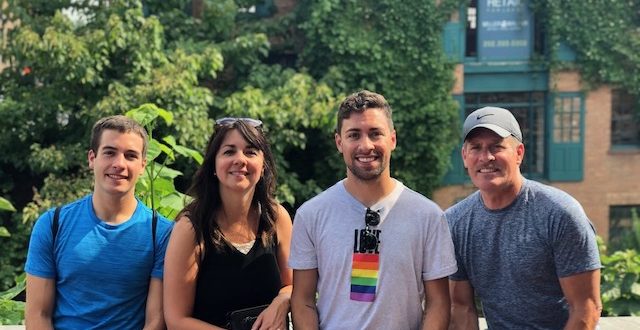 Jennifer Burrows, co-founder of Wonderfully Made and Branches church member, with her family/Contributed

Wonderfully Made Aims to Bring Dialogue, Understanding about LGBTQ Persons of Faith

The co-founders of the non-profit Wonderfully Made seek to assist the Christian community on how to love the LGBTQ community well—like Jesus would—one story at a time.

On Thursday, (Oct. 17), at 7 p.m. at the Bing Crosby Theater, they, along with local church, Branches, invite the community to listen to three speakers as they share their stories on how they reconciled their Christian faith with an affirming posture toward the LGBTQ community. Tickets are $10, and can be purchased online or at the door the night of the event.

First on the agenda are Rob and Linda Robertson. They will share their story of being parents of a gay son, who they lost in a drug overdose, the story of which has been immortalized on Linda’s blog, Just Because He Breathes.

They tell their story in the hopes that other parents will help prevent their LGBTQ children from taking their lives either by suicide or drugs. The couple encourage parents to be supportive as their children come out and come to terms with their gender and sexuality.

The next speaker will be Justin Lee, author of “Torn: Rescuing the Gospel from the Gays-vs.-Christians Debate,” which is his memoir and journey through the Scriptures as he came to terms with being a gay man within his southern Baptist upbringing.

He offers a unique perspective of maintaining an affirming LGBTQ stance, yet promoting a graciousness and space for mutual understanding with other Christians who do not. Lee is also the creator of what used to be known as the Gay Christian Network (now known as Q Christian Fellowship), an online community for gay Christians of all biblical convictions to share their stories.

Jennifer Burrows, a mom of a gay son and one of the co-founders of Wonderfully Made, was introduced to these three speakers by her son, as they were processing what to do and what it meant when he came out to her and her husband.

What she experienced when introduced to these two stories was unexpected and changed her life.

Burrows and her husband were brought up in the Jehovah’s Witness faith tradition, and she remembers feeling fear about God from her earliest memories. The JW’s had predicted the world would end in 1975, and she remembers, as a 3-year-old, hearing her parents and her aunt and uncle talk about where to take the kids so they would be safe.

“That was God for me,” Burrows said.

She also remembers as part of her faith journey going to bed with anxiety and wondering, “Am I loved by God? Am I doing enough? Am I good enough? Will I make it?”

“And so it took a lot of years to overcome that,” Burrows said. “And essentially that’s why when we found out about our son, it was just doubly hard because I had all of that baggage to deal with.”

Fast-forward to starting a family and not wanting her children to grow up with that same experience, she and her husband settled into a nondenominational Christian church that focused on God’s grace. It was a community they enjoyed for a while, until their son came out.

The leadership of the church aligned with the traditional, orthodox understanding of human sexuality, which she and her husband also subscribed to at the time. They met the Burrows with a sympathetic ear at first.

However, in time, Burrows began to see what she was being told and the way it was presented to her family was causing her son to become more and more depressed.

In the last conversation with her pastor, Burrows remembers telling him this teaching wasn’t working and helping her son. So, what should they do next?

“Ultimately, what we were told was if he was going into this state of depression and having a difficult time, it was basically his fault because his eyes were not focused on Jesus,” said Burrows.

The pastor also told them that their son was actually making himself an idol.

“I was really shocked,” said Burrows. “I was like, oh my goodness. This doesn’t make any sense to me.”

She felt like the pastor didn’t care about her or her family.

It was around this time, Burrows’ son asked her to read Linda Robertson’s blog. She just sobbed after reading it.

“It was a huge wake up call for me,” said Burrows.

Robertson’s story helped her realize that the teaching and counsel she received from her pastor was damaging. She began to see that this teaching could actually lead someone to committing suicide. She needed to find a better way.

She ordered it reluctantly because she thought it would be “some gay agenda book” she was taught about avoiding in her church. Instead, she was blown away. So much of what Lee wrote about was the same thing her son was saying to Burrows and her husband. Neither of them could put the book down.

“I’ve read that book like three times, and I tell people it became my Bible because there was so much of the Bible that I couldn’t make sense of anymore,” said Burrows. “The only thing that made sense to me during that whole struggle that we had was that I knew how much we loved our son, and I knew that God does love us.”

Today, Burrows is an LGBTQ affirming Christian and attends the only local affirming evangelical Christian church, Branches, which is the co-sponsor of Thursday night’s event.

Because of Lee’s and the Robertsons’ journeys and the impact they’ve had on her story, Burrows had this “crazy” idea of bringing them to Spokane to speak. And that “tiny” thought led to forming Wonderfully Made, which gets its name from Psalm 139:14.

It says, “I praise you (God) because I am fearfully and wonderfully made; your works are wonderful, I know that full well.”

This verse is at the heart of what Burrows and her fellow co-founders want the LGBTQ community and those who love them to understand. They are wonderfully made, just as they are.

See video below of Burrows’ letter to God about her gay son, produced by Nichole Mischke Media.

Your financial support allows FāVS to continue to publish news briefs like this. Please consider making a donation today.