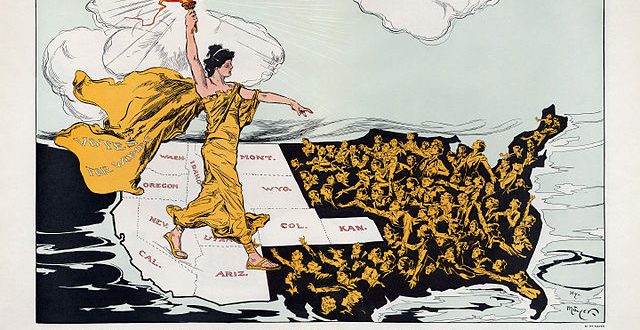 A 1915 illustration by Henry Mayer, titled “The Awakening,” suggested the geographical force behind the suffrage movement. Credit...Cornell University, The PJ Mode Collection of Persuasive Cartography

Red Grammer ends his song about gender equality with these words, echoing a theme written by Abigail Adams to her husband John at the 1776 Continental Congress: “Remember the Ladies, and be more generous and favourable to them than your ancestors.” One hundred forty-four years later, the ladies got to vote.

But women have yet to reach equal partnership with men in our evolving civilization. Ancient Greece and Rome, as well as a few emergent 18th century European democracies, excluded women from voting. By mid-19th century, women began to seek equality in many avenues, but particularly in voting. The first place to “award and maintain women’s suffrage continuously” was Pitcairn Islands in 1838.”

Less known was a conference in July 1848 in Persia, a Muslim nation where men had multiple wives, and women were required to remain veiled in public. There Tahirih, a religious scholar in her twenties, struck a forcible blow for the emancipation of women. She was known as a “fair and spotless emblem of chastity and the incarnation of the holy Fatima.” Tahirih was a follower of the Bab, a prophet who proclaimed a new religious era. The only woman at that conference, she arrived veiled. Partway through, to the consternation of many there, she unveiled, proclaiming: “This day is the day of festivity and universal rejoicing, the day on which the fetters of the past are burst asunder.”

About a month later in Seneca Falls, New York, another conference was held, the first of its kind to “organize a national movement of women’s rights.” Attendees agreed that “American women were autonomous individuals who deserved their own political identities.”

Opponents thought so. It took seven decades and many struggles until, in 1920, the 19th Amendment granted suffrage to all women. Three years later, in another uppity move, two women drafted and introduced in Congress the first version of an Equal Rights Amendment. It sought to prohibit “all discrimination on the basis of sex.” Ninety-eight years later ERA has yet to be ratified; women still suffer injustices perpetuated by their second-class status. Although the 19th Amendment has made our country better, the Washington Post observed, “the history of women voting is still a history of having representation without being represented.”

What about the rest of the world? It varies. Women enjoy relative emancipation in some areas but are culturally dominated, often by religion, in others. Although New Zealand was the first nation to enfranchise women for national elections in 1893, enfranchisement is still spreading as nations move to democracy from other forms of governance.

A century after Tahirih’s dramatic unveiling and the Seneca Falls conference, the United Nations’ Universal Declaration of Human Rights recognized that “the foundation of freedom, justice and peace in the world” is “the inherent dignity of the equal and inalienable rights of all members of the human family,” including “the equal rights of men and women.”

The first World Conference on Women in 1975 coincided with International Women’s Year. It was followed four years later by the Convention on the Elimination of All Forms of Discrimination against Women. Later conferences expanded on the vital role of women in all endeavors. In 2012 the focus was the importance of women in sustainable development and climate change. Citing need for action on three fronts – social, economic, and environmental – the UN recognized women as “central to progress in each area.” These efforts require “empowering women and dropping discriminatory barriers in diverse areas, among them agriculture, energy, health, education, employment and disaster risk reduction.”

Real change begins with the individual. It must come from a change of heart. It must be spiritual. Commendable as they are, earlier efforts haven’t sufficed; proclamations, declarations, even legislation aren’t enough.

Tahirih anticipated the day that is dawning. The faith she embraced heralded the Baha’i faith. One of its central tenets, explicated in its sacred texts, is the equality of women and men. Just as secular society has seen progress, so have many faiths gradually embraced gender equality.

Earlier columns explored three onenesses – God, religion, and humankind. Gender equality is the next logical step. For too many millennia, women have been considered inferior. National and international efforts are alleviating that, but progress has been painfully slow.

As 19th century women sought emancipation, Baha’u’llah wrote: “Women and men have been and will always be equal in the sight of God.” As his son Abdu’l-Baha explained, “The world of humanity is possessed of two wings: the male and the female. So long as these two wings are not equivalent in strength, the bird will not fly.”

Previous Abraham Lincoln, Christianity, and Liberal Religion
Next Holding On In The Letting Go In A Pandemic: Dismantling the Lines