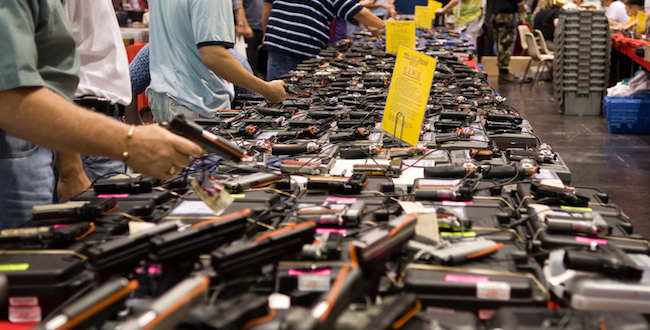 A gun show in Houston, Texas./Wikipedia photo by glasgows - Flickr

Woe to Our Gun Lust

Have we become so accustom to mass shooting and the daily gun violence that we can’t seem to find any action we can take to curtail the violence? Why are Christians so quiet? When Sandy Hook broke into the news, I was sickened. The aftermath sent me into a depression. See, I have been through it all before from Columbine, Aurora, Virginia Tech, and so many others. So, so, so, so,… many others. And will see many more needless horrors that form an altar to our gun lust and growing rejection of love.

When the recent gun bills failed in the Senate because of Democrats playing politics and Republicans bowing to their own interest, despite a vast majority of Americans wanting background check loopholes closed, I was both appalled and unsurprised. Both sides got what they wanted and they both put party above country. Unfortunately, more people will die needlessly.

The damage to the country’s spirit maybe greater. We are now seeing a sinking acceptance of mass shootings as the new normal. As if the murder and sudden death were spoken into existence by the pagan gods of war and we can’t do anything but accept it as if it were weather. We look at the chance of violence as if it were the same chance of rain. Have we fallen away form decency and love so much that we will sacrifice on the bloody altar of gun lust our neighbors, families and our very children? As Christians who goes into prayer, have the majority of Christians so abandoned the Gospel of the Prince of Peace that they are will to trust the cold, hard steel of an AR 15 rather the Lord and Savior. I refuse to believe this and must proclaim the Gospel of repentance.

To be clear, there is no realistic call to ban on all guns. Yet, guns that were created for the purpose of killing large groups of people… should we want civilians to have these?

At the end of Moses’ Sermon that is in Deuteronomy, God places two choices before the people, that of death and life. He admonishes the people to choose life. We are not powerless. If we choose death and the instruments of death over the life, then woe to us. For the deaths at Pulse night club, at Sandy Hook, at all of the numerous and lost murders in the thousands just this year at the blood altar of the Pagan God Mars, or the to numerous deaths of innocent children and adults because their people choose to bring a guns into the home. Woe to us if we continue to choose death over life. For God will not forget as Jesus weeps on the cross for our react of love.

Two choices before us. God call us to  choose life!