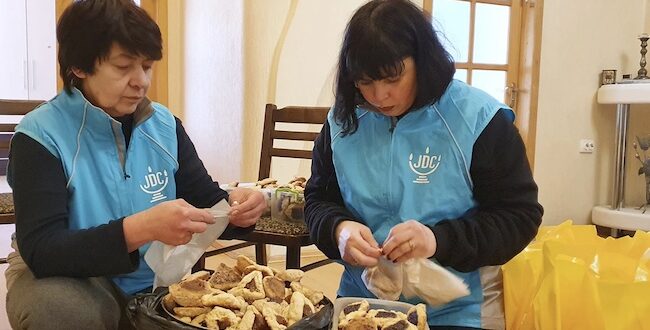 In between air raid warnings, local Jewish volunteers from JDC and the Migdal JCC bake and package hamantaschen for traditional holiday food baskets to be delivered to needy elderly and families in Odesa, Ukraine, March 15, 2022. Photo courtesy of JDC

As Jews around the world gather today (March 17) to celebrate the holiday of Purim, marking the deliverance of ancient Persia’s Jews from a genocidal plot, their minds and hearts will be turned toward the crisis in Ukraine. They will be focused on its impact on a Jewish community whose storied history is in danger of coming undone.

While Jews are not being specifically targeted, this conflict is deeply personal for many of us. After all, many Jews in America, including me, have roots in Jewish communities in Ukraine and in bordering countries like Poland, which is now accepting millions of fleeing refugees, including thousands of Jews. I was just witness to their suffering in Przemysl, Kazimierz Dolny and Warsaw when I recently visited.

It is in these cities, and so many others across Moldova, Romania and Hungary, where refugees are receiving food, medical care, accommodation and warm connections with the Jewish communities taking them in. While some would like to return to Ukraine, many are deciding where they will go next. Many Jewish refugees will opt for Israel and others are undecided in the face of heartbreaking separations from family left behind.

I heard stories about a wheelchair user who made the harrowing trek alone and a set of frail and weak grandparents in need of urgent medical attention. The most haunting was a mother with her 19-month-old baby who I personally met. She shared with me that she fled Kyiv after waiting days for a train. Once she was on board there were many people pushing and not enough food.

By the time she crossed the border after hours of waiting, she was in desperate need of baby food and shelter. Her husband had to remain in Ukraine and she would now need to figure out her next steps without him. She was only 22.

She, and millions of other refugees like her, are escaping terrifying conditions — bombings, food and water shortages, curfews and fear for the lives of their loved ones. The Jews among them leave a community of 200,000 Ukrainian Jews, part of an enduring legacy that stretches back thousands of years.

The Jews of Ukraine have contributed to Jewish civilization in outsized ways — the Hasidic religious movement was founded there, Yiddish theater and literature blossomed in its cities, and Zionism took hold among luminaries like poet Hayim Nachman Bialik.

These Jews stubbornly and bravely survived pogroms, the Nazis, the Soviets, the early years of the post-communist life and several periods of Ukrainian political upheaval. Out of this torrent of death and unrest, they have built strong, thriving Jewish communities that would look familiar to any of us in New York, Miami or Los Angeles.

This achievement is the result of the three decades of investments by local Jews, global activists and philanthropists and groups like my organization, the Joint Distribution Committee, to revive Jewish life after 70 years of communist repression.

As a result, Ukraine is now home to flagship Jewish community centers, synagogues, human services, volunteer groups, summer camps and a variety of programs building Jewish identity among many generations of Jews. In an incredible twist, it is often teens and young adults who are teaching their grandparents and parents what it is to be Jewish after decades of this identity being denied to them.

This achievement also explains the outsized response of Jews to this crisis and why tens of millions of dollars in donations have been raised for the care of those Jews who remain behind and those who have fled. Solidarity is taking form in grassroots concerts, rabbinic sermons, and by baking and selling hamantaschen — the traditional tri-cornered cookie for Purim — to support those in need and infuse even greater urgency into the ancient story.

The hero of the Purim tale is Queen Esther, who bravely risked her own life to save her people from certain death. In the last two weeks, I have seen the work of numerous Esthers carrying on that legacy, including the indefatigable Polina Rysker.

Polina is the director of a Jewish community center in a Ukrainian city near the Black Sea. In between air raid sirens, she is organizing evacuations and the distribution of critically needed essentials to hundreds of needy Jewish elderly served by our social service center. A former scientist in her 60s who inherited the bravery of her Red Army surgeon grandfather, Polina has committed herself to this work, which she describes as a calling.

Even while leading volunteers delivering food packages and hosting online support groups for those sheltering in place, she’s made time to teach local children and their parents about the upcoming holiday. “Remember the history of Purim,” she told them in a resilient tone, “Remember the miracle and we will believe in it with you.”

Our job is to sustain that miracle, the miracle-makers, and to rebuild, once again, what may be lost.

(Ariel Zwang is the CEO of the American Jewish Joint Distribution Committee, or JDC. The views expressed in this commentary do not necessarily reflect those of Religion News Service.)

Previous We Are One With The Wild
Next The Afterlife: When Life Begins