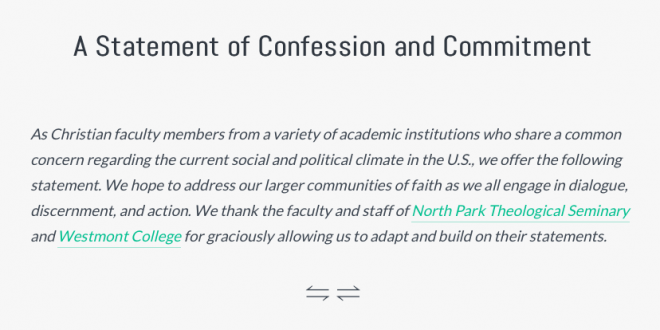 Eighteen professors at Whitworth University have signed a Christian “Statement of Confession and Commitment” meant to unite faith communities in dialogue and action.

Whitworth professor of communication studies James McPherson, who signed the statement, has been concerned with fair treatment of others throughout his life, which is one reason he offered his signature.

“As a middle-aged, white, well-educated guy, I’m as privileged as they come,” he said. “Recognizing that is important and affirming the dignity of others as this statement supports doing is pretty obvious and, of course, a pretty easy thing to do.”

Christian educators from a plethora of universities who signed the statement affirm their, “deep resolve to pursue truth, reason carefully and rely on sound evidence.” Furthermore, they commit to representing vulnerable and marginalized communities as “the gospel demands,” and acknowledging their own failures and privileges.

The statement ties in with Whitworth’s own mission statement, which includes the “importance of honoring Christ and serving others,” McPherson said. It appears on  www.confessingfaculty.org after two professors from Princeton Theological Seminary and Fuller Theological Seminary thought  faculty would be interested in signing the work, and is adapted from statements of Westmont College and North Park Theological Seminary.

The opening statements include comments on a “contentious election and post-election season marked by fear, polarization and violence.” As a result, the political climate continues to reveal longstanding racism, misogyny, nativism and economic disparity, according to the statement.

“This statement is ready to announce longstanding, national social sins but also interrogate the authors and allow them to interrogate themselves in times when they have not responded in the past,” Gonzaga University associate professor and director of undergraduate religious studies majors John Sheveland said. “I think that’s expressing the unifying principles that they’re trying to get at in the Biblical text.”

Sheveland appreciates the statement’s strong biblical basis and language. He specifically cited the statement’s mention of verses from Philippians and Ephesians that emphasize the presence of human beings in one body of Christ and our obligation to “speak the truth in love” as a result of such unity.

“It seemed to me that their use of biblical language was done relatively persuasively in a non-ideological way, but in a way that, to my eye, captures those motifs in the Bible that are unifying and are about drawing a sense of solidarity between lines of human difference,” he said.

Gonzaga faculty, however, have not signed the statement. It surprised McPherson that Gonzaga — a Jesuit school in the Catholic tradition — faculty had not signed.

The language of the statement seems to support an “evangelical” Christian understanding, which may be the reason it has not circulated among faculty at Gonzaga, Sheveland said. Nonetheless, he supports its tenets. Sheveland has advocated a statement from the Catholic Theological Society of America on refugees and forced migration, and others from the Southern Poverty Law Center and the American Civil Liberties Union.

Gonzaga religious studies faculty focus on the opportunities their courses pose in terms of diversity and inclusion, Sheveland said.

“These concepts are no longer abstract and we actually have students that feel exposed,” he said. “We have white women students who feel physically at risk simply from the election. We have students of color who are finding themselves shocked at the kind of tone-deafness among many other students on campus to do with issues of inclusion, representation and the difference color makes in daily living. I think we’re really aware of that as faculty, and we’re trying to design or redesign courses in ways that are more likely to present tools.”

Whitworth encourages its faculty to incorporate their faith into teaching, McPherson said. For example, some faculty members pray with their classes before they begin. In his journalism classes, McPherson deals with issues of on and off-campus diversity and ways that reporters could interact with members of underrepresented groups.

He also believes Whitworth has made a concerted effort to focus on diversity issues in line with its mission statement in recent years.

“The freshman classes the past couple of years have been more diverse in underrepresented populations than other institutions in the region,” he said. “I am proud of the work that the university has done in terms of, for example, supporting undocumented students. I realize this would be a horrible and fearful time for them.”