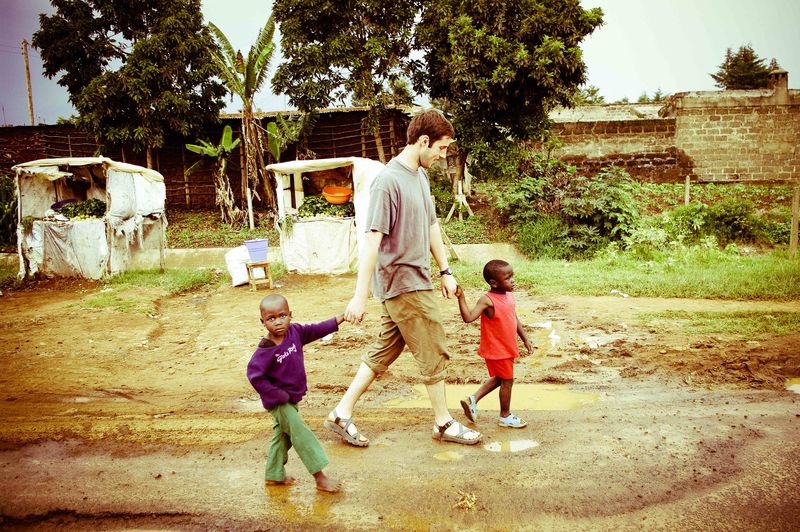 With eye on Kenya, graduate hopes to build community

Scott Jones won’t be using his graduate degree in architecture to find a high-paying job. After graduating on Saturday, he will be starting his own nonprofit organization, and his first project is in Kenya.

Jones, a 25-year-old master’s candidate in architecture at Washington State University, has been working with friends and colleagues to create a project called “Thrive.” Thrive’s goal is to send a shipping container filled with books, computers, tools and building supplies to Eldoret, Kenya. Then, the community of Eldoret must invest their own labor, local materials and staff to turn the 400-square-foot shipping container into a 7,000-square-foot vocational training center.

“It’s like a box of Legos,” Jones said. “There are instructions and materials, but the community has to do the rest.”

For now, Jones must focus on funding. Along with donated materials, Thrive will need to raise about $100,000 for the first phrase of the project. The used shipping container will cost around $3,000, and will contain the materials needed to build the center, a library, and a cyber cafe with internet access in Eldoret.

He is currently working on business plan development, grant writing and approaching funders like USAID and the Hewlet Foundation, which support socially equitable development. After raising the money for the original investment, Jones hopes to continue to support Eldoret’s center through community development, guest lectures and local government.

“We will put in the seed money, but part of the business plan is about the autonomy of the program,” Jones said. “It’s pretty well documented that if you don’t provide a sense of ownership, programs will ultimately fail.”

The goal is to provide residents with the resources they need to find jobs, learn new skills, and learn preventative medicine and family care, Jones said. The container will hold tools that will allow people to become carpenters, mechanics, plumbers, electricians and more, along with computers and equipment to access the internet to further their education.

Jones hopes the center in Eldoret will become a prototype that can be applied to any marginalized community throughout the world. He hopes to learn from this first project, refine his idea and then take it to a foundation that can implement it on a larger scale.

Darby Kruger, the founder of the nonprofit organization Agape Project International, met Jones in an airport in Africa where they had both been doing volunteer work. Kruger saw potential in Jones, and has been working with him every since.

“Of every hundred individuals that go through that school, Scott is one of the ones worth investing in, whether it’s monetary, time or access to people,” Kruger said. “He is not a typical individual or student.”

Jones hasn’t been creating Thrive alone. Barnstone and Antony Mwengi, a civil engineering student at WSU, have played a big role in the development of the proposed structure for the center. They also have a community partner in Kenya. Jones’ fiancé Annie Holten, a 26-year-old public relations student, has taken the lead on communication and web development.

Jones said anyone with an idea or knowledge that could further the project would be of great worth to the team. Finalizing Thrive’s first project will involve grant writing, construction knowledge, accounting, legal aid, promotion and more. Jones believes that all students have knowledge that could be used for the greater good.

Finance ideas, entrepreneurial skills or even ideas for lectures to teach at the center are all aspects of the project that still need help, according to Holten.

Bruce Pinkleton, a WSU communication professor, has helped with the promotional and research aspects of the Thrive project. He hopes that other students can see that they are also capable of making a change in the world.

“It would be cool to have had a part in any way in something so impactful for the human condition. It’s something that we’d all like to think, that at the ends of our lives we did something good,” Pinkleton said. “That’s the benefit of education – being able to give something back is an important contribution that you can make, and that’s what it’s all about.”