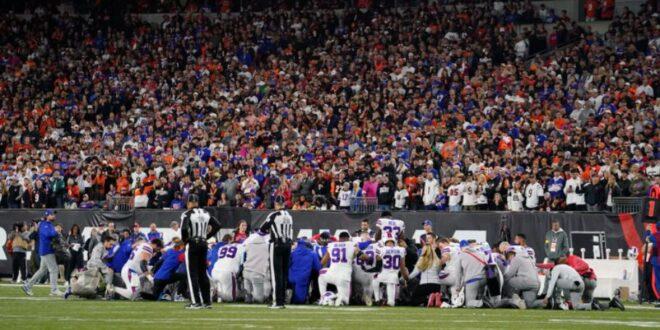 Buffalo Bills players pray for teammate Damar Hamlin during the first half of an NFL football game against the Cincinnati Bengals, Jan. 2, 2023, in Cincinnati. (AP Photo/Jeff Dean)

The league is still reeling from Hamlin’s on-field injury on Monday night.

As NFL players prepare to take the field for the last Sunday of the regular season, the Rev. William Barber II, prominent pastor and activist, offered a prayer for NFL players and Damar Hamlin, the 24-year-old Buffalo Bills safety who went into cardiac arrest after making a tackle in Cincinnati Monday night (Jan. 2).

His prayer also stressed the humanity of Hamlin and all NFL players as the league played its first full slate of games since Hamlin’s injury. “We pray for the league itself, the NFL, that it may never see the players as just pieces of an economic engine, but as people without whom the sport would not exist,” he said.

Barber asked for comfort for every player and player’s family shaken by the sight of Hamlin receiving CPR for nine minutes on the field, and for all NFL players who have been injured by the game.

“May this moment cause us who see the game recognize the players as people, not just competitors on a field, but fathers, brothers, uncles, husbands, sons, and grandsons. Help us, oh God, to repent of all the times we have forgotten this.”

Demaurice Smith, executive director of the NFL Players Association, thanked Barber for the prayer and said in a statement that he and Barber were “both moved by the unity on display not only by Bills and Bengals players, but by NFL players across our league and everyone in our community.”

Barber’s prayer is one of several public invocations for Hamlin since Monday night. Bills chaplain Len Vanden Bos led a prayer as players and staff knelt in a circle at Paycor Stadium in the moments after Hamlin’s injury. ESPN analyst Dan Orlovsky prayed for Hamlin on air on Tuesday.

Barber’s prayer asks God to heal Hamlin, and offers praise for his improvement — he remains in critical condition at the University of Cincinnati Medical Center but has made good progress and is breathing on his own, the Bills said on Twitter Saturday afternoon.

Barber, a Disciples of Christ pastor in North Carolina, founded the Repairers of the Breach advocacy organization, and co-leads a modern resurgence of the Rev. Martin Luther King Jr.’s Poor People’s Campaign. He recently announced that he will lead a new center for public theology at Yale Divinity School.

Barber’s prayer celebrated the millions of dollars donated to the Chasing M’s Children Foundation, a GoFundMe started by Hamlin in 2020 that provides toys and support for children in need in his hometown of McKees Rocks, Pennsylvania, just outside of Pittsburgh.

Hamlin’s on-camera injury has highlighted the Christian elements of NFL culture while reigniting debates about the safety and ethics of the sport.

Barber concludes his prayer by asking God to remember every person in the human family, especially those who face sudden tragedy. “Let this moment open up our conscience to care about all people in need and remind us how quickly in the blinking of an eye things can change for any family.”

That the peaceful way of Christ finds its way into a football game, a military occupation, a drug deal, and a rape …all seem likely to me. We must critique our culture’s masculinity, just as Jesus did (with the help of a few Marys!)

Do We Worship at the Church of the NFL? - SpokaneFāVS

[…] The on-field outpouring of prayers for Damar Hamlin is understandable, given the immediate shock of the cardiac arrest he suffered during the January 2nd “Monday Night Football” game. The ongoing prayers for Hamlin and support for his charity are in many ways admirable. Hamlin’s charitable works are particularly celebrated in Kathryn Post’s “William Barber Points to NFL Players’ Humanity in Prayer for Damar Hamlin.” […]