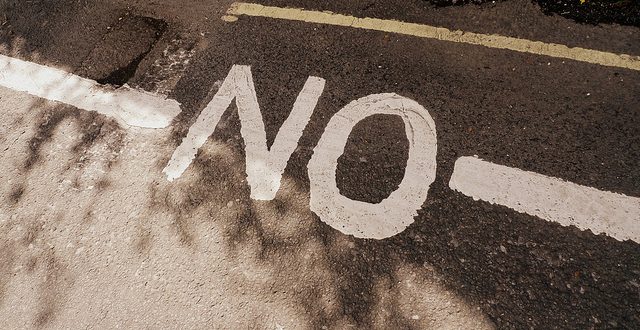 One of the “rules” I live by is something I learned a while ago and I’d like to share it with you: If I will not let God tell me “no” and be obedient to it, I’ll never hear him say “yes.”

For example, in the spring God told me I wasn’t to go to Maine this summer as I’d hoped. The answer was no. Take it or leave it. I was surprised by how emphatic he was but I took it. I was saddened but I figured God had a reason. This wasn’t so much a test of faith as a test of my obedience. And that test is paying dividends already.

If I had gone to Maine, thinking I was just imagining God’s “no,” I wouldn’t have been available when my granddaughter arrived for a visit in mid-July. I wouldn’t have been able to take her to an aquarium and on a research cruise, where her robust enthusiasm gave me an entirely new view of who she is. I wouldn’t have spent quality time with her – and later her family, after I drove her home.

I also wouldn’t have been available the past two weeks (and this coming week, too) to replace my vacationing friend, who normally handles the digital lyrics display for our prayer meetings.

If I’d gone to Maine I wouldn’t have had the time I desperately need to find a literary agent for my manuscript. I have spent a good chunk of the summer combing through agents’ Web sites in search of the right one, and I was getting disheartened – until Sunday, when I finally found an agent whose background and interests are very much like mine.

In short, by going to Maine I would have thrown away all sorts of opportunities to do good for others and for myself. Obeying God’s “no” to one desire allowed me to hear “yes” on a whole bunch of other desires. But that’s not the reason I obeyed his “no.” I did so because I am starting to really trust his voice, even when he says things I disagree with or protest.

God really does know better than I do. And the more I listen to him, whether he explains himself or not, the more I learn to trust that everything will turn out well in the end. “All things work together for good in the hearts of those who love God, who are called according to his purpose.” (Rom. 8:28).

Previous Second rally planned today in Spokane in response to Charlottesville violence
Next One Heart Spokane continues to grow with additional location on Pacific Ave.