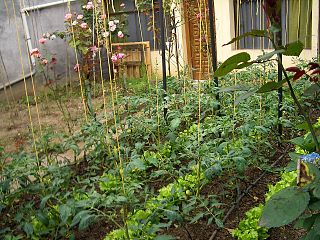 Urban farming near an apartment complex/Wikipedia

At first glance, Cleveland, Portland and Seattle may not have a lot in common. But look deeper. Each of these cities has adopted an urban farming ordinance to encourage local property owners and would-be entrepreneurs to grow their own food.

On March 24, Spokane’s City Council will vote on whether to join the ranks of urban farming cities with a yay or nay on Ben Stuckart’s proposed change to city zoning laws. The 2-year pilot program would allow people to keep market gardens (meaning they can grow what they sell on their property, such as fruit, vegetables or flowers) and certain kinds of animals within city limits.

The push for urban farming is a result of popular demand by Spokane’s residents, according to City Council President Ben Stuckart, a leading force behind the movement who has worked with the city’s planning department for months to get the project off the ground.

Stuckart sees urban farming as a way to improve the walkability of Spokane’s neighborhoods, increase consumption of locally grown food and keep dollars spent on food closer to home.

“I think it’s probably the largest opportunity we have to localize our economy,” he said. “Around three percent of what we eat is locally grown.”

One of the only cons to the program the way it’s currently written, Stuckart said, is that participants have to get a business license to sell products from their property. He hopes that the $55 cost won’t be a cost barrier, and hopes to eventually get funding to subsidize the cost of business licenses if farming becomes popular enough.

It seems to have a wiling number of participants — more than 100 people showed up for an open house about the project in August, and Stuckart says local farmers are behind it. They see it as another positive push for locally grown food items.

“I worked closely with the farmers’ markets to make sure they don’t view this as a threat,” Stuckart said.

Currently, the farming project is slated to change zoning laws in the city’s 13 City Block Grant Development (CDBG) neighborhoods, the lowest-income neighborhoods in the city. However, after reviewing the initiative, the planning department recommended an expansion to the whole city, which the Council has to vote on.

“People were walking up and down buying flowers,” he said. “It really enhanced the walkability of the neighborhood.”

He has a similar vision for Spokane.

“We’re following the lead of cities that have been doing some really great work.We need to be more sustainable as a community.”