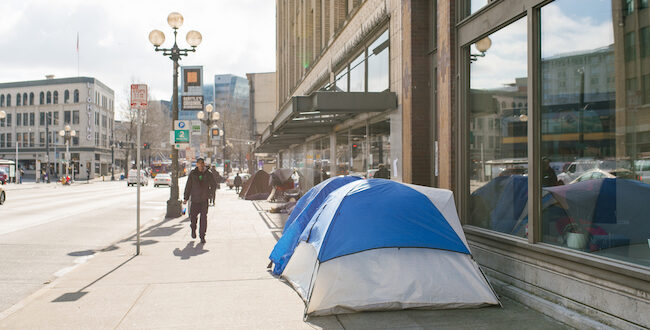 Homeless tents on a city street/DepositPhotos

At the time of this writing, I will soon have lived inside for six years.

In those six years, I have largely lived alone. I have mostly paid my rent on time each month — or pretty close. I’ve been separated from my former life in the San Francisco Bay Area by six years worth of new friends and new life circumstances.

Yet I often still feel homeless. Why?

The feeling baffles me. But it’s damn hard to shake. In no way can I reasonably identify myself as “homeless” — or “houseless” or “unhoused” or any similar label. Such terms no longer apply to me, because I simply live indoors.

The fact is, I’m not outside anymore. I’m inside now — and that makes for a pretty huge difference in the way I am viewed by others. I’m inside — thinking that at any moment, I could be outside again. Most of the people with whom I associate are also inside. Unlike me, however, they’re not thinking so much about the “outside” that is to be had. Though the threat of homelessness may weigh on them, they — unlike me — “can’t imagine what it’s like.”

I hear this a lot when I try to explain what homelessness feels like. Try as I may, the listener often shakes their head afterwards, only to say, “I can’t imagine what that must be like.”

Yet I can. And I’m certain any person who has lived outside for long enough can. I would think this is especially the case for those of us who have experienced homelessness in the crowded, fast-paced and often inhumane atmosphere of the San Francisco Bay Area. Living outside is challenging enough on its own, without having the added pressure of a society that regards you as some kind of scum bag for having landed in such a spot.

But here I am out in the boonies. It doesn’t look too hard to grab a sleeping bag and camp out in the wilds. I might get a little flack, but it’d be nothing compared to flying a sign on a Berkeley city sidewalk.  So, whenever I think about leaving my apartment, and I examine my options, I include “homelessness” among the options. If I see five possibilities, I add a sixth — “homelessness” — because homelessness, in my experience, is superior to some of the indoor living situations I have had to pay for.

People who have not been homeless generally don’t do things like this. They consider their options, and while they may not be happy with all of them, it doesn’t cross their mind that “homelessness” might actually be better than some of them!

And yet, it crosses my mind. I wager it would cross the minds of many recovering homeless people. There is after all a certain appeal to not having to pay rent.

That fact alone — that I would count homelessness a viable option to indoor living — seems to separate me psychologically from those who have not spent substantial chunks of time outside. I may not actually be homeless now, but I could be very soon.  So in a way, I still accept “homelessness” as an ongoing part of my identity. It is a part of me — a part that never quite leaves me, no matter how long I have managed to stay inside.

This brings to mind the psychological phenomenon called the Imposter Syndrome. Wikipedia describes the syndrome as follows (italics mine).

“People who struggle with Imposter Syndrome believe they are undeserving of their achievements and the high esteem in which they are, in fact, generally held. They feel that they aren’t as competent or intelligent as others may think — and that soon enough, people will discover the truth about them.  Those with imposter syndrome are often well accomplished; they may hold high office or have numerous academic degrees.”

How often have I felt like this legitimately?  That is, when I actually was homeless?

I wrote earlier about how I would be in a conversation with someone in McDonald’s, reading a newspaper and talking about the ball game, and yet fearing all the while that this person would “find me out”  — that they would discover I was “one of them” — a homeless person.

I feared the inevitable moment when this would happen. A buddy of mine would enter and start talking “homeless talk” with me. At that moment, the enjoyment of the nice conversation about the ball game would soon be replaced with yet another depressing conversation about homelessness, Suddenly, I would be faced yet again with the undying discussion about how I might be helped — if I could be helped — and about what I must have done wrong in the first place to have gotten myself into such a sorry predicament. (Frankly, I preferred talking about the ball game.)

But I am no longer in that McDonald’s. There, at the corner of University and Shattuck, the sense that I would be “found out” was real. I was intentionally doing my best to conceal the fact that I was homeless, because I was tired of talking about it.  Nowadays this is no longer the case — and yet that feeling — that I am about to be “found out” — remains.

I will always identify with the situation of being outside and being looked upon by those who are inside.  That is the strange dynamic that for many of us makes homelessness such a bizarre and indescribable way of being. I will never cease to identify with those who live in that world. Whether I myself live there at present is in a way immaterial.  In no way does it reduce the strength of that common bond.

In a way, I will always be homeless. In a way, I am homeless no more.

edeninbabylon.com
Previous YWCA Spokane Announces Stand Against Racism 2022
Next What is a Soulmate?