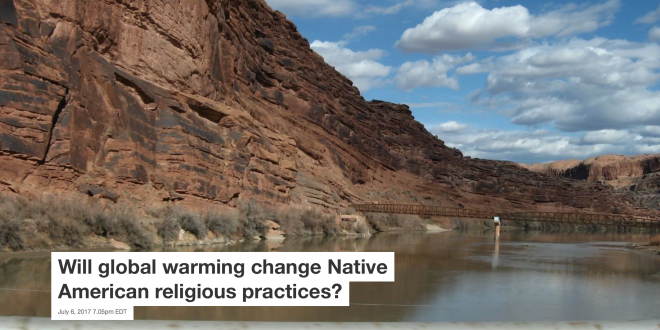 What does the shrinking of the Colorado River mean for Native American religions? Ken Lund, CC BY-SA

The Colorado River, one of the longest rivers in the United States, is gradually shrinking. This is partly a result of overuse by municipalities and seasonal drought. The other reason is global warming.

The decline in the river reservoir will have serious implications for large U.S. cities, such as Los Angeles, that depend on the Colorado River as their water source. In addition, this will also have an impact on the Native American tribes who view the Colorado River as sacred to their religions.

As Ka-Voka Jackson, a member of the Hualapai tribe and a graduate student working to address climate change on the Colorado River and restoring native plant species along its banks, stated,

“The Colorado River is so sacred not just to my tribe, but to so many others.”

As a scholar of Native American religions and the environment, I understand how indigenous people’s religions and sacred places are closely tied to their landscape. For the past 100 years, indigenous peoples have been forced to adapt to changes in their environments and modify their religious rituals in the United States. The U.S. government made certain Native American religious practices illegal in the 19th and early 20th century. Although these policies have since been rescinded, they led to changes in many indigenous practices.

Global warming, however, is different. The question is whether indigenous people will be able to adapt their beliefs all over again due to the impact of global warming on the natural world.

The Blackfeet tribe in Montana brought changes in their relationship with the natural world as a result of the policies of the U.S. government from the 1880s to the 1930s.

The Blackfeet moved their annual O’kan, or sundance festival, from late summer (usually held at the end of August) to the Fourth of July celebration. They avoided U.S. government punishment by masking their ceremonies within state-sanctioned public events.

Policies related to the mining of natural resources and damming of rivers on indigenous lands have also led to changes in Native Americans’ religious practices.

Historian David R. M. Beck interviewed elders and researched how the Menominee tribe in Wisconsin adapted to the loss of their sacred fish, the sturgeon, after a paper mill built a dam across the Wolf River.

The sturgeon disappeared after the dam was built in 1892, because they could no longer swim upstream to spawn. For over 100 years, the Menominee tribal members continued to pray and conduct their annual “returning of the sturgeon” ceremony in the spring – even though there were no more sturgeon in the river. The Menominee ultimately won the right to return the sturgeon to the Wolf River in 1992 and the tribe revitalized the full ceremony and celebration of their sacred fish.

In all these situations, Native American tribes learned to adapt to the challenges placed before them, modify their religious practice and embrace a different relationship with the natural world.

When it comes to global climate change, it affects everyone, not just specific groups in specific places. But for many indigenous peoples, natural resources are closely linked to religious beliefs and practices.

Historically, indigenous peoples used the natural seasonal cycles of weather, plants and animals as part of their liturgical or religious calendar. The Blackfeet held their annual “beaver bundle ceremony” in the early spring as ice melted off rivers and beavers returned to the open waters. In Blackfeet mythology, a beaver served as a deity who taught humans how to cultivate tobacco, which the tribe used for important religious ceremonies and as a peace offering to their enemies.

There are signs, though, that beavers are now moving north due to global warming. Biologists are currently studying both beavers and the birch and alder shrubs
that beavers eat, as both move north into new regions. Scientists worry that as a keystone species, the movement of beavers will change the northern ecosystems as they cut off waterways and build beaver dams. And shrubs will change the local waterways that they grow by. This will affect local animal species.

What will happen when there are no more beaver in Blackfeet territory? Will their religious traditions adapt similar to the Menominee when they faced the loss of their sacred sturgeon?

From the arctic tundra to the American desert southwest, and places worldwide, indigenous peoples will be facing the impact of global climate change.

Regarding the shrinking of the Colorado River, researchers Brad Udall and Jonathan Overpeck have concluded that, “Failing to act on climate change means accepting the very high risk that the Colorado River basin will continue to dry up into the future.”

If this river faces a drier future, it will likely affect the Mojave, a people indigenous to the Colorado River basin, who believe the river was created by their ancient deity Mastamho as part of their sacred landscape.

As the G-20 convenes in Germany this week to discuss global issues including climate change, indigenous scholars, such as myself, are wondering what the future holds for indigenous peoples, their environments and their religions.

Indigenous communities can be resilient and adapt their internal religious beliefs to outside challenges, as Native American tribes from the turn of the 20th century have proven. Climate change presents yet another challenge.

Previous Charlie Gard’s parents end legal fight to take him to U.S. for treatment
Next Ask an Eastern Orthodox Christian: How do you change an evil heart?