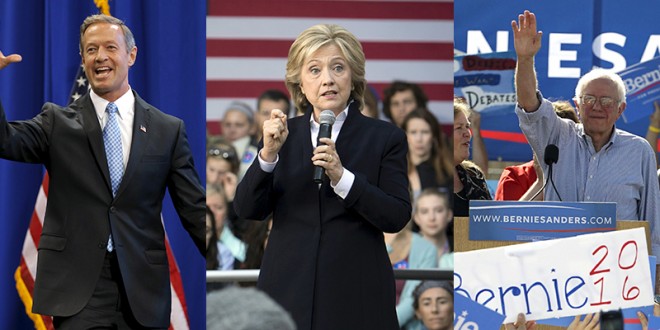 Will Democrats play the God card at their debate?

(RNS) Democratic contenders in the 2016 presidential election take their turn at the debate lecterns Tuesday  (Oct. 13), and it’s anyone’s guess if it will be a battle of contesting moral visions or a policy snooze-fest.

As a group, the Democrats are much less likely than the GOP contenders –- a collection of often-vocal Christians — to cite God as they pass the political ammunition.

Even so, religion may pop up in this Democratic debate, too.

Here are links to RNS’ 5 Faith Facts series updated from the campaign trail. We’re listing them in CNN’s order of highest polling numbers.

She has outraged conservative evangelicals with her views supporting gay marriage and reproductive rights for women. Yet every vote Clinton made as a former U.S. Senator, she said, was “a moral responsibility.” Her daily habit, she said, is praying, “for discernment, for wisdom, for strength, for courage … ”

Most recently, she stood up to Ben Carson’s Muslim bashing and defended herself against claims that her 2012 campaign staff whispered that President Obama was a foreign-born secret Muslim.

Born to Jewish parents, Sanders is a cultural Jew who says he’s not a religious person. He scored a solid zero from Ralph Reed’s Faith and Freedom Coalition in its most recent scorecard and a 100 from the abortion rights group NARAL Pro-Choice America.

Nonetheless, he campaigned at the evangelical Liberty University, telling a student convocation he is motivated by the same vision found in all great religions and “so beautifully and clearly stated in Matthew 7:12: ‘do unto others as you would have them do unto you’. That is the golden rule … It is not very complicated.”

He’s a pray-every-morning Catholic who often angers religious conservatives with his socially liberal views. O’Malley is in favor of abortion rights and embryonic stem cell research. His website boasts he led the push to legalize same-sex marriage in Maryland.

In an essay for the National Catholic Reporter the day before Pope Francis’ first U.S. visit, O’Malley aligned himself with the pontiff’s moral charge to all people to work for immigration reform and to battle income inequality.

On the day he announced his candidacy, Webb said, “outside of my faith and my family, my greatest love will always be for this amazing country…”

Still, that faith is not talked about. The decorated Marine veteran and former Secretary of the Navy is more apt to refer to himself as a “warrior” than as a Protestant. His views run the spectrum from left (supporting abortion rights) to right (OK with prayer in schools).

Chafee is mostly mum about religion, God, prayer or his own personal faith. In action, he’s aligned with the liberal social views (for abortion rights and marriage equality) of the Episcopal Church.

He often rubs conservative Christians the wrong way. As governor he declared May 1, usually the National Day of Prayer, Rhode Island’s “Day of Reason.”  And he called the evergreen in the room a “holiday tree” instead of a Christmas tree. To this day, he says, he never understood the brouhaha over that.

Harvard professor Lawrence Lessig is unhappy that CNN left him off. RNS found that he’s resolutely silent on any religious ties. However, Lessig has a moral passion for an open Internet and free culture (he’s a co-founder of Creative Commons) and for reining in the flood of money he says corrupts the political process.

A social justice liberal, Biden is so very Catholic he took every opportunity to appear next to Pope Francis during the pontiff’s U.S. visit. Still, Biden repeatedly says he wouldn’t impose Catholic doctrine (on marriage and sexuality issues) on a pluralist nation.

Just in case Biden decides to enter the race,  CNN says it has a podium waiting for him.

Previous Violence and a Country of Denial
Next Ask A Jew: What is a mezuzah?