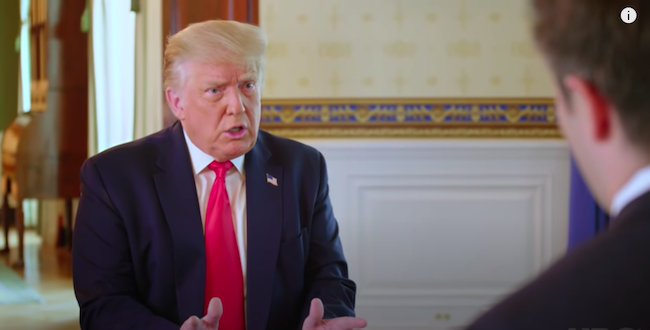 Screenshot of interview with Donald Trump and Jonathan Swan

Will 82% of Evangelicals Really Vote for Trump? I Hope Not, Here’s Why

Will 82% of Evangelicals Really Vote for Trump? I Hope Not, Here’s Why

Recently I ran across a statistic claiming that 82 percent of Evangelical Christians will be voting for the reelection of Donald Trump. I wonder many things.

Is this actually accurate? And who qualifies as an “evangelical?” I frankly find it difficult to believe that 82 percent of my brothers and sisters in Christ have fallen for the flagrant lies of a lifelong con artist.

On the other hand, Donald Trump has made a living — a killing would be a better word — out of being a confidence man. I wouldn’t be surprised if he’s conned a lot of his followers, by successfully making himself out to be exactly what they want him to be. And though I hate to say it, I wouldn’t be surprised if he’s conned more than a few Bible-believing Christians along the way.

However, I’ve also met more than one Trump-supporting believer who has told me that they are well aware of the defects in Mr. Trump’s character.  They say that it’s “not about personal character” but rather “about the issues.” In other words, because Trump is pro-life and favors many other policies that appeal to many Christians, his moral character is overlooked.

I take exception to this view on at least two grounds.

First, I believe that it is about character. Even a cursory study of the Kings of ancient Israel will reveal that there were those “who did evil in the sight of the Lord” and those who did not. The ones who did good in His sight were blessed, and the ones who did evil were punished for it. I do not see any distinction made between the righteousness, or lack of it, in their personal lives and in the way they conducted affairs of the State.

Now, I have heard a retort to this that these rulers were oligarchs in an Old Testament day. But there are a couple problems with this. For one thing, God has not changed. His law is still absolute, whether  it be applied 3000 years ago, or today, or 3000 years in the future.  “It is easier for heaven and earth will pass away, than for one iota of the law to fail,” (Matthew 5:18). So whether it was an Old Testament oligarchy or not is irrelevant.

Another issue I have with this is that Donald Trump is doing everything he can to behave as an oligarch. He has disrespected the judicial system in our three-part system of checks and balances, and has even made sounds like he wants to do away with the judges. He routinely sanctions those who disagree with him, while holding under threat of punishment those who still agree. Virtually everyone who has spoken against him, whether they lean to the Left like Nancy Pelosi, or to the Right like Mitt Romney, is regarded as an “enemy of the State,” as though Trump himself is the State.  These are classic characteristics not only of oligarchal monarchs, but of despots and tyrants throughout history.

In a Tennessean story dated Jan. 2, psychologist Barbara Sanders writes: “I believe that our government is an oligarchy — a small group of people having control of a country, organization or institution. Money talks and usually, the more money, the greater the vote.”

The huge increase of money emerging from the billionaires in Trump’s inner circle has grossly increased the extent to which our government is no longer a democracy nor even a republic – but an oligarchy.

So to differentiate God’s judgments on the basis either of that being “Old Testament” or on the basis of our not being an oligarchy is to miss the mark. One cannot claim that God was only concerned about the character of kings in ancient times.  God is concerned with all of our characters – yesterday, today, and forever.

Another problem I have with those who point to the many good things they believe that our President has done for Christendom, while overlooking his character, is simply this. If we can’t come up with somebody who promotes Christian values in our highest office who is better than Donald Trump, then we sure aren’t looking very hard. Lots of other people hold these same or very similar values, without having to burden us with the egregious behavior of a Donald Trump.

His behavior, by the way, is egregious. I wouldn’t think I should have to support this! Reformed theologian John Piper writes, “Donald Trump with his divisive rhetorical style and his adolescent pattern of blaming and his reckless Twitter form of leadership–add to this that a huge percentage of white evangelicals voted for him even though the character issues were screaming to be taken more seriously and given a higher priority.”

This leads me to what I believe is the worst effect that the corrupt character of Donald Trump has had on our nation. In no way is this man providing a positive role model for the young people of today. His juvenile self-centeredness, even to the point of refusing to wear a mask because he “doesn’t want to give the press that satisfaction” is modeled in the behavior of his younger followers. Anti-maskers seem only concerned about their personal comfort and “rights,” while overlooking the fact that the reason one wears a mask is not to protect oneself from the virus, but to protect others, in the event that the person wearing the mask might be an asymptomatic carrier.

And where does such a shallow understanding of human rights belong?   Quite frankly, in Satanism. In the works of dark teachers such as Alastair Crowley, who proclaimed: “And the whole of the law shall be do what thou wilt.”

That is not the concept of inalienable human rights upon which this great country was founded. The opening lines of the Wiccan Rede come closer to representing what our Constitution truly says: “An it harm none, do what thout wilt.” Add to this an even higher value, that is to say, the Golden Rule, and I ask you: Has Donald Trump done to others what he would have them do unto him?

Ronald Reagan is a perfect example of a President who supported many of the Christian values that Trump appears to support. Reagan was not perfect either. But he had a quality that Trump lacks. It’s called character. It’s called integrity. And whatever anyone may think about Reagan, he was able to pull the country together.

Now I ask you, whoever you are who believes in Jesus Christ as Lord and Savior and who reads the Bible as the sole and infallible authority espousing God’s Word – has Donald Trump pulled this country together?

Not at all. In the words of former Secretary of Defense James Mattis: “Donald Trump is the first president in my lifetime who does not try to unite the American people—does not even pretend to try. Instead he tries to divide us.“

Whoever has eyes to see, please see that Donald Trump is engaged in a purposeful effort to tear our country apart. “Divide and conquer” is the technique used by despotic authoritarians throughout time. He may blame the current cultural division on Obama, but the division in America is much wider now that Trump is in office.  Moreover, he has increased that division intentionally – for a reason.

The more division exists between disparate social groups in our society, the more we will focus on that division. To increase focus on racial tension in America serves the handy purpose of diverting public attention away from the true division that Trump seeks to conceal. That is the division between the super rich – the billionaires who have taken control of our country – and the ever increasing contingent of American citizens whose poverty has become so severe as to render them immobilized.

The Trump administration has an agenda, and that is to oppress the American people to the point of socio-economic paralysis. Such is the perfect set of conditions for the rise of a new dictatorship. While Trump may claim that the Biden-Harris ticket will “put an end to democracy as we know it,” it is actually Trump himself who is aggressively seeking to terminate that democracy.  It is Trump who is seeking “12 more years” as a ruling monarch in a despotic oligarchy – not Joe Biden, who actually is seeking to revive and restore the remnants of our democracy, before it is too late.

Think about it. Do Biden supporters chant “12 more years” at his rallies?  Whatever one may think of Joe Biden, it cannot be denied that he is attempting to uphold our democratic system, not replace it with something else.

Others have made statements such as, “I believe that it is about character, but don’t you know that Donald has accepted Christ? I heard him talk about his conversion experience, and it was beautiful.”

Four years ago, Christian author James Dobson was quoted on Focus on the Family as saying: “Donald Trump has accepted Christ. He is now a baby Christian, and we must pray for him.”

Four years ago? In the past four years, has anyone seen the fruits of character transformation that ordinarily follow a Christian conversion?    Jesus said:,”Ye shall know them by their fruits.”

I dared post that marvelous Scripture on a controversial thread a while back, and was greeted with a lengthy retort citing the so-called “fruits” of Donald Trump.  Not one of those fruits had anything to do with his character, but with adherence to certain precepts that thousands of other Republicans would also uphold – and thousands of these other Republicans might possess one thing that Trump does not – and that is character.

I adjure you, if you are a Bible-believing follower of Jesus Christ, and you are at all wavering as to who to vote for tomorrow at the polls, please reconsider before you make the mistake of casting your vote for Donald Trump.

I am not saying that the Left is right. I am saying, as conservative thinker William F. Buckley said before me, that our failure to maintain a properly conservative republic has created a leftist backlash – to which the historical response has been fascism.  Please do not let this fascist take over our great country.  For Donald Trump has not made America truly great again.  He has made us a shameful laughingstock among all nations of the world.

And perhaps this is what his buddy Vladimir wanted all along. Con men, after all, are easily conned. Are you?

Previous In the Days Before the Presidential Election, Some Spokane Ministers Encourage Crossing the Line Between Faith and Politics
Next Voting a way to “Out of Many, One”