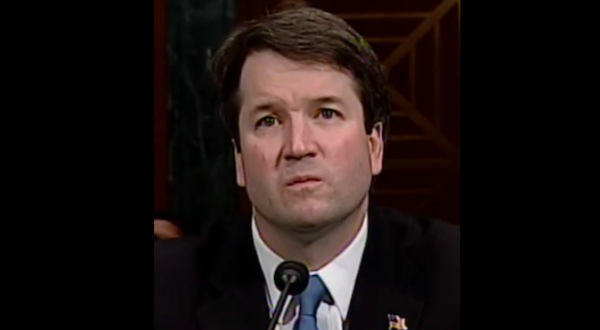 Kavanaugh at his confirmation hearing in 2004 - CSPAN photo on Wikipedia

A preliminary scroll through Twitter’s #WhyIDidntReport feed reveals a telling pattern. Most of these testimonies report a power dynamic in which the victim was abused by someone with more social or economic power than them. Sometimes, it was another student who was more popular than they were. Sometimes it was a parent figure they should have been able to trust. Sometimes it was a work supervisor with the ability to blackmail them into silence.

After surviving this kind of horrible power abuse, victims often continue to be subject to power abuse from the authority figures whose job it is to protect. Twitter users report having told teachers, counselors, and even police officers who ignored them, belittled them, blamed them, or even threatened to punish them for their audacity to speak up.

Hundreds of experiences like this over time have led victims to avoid reporting in the first place, afraid of receiving the same responses that others have received. One testimony describes watching Bill Cosby’s accusers “getting torn apart and traumatised by his defence (sic).” This individual “weighed up the pain and trauma of the assault with the pain and trauma of going to court with a lawyer pulling apart every aspect of my sex life to justify why I deserved it,” and decided that it was less painful not to report.

Our justice system is supposed to protect those who have been victimized and hurt, yet it is compounding the hurt that has already been done. And, in some ways, this isn’t very surprising. How can we expect sexual assault trials to be conducted fairly, thoroughly, and compassionately when the highest court in our nation is treating serious allegations as nothing more than an inconvenience to their process? The Supreme Court is supposed to uphold justice, to defend the defenseless, to set a precedent for other courts in how to rule fairly. Allegations of sexual assault against a potential Supreme Court Justice need to be taken seriously because, should he be inducted into the Court, Brett Kavanaugh will have major responsibilities in determining the rights of people across our nation. If he has demonstrated in his past an inability to respect individuals’ rights in personal settings, how can we trust him to uphold individuals’ rights on a major scale?

There are arguments that these allegations happened long ago, are no longer relevant because Kavanaugh has grown. He was a young man then, people say, he can’t be punished forever for something he did one time. Yet, victims of sexual assault are punished for something someone else did to them for the rest of their lives. The #WhyIDidntReport movement has demonstrated clearly that the emotional, psychological, and sexual wounds that assault inflicts can last decades, and perhaps never be fully healed. To hold perpetrators accountable and appoint Justices who live up to their title is the absolute least we as a society can do.