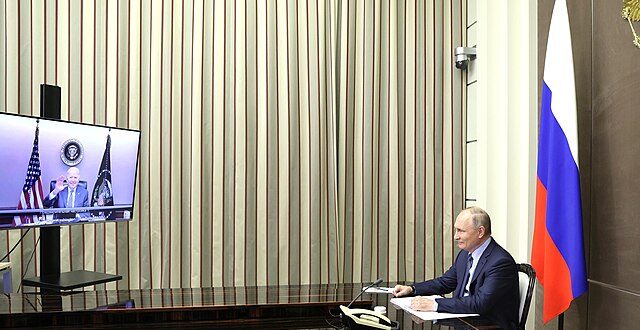 Why We Need To Start Paying Attention To The Ukrainian Crisis  

Why We Need To Start Paying Attention To The Ukrainian Crisis

Like most Americans, you are probably not paying much attention to the unfolding Ukrainian crisis. Or maybe like me, you have been avoiding the news.

But it is time for all of us to pay attention. As Russia prepares to mount the largest invasion Europe has seen since World War II, Americans must face the reality that, at best, we could see a return to dangerous Cold War conditions. At worst we will be drawn into a devastating Ukrainian ground war.

Of course, that is not the worst. In recent days Russia has publicly exercised its nuclear muscles, reminding the world it still has the capacity to destroy us all. Nuclear brinksmanship is back on the table.

Events are unfolding rapidly. As I write this, Russian troops could cross into Ukraine at any moment. The New York Times provides a running update.

As much as I have traveled through the years, no one would describe me as an adventurer. My 2005 trip to Ukraine would be the exception.

As editor of The Spokesman-Review, I participated in an exchange program with a Ukrainian newspaper. The sponsoring organization, IREX, was financed by international nonprofits and supported by the U.S. State Department.

The partner newspaper was in Kherson, a regional capital in southern Ukraine, a major port city on the Dnieper River leading to the Black Sea. There was a time when Kherson was one of the most important military shipbuilding and naval seaports in the old Soviet Union. But by 2005, following the Soviet collapse, it had fallen into disrepair.

The newspaper, Novyy Den, asked us to send a senior editor and a digital web specialist to Kherson for two weeks to run training programs and educate the staff on American news practices and values. A few months later, several of their journalists visited Spokane.

I desperately wanted to make this trip. My grandfather had roots in Ukraine when it was a part of Russia. We apparently had distant relatives still living in the area up to the genocidal German occupation in World War II.

Getting to Ukraine was not easy; 24 hours from New York to Kyiv. Then it was an overnight train ride to Kherson, the airport there having been destroyed sometime after Ukrainian independence in 1991.

Kherson seemed of another time. The train station was dilapidated. The streets broken and nearly impassable in places. An army of babushkas could be seen sweeping streets and sidewalks. There was a downtown, modern only in the way of old Soviet cities with cookie-cutter, blockhouse-style buildings, gray and uninviting. Many seemed abandoned. The newspaper office was in an old Soviet-built block building that was being remodeled, a project that had been ongoing for years but without much progress. The offices were clean and modern enough. But the communal toilet was of the Turkish style, essentially a hole in the floor located in a hallway behind a paperboard partition.

Our Ukrainian hosts were ethnic Russians. Two of the newspaper’s editors were Russian army veterans who had fought in Afghanistan during the decade-long Soviet-Afghan war that began in 1979. They were astonished that the United States had not learned from them the futility of war in that ungovernable country.

Following the Soviet collapse, Ukraine and other Eastern European countries, all former Soviet satellites, gravitated toward the West. NATO was eager to embrace that move and welcomed Ukrainian overtures.

To Russian leaders, the possibility that Ukraine might join NATO was perceived as an existential threat. Ukraine had long served as a strategic buffer, separating Russia from its enemies, particularly the Germans.

Even as political turmoil, marked by the 2004 Orange revolution, disrupted Ukrainian leadership and governance, Russia began efforts to neutralize the perceived threat. Russia annexed the Crimea in southern Ukraine, an action condemned by the international community. Ethnic Russians, with military support from the mother country, initiated a civil war in eastern Ukraine on the border with Russia and its satellite, Belarus. Fighting has been constant, though the world has paid little attention.

In the ongoing conflict between Russia and Ukraine my Kherson hosts largely sympathized with Russia. At the same time, growing out of Kyiv, a Ukrainian nationalist fervor has developed, especially embraced by young people.

Now, thinking he might be able to solve his Ukrainian problem entirely, Russian President Vladimir Putin is perhaps hours away from a devastating blitzkrieg.

It Will Get Ugly

It will be a messy business. The Russian military has overwhelming superiority so can make quick work of Ukrainian forces. But there will be guerrilla resistance. Thousands on both sides will be killed and experts predict the resulting refugee crisis will be the worst in Europe since the end of World War II.

And what of the West?

Ukraine is not a NATO member. There is no mutual defense treaty with the U.S. or European allies. We have supplied and will continue to supply military equipment and will help mobilize civilian relief. But there is almost no chance we will go to war with Russia in Ukraine.

Our response will be the harshest economic and diplomatic sanctions ever imposed on Russia. It is likely the West will halt construction of a European oil and natural gas pipeline vital to Russian economic interests. Bank assets will be frozen. Russian diplomats will be expelled.

The Russian economy will take a devastating hit. But Putin has shown he will sacrifice his economy for perceived strategic gain. Ukraine is that important to him.

Americans will also feel economic pain. Oil and natural gas prices will increase, for one thing.

And a new, tense and economically damaging cold war will begin if it has not already.

There are more than one million Ukrainian ex-pats in the United States. They make up one of the largest ethnic minorities in Spokane.

For them, this crisis is deeply personal as they worry about the fate of loved ones in the home country.

In my two weeks in Ukraine, I found all the people, ethnic Russians and nationalist Ukrainians, to be warm and gracious. We ate fine food, drank lots of Vodka, and talked about everything but politics.

Kherson has been rebuilt since my trip and is again an important economic center.

It tears at my heart that such a beautiful country and such a gracious people must face a man-made disaster that now seems inevitable.

It is time to start paying attention.