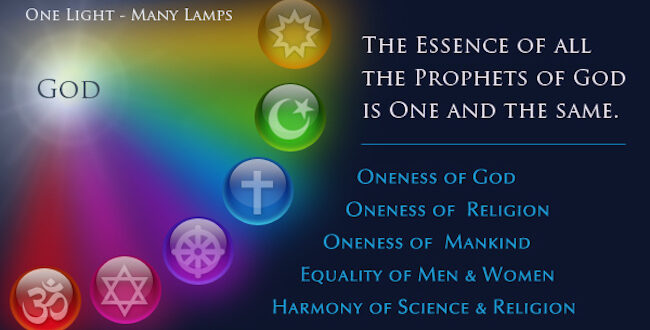 Original creator of this graphic is unknown

Assume God: an unknowable essence, creator of a universe that functions beyond time and space as we understand them. Such assumption underlies fundamental beliefs of most religions. We humans can never fully embrace, nor even understand, the essence of God. He is incomprehensible. But a universal point of agreement is that God is one.

This assumption suggests that there is only one religion. Yet religions differ across time, space, and cultures. Why would God — all-knowing, all-loving — create what has evolved into countless divisions sharing many common beliefs, yet disagreeing, even fighting, over others? If all religions derive from the same source, this unknowable God, they are essentially one.

Throughout millennia, religions have arisen in different places and at different times, under the guidance of inspired humans. Baha’is call these individuals “manifestations of God.” Historically their original teachings were disseminated by eyewitness accounts of what a manifestation said or did. Generations of followers shared these oral traditions, embellishing and reinterpreting them as time passed. When they were eventually transcribed into “scripture,” literally “writing,” these stories had been altered in the telling. Once written, they were translated and re-translated into multiple languages by followers of what became different branches.

Theological questions about religious unity are common. Search engines provide a rich array of results for “oneness of religion.” One returns a Baha’i website. But these questions preceded the internet.

Scientific and philosophical ideas of the 18th century Enlightenment generated many questions about God and society, often leading to religious and political revolutions. These questions generated a 19th century worldwide movement of evangelical fervor and expectation, often seeking Protestant unity It was the “birth of a liberal and socially aware version of Christianity uniting Enlightenment values with American activism.” In the United States, new churches arose: Shakers, Latter-Day Saints, Millerites, Adventists, Christian Scientists, and others. From Germany, a group of Templars settled at the foot of Mt. Carmel in Haifa, Israel, with a millennial expectation expressed by “Der Herr ist nahe” — “The Lord is nigh.” Similar movements were reported in India.

In Persia, a religious scholar named Mullah Husayn sought the Promised One of Shia Islam. His search ended on the evening of May 23, 1844, when a young merchant of Shiraz invited him to visit. There the host revealed he was that Promised One, the Bab (Gate), who was to usher in the fulfillment of all religious teachings. Today that movement is known as the Baha’i Faith.

That same day, halfway around the world, from the Capitol in Washington, D.C., to a railroad depot in Baltimore, Samuel Morse typed history’s first telegraph message, from Numbers 23:23: “What hath God wrought?”

Implications of that message, both technologically and spiritually, are many. Technology is neutral, whether telegraph or nuclear energy. How that technology is applied is a matter of ethical, perhaps spiritual, choice. The aftermath of nuclear weapons dropped on Hiroshima and Nagasaki has been clearly documented. No one involved with those weapons imagined their full effects. Today’s technology could have captured those effects in slow motion; we could have watched.

One planet, one people, please

Technology now allows us to communicate to Mars and beyond. It allows us to track changes in climate, pollution, pandemics, and troop movements. Scientists, theologians, entrepreneurs, statesmen, philanthropists, and, best of all, young people recognize our global interdependencies. We can choose to use our technologies to better the human condition – or not. The only deterrent to misuse of our vast technology is our own collective conscience, the outward manifestation of our inward spiritual ethos.

Wisdom from the ages, guidance from many manifestations of God – religion — has survived. We can choose to integrate and embrace that wisdom, to recognize the essential oneness of God’s guidance. Or we can continue exploiting the natural resources of our planet to kill each other, directly or indirectly.

Our course is clear.

“The diverse communions of the earth,” Baha’u’llah warned, “and the manifold systems of religious belief, should never be allowed to foster the feelings of animosity among men.” These “principles and laws, these firmly-established and mighty systems,” he wrote, “have proceeded from one Source, and are rays of one light. That they differ from one another is to be attributed to the varying requirements of the ages in which they were promulgated.” Further, “the doors of love and unity have been unlocked and flung open to the face of men… Consort with the followers of all religions in a spirit of friendliness and fellowship.”

The reason? As ‘Abdu’l-Baha, Baha’u’llah’s son and appointed successor, explained, “the essential foundations of the divine religions are unity and love.”

Previous Some Baptist pastors are calling Kamala Harris ‘Jezebel.’ What do they mean?
Next We Are Broken