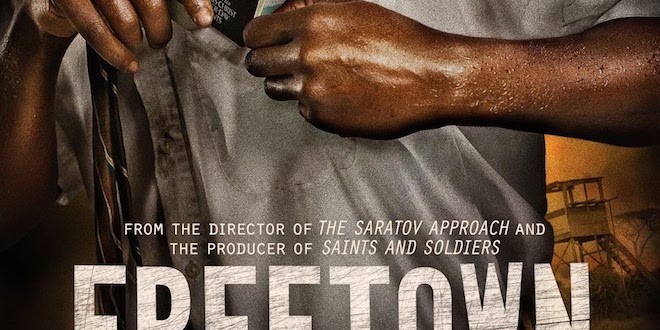 Why people of all faiths should go see Freetown

Liberia, 1989. Fighting between the corrupt government and rebels has plunged the country into turmoil, with members of the ruling Krahn tribe particularly targeted for extinction by the rebels. Missionary work has ground to a halt in the atmosphere of danger and fear. The new film Freetown, which opened yesterday, follows the journey of the local congregation’s leader tasked with getting six Liberian LDS missionaries from war-torn Liberia to safety across the border in Freetown, Sierra Leone.

From the first scenes of the movie, thematic juxtapositions enhance each other. In the tense opening scene, an old red car is stuck in the mud. The driver is threatened by rebels, little more than children, with guns. He offers them water and assures them he’s not Krahn, and eventually they allow him to pass. The next scene shows the driver’s destination: a happy and peaceful gathering of dozens of Latter-day Saints at a baptism. In fact, the scriptural reference on the back window of the little red beater sets this contradictory from the beginning: “Lord, I believe. Help thou mine unbelief” (Mark 9:24).

These coexistent juxtapositions – of faith and doubt, hate and love, fear and courage, violence and peace — continue through the film as a delicate balancing act. The doubt, hate, fear, and violence don’t disappear. They are constantly there, gnawing at the faith, love, courage, and peace that exist, reminding both the characters and viewers that there is opposition in all things and providing the impetus to keep moving, to see the journey through to the end.

We might not have all the answers, or see the path clearly, but that’s no reason to stop trying. “Revelation doesn’t come when we hide in the shadows or are sitting on the ground asking for it. It doesn’t come that way, it comes when we are working.”

Movies set against violent events like civil wars can be bloody and gory, but Garrett Batty (the director and co-screenwriter, who also directed The Saratov Approach) ratchets up the drama while managing to keep the violence almost entirely off screen. And there are moments of levity to lighten the darkness. For example, some of the tensest moments occur when the group comes upon rebel checkpoints. Each time, I found myself holding my breath while the rebels circled the car, determining whether or not to let them through. At the first such stop, there was complete silence as the car’s occupants tried not to provoke the rebels. Then one of the missionaries, Elder Nyanforh, looks up and starts talking: “We have a message for you…we are missionaries for the Church of Jesus Christ of Latter-day Saints…” He launches into a standard missionary script! The guards quickly wave the car on, eager to be rid of this unwelcome proselytizing, and Elder Nyanforh grins at his companions. “What? We’re supposed to open our mouths!” he exclaims as they drive off.

Filmed on location in Ghana, the film displays beautiful shots of the African countryside and a haunting and riveting soundtrack that augment this based-on-a-actual-events story. Freetown delivers a powerful and ultimately uplifting message for viewers, regardless of religious beliefs, that faith can endure in the most difficult circumstances.