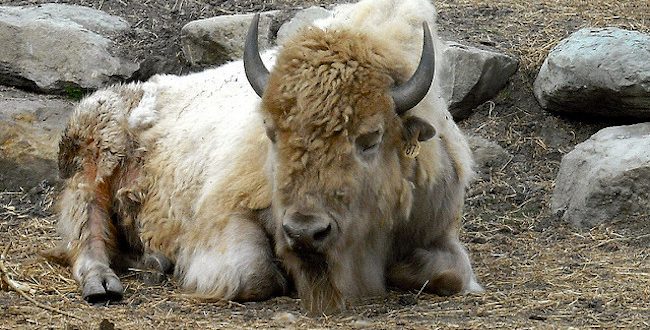 Why killing white buffalo has to end

Every religion and spirituality have symbols that represent faith and beliefs that are considered sacred and carry significance.  For Christians it is the crucifix and image of Jesus Christ, but for some Native American tribes it is the white buffalo, and some of these buffalo are being sold to trophy hunters.

At places like Ox Ranch in Uvalde, Texas, which has an estimated 15 buffalo out of the 50 that currently exist in the U.S., trophy hunters can pay $18,500 to kill a white buffalo.  Their website even acknowledges the sacredness the buffalo is to Native tribes and it is a “sign of spiritual rebirth and better times ahead.”

Trophy hunting this buffalo has to come to an end because of how rare and sacred this animal is to Native tribes, such as the Lakota.

“They say before even Jesus was born, the White Buffalo Calf Woman came to our people during a time of hardship,” he said.

During this time of hardship, Nunpa said that game was scarce and people were hungry, so two hunters went scouting for food and game.  When they were going up a hill, off in the distance they saw an object gradually coming towards them and soon recognized it as a woman in a buckskin dress.

“At that time, one of the warriors had bad thoughts and the woman told the warrior to come close,” Nunpa said. “When he did a cloud enveloped him, there was lightning and thunder, and when the clouds went away that warrior was laying on the ground full of maggots.”

As for the other warrior, who had pure thoughts, Nunpa said that the woman instructed him to go back to the village and prepare a lodge for her coming in the morning with a gift.  The next day, when she came, she entered lodge with the chiefs and brought the sacred pipe to the people and gave the people instructions on how to take care of the pipe.

As the woman left the village, Nunpa said that she first turned into a black buffalo, then red and yellow before becoming a white buffalo.

“She did tell the people that she would return in times of hardships, so when our people were having any type of hardship that you notice that every once in awhile there’d be a white buffalo calf born,” Nunpa said. “So, this is the Lakota spiritual connection to the buffalo and that’s why it is sacred to us.”

Another story about the significance of the white buffalo, he said, is about a cave in the Great Plains where a white buffalo came out of it and a herd of buffalo followed behind it, providing people with food and game.

Other than these stories, Nunpa said that sacred sites such as ones in the Black Hills are shaped like a buffalo and that in Lakota astronomy the buffalo is significant.

He said that killing a white buffalo is the same committing sacrilege among Christians and killing an important part of spirituality in a tribal nation’s story.

“The white buffalo is a sacred relative to the Lakota people,” Nunpa said. “To make it into a trophy is akin to stuffing Jesus and putting him on the wall.”

According to a page on Lakota Ranch, a Greenville speech and language therapy organization, the arrival of the white buffalo is similar to the second coming of Christ and would bring “purity of mind, body, and spirit and unify all nations.”

Because of the sacredness of this animal and how killing it is the same as committing sacrilege to Christians, hunting the buffalo needs to end and they have to be preserved.  The spirituality of the Native tribes is the spirituality of this country and respecting the values and beliefs of the tribes, is the respecting the values and beliefs of this country.

“America needs to listen to its Native Americans because they have a story to tell,” Nunpa said. “And if America would listen to us we can teach them our history and culture, our language so that they would understand us better.”

He added that it would create a better relationship between them.

By listening to the tribes and their stories, a better relationship between the tribes and Americans can develop and preserving the white buffalo can be a first step in mutual respect.