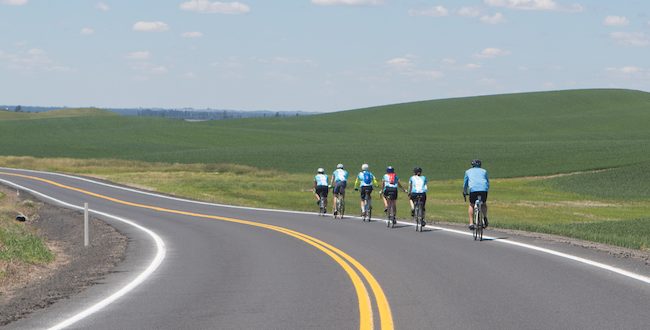 In 2018 cyclists road across the state for refugees/Contributed photo

Why I Ride For Refugees

“When Israel was a child, I loved him,” writes the prophet Hosea. “Out of Egypt I called my son.”

This Old Testament verse is inscribed on All Saints Cathedral, an Anglican church in Cairo that runs Refuge Egypt, a nonprofit ministry serving refugees who have fled violence in their North African homes. It opens Hosea 11, a monologue in which God, enraged by Israel’s infidelities, debates the appropriate punishment. Should God turn a deaf ear or seek outright retribution?

When I read this chapter, I envision God storming back and forth across Heaven, rattling the china in the cabinets on high and sending the heavenly hosts scurrying for the best cloud to hide behind. With each pass, God’s anger deepens as God remembers another way Israel, like a rebellious teenager, thumbed their nose at their Creator. God’s anger crests when, finally, it is overcome by God’s filial love.

“Yet it was I who taught Ephraim to walk,
who took them in my arms…
I fostered them like those
who raise an infant to their cheeks;
I bent down to feed them…

My heart is overwhelmed,

My pity is stirred.”

Suddenly, God remembers how much love God has for Israel, the world’s first refugee people, and God’s temper subsides.

A Ride for Refugees.

It was at Refuge Egypt, in the shadow of All Saints, where my heart was first overwhelmed, and my pity stirred by refugees. I cannot rationally explain why, but for the last 12 years, ever since visiting Refuge Egypt as an exchange student, accompanying refugees has been the boldest through-line of my life. I have studied our international refugee system, I have served refugees in multiple professional capacities, and I have volunteered with refugees by hosting them in my home, tutoring them in English, and most recently, offering driving lessons.

This week, I will raise funds for refugee resettlement and call attention to refugees’ stories by participating in World Relief’s Sea-Tri-Kan bike ride. With 47 other riders I will traverse 425 miles across Washington. Compared with I-90’s direct path, our route is circuitous. But our goal is not efficiency. Our itinerary takes us to each of the three offices of World Relief in Washington: Kent, Tri-Cities and Spokane.

World Relief is the only agency resettling refugees in Spokane. A network of churches led by a team of professionals meets refugees at the Spokane airport and guides them through their first five years of American life. I won’t spend a lot of time throwing out definitions, facts or figures about refugees. As a result of our recent national conversation, I think most people understand the basics. If you’re curious to learn more about World Relief, refugees or statistics, these are some great websites:

But here are some key points:

For nearly 40 years, our government enjoyed widespread agreement that resettling refugees was an intrinsic good. Resettlement was so uncontroversial that for many years, most Americans weren’t aware of them.

In fact, so sure was their support that the strategy refugee advocates often adopted was to stay quiet. In 2013, I interned for World Relief peer group USCRI during the height of the latest push for comprehensive immigration reform. Congress included refugee advocates’ provisions from the start, and their strategy was not to say anything further.

The advocates’ calculus has shifted tectonically since the election of the current administration. The president has reneged on our nation’s commitment to refugee resettlement with swift and disgraceful abandon. Starting within a week of the inauguration, he has systematically crippled the capacity of America’s federally funded resettlement groups to offer freedom and new life to people who have fled the world’s worst tyrants.

As a longtime advocate for refugees, I never would have considered participating in this ride before the 2016 election. But like the God of Hosea, I once again found my heart overwhelmed, and my pity stirred. I felt responsible for shifting my accompaniment of refugees into another gear, so to speak.

A Hard Ride and Softened Hearts

As I take this ride over the next week, I invite you to share in my discoveries. The route will take us past the natural beauty of coastal rain forest, Cascadian vistas and Columbian plateau. It will bring us in contact with 47 other athletic advocates for World Relief. And my hope is that the experience will make us a channel to the world of the love God feels for Israel in Hosea 11.

The passage leaves unanswered the question of why God’s heart was so suddenly softened. I believe God remembered that Israel was the world’s first refugee people, bearers of unique suffering. As a refugee people Israel fell into each of those categories for which God has special love. Refugees are strangers. They are widows and orphans. They are the hungry, the thirsty, the naked, the homeless and the sick. And by definition, if they do not flee refugees risk becoming the dead.

God remembers that what distinguishes Israel is not their sin but their captivity. They act not out of malice toward God but out of desperation to be free. Hosea ends his prophecy with God’s promise:

“Out of Egypt they shall come trembling, like birds…
And I will resettle them in their homes.”

I ride for myself to better understand refugees’ unique suffering, what it means to travel far from home, how it feels to be captive to a journey whose end feels impossibly far away.

I ride for refugees so that we — World Relief, Christians and Americans — may continue to fulfill God’s promise to Israel for the 25 million refugees captive in the Egypts of today, the objects of God’s most special love, who yearn for freedom.

You can make a donation to World Relief through Ben’s ride at his fundraising page.