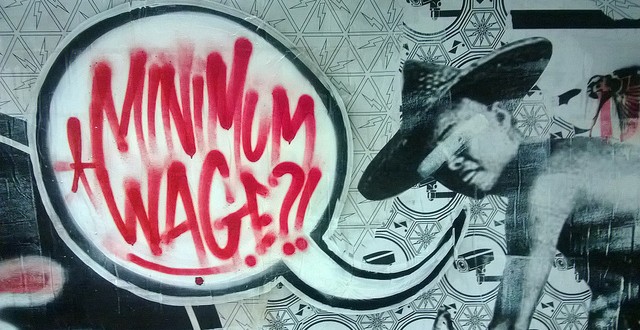 Why I oppose the $15 minimum wage

I may be dipping my toes into very turbulent waters, but, I am opposed to the $15 minimum wage that many protesters are advocating. I recognize that this may not be a popular position (especially as many who frequent spokanefavs.com seem to be rather progressive in nature).

When I graduated from college in 2007 and started my first job, I made $30,000 annually.  To break it down, I was making $14.42 per hour. Between an apartment with a roommate, insurance, student loan payments, insurance, gas, utilities, student loans, and a variety of other monthly bills, I was barely able to rub two pennies together at the end of the month.  It was hard!

Six years later, I completed my master’s degree and had all of those same bills (along with several others and a few more student loans). Even with an advanced degree, I was unable to find gainful employment. I worked through a temp agency, then in a seasonal position, then in retail, then in another temp position, and finally started a steady, long-term position four weeks ago.

It was a rough two years and, with my new job, I am finally able to fend for myself, pay my bills, and be independent of odd-jobs and “birthday” money, “Christmas” money, “Valentine’s Day” money, and other “holiday” gift money that allowed me to go out for dinner and have a social life.

I am not opposed to people making a livable wage. If anything, the fact that I have lived on an unlivable wage for the last two years influences me into believing that all people should be able to make a living on their wages.

But I am also concerned for two main reasons.

The first is that I am just now able to enjoy some financial freedom. I have a long way to go, but only in the last month have I been able to afford to actually live. I fear that, with such drastic hikes in the minimum wage, the cost of living will soar. I fear that every industry will be forced to raise prices to recuperate the “loss” in profit due to reallocation to wages. I am concerned that the cost of basics will increase across the board: toiletries, clothing, even food. It is quite possible that the cost increases will make my current livable wage (for one person) unlivable again. Is it possible that “middle-class” families will be forced into poverty because the cost of living increases substantially?

Secondly, most of my jobs have been at non-profit organizations where the success of the organization is dependent on donations (mainly) and sometimes grants. Were non-profits to be required to pay every worker $15 per hour, they may be forced to lay-off employees or limit the services they provide to others in need. Even government organizations would be forced to reallocate money away from services to wages.

Again, I am not opposed to people making a livable wage. But I fear that the ramifications of simply increasing the minimum wage are not sufficiently being considered. I do not have the answer, but short-sightedness does not benefit anyone in the long-term.

Previous Priest to Lead Retreat on How to Pray
Next Boston Marathon victim’s parents: ‘Drop the death penalty’