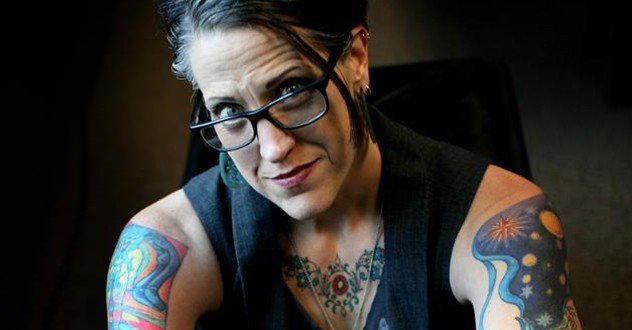 Nadia Bolz-Weber is the kind of pastor who ends up doing funerals for an alcoholic stand-up comic and a transvestite. Photo courtesy of Nadia Bolz-Weber

(RNS) Nadia Bolz-Weber is the kind of pastor who ends up doing funerals for an alcoholic stand-up comic and a transvestite. The founder of Denver’s House for All Sinners and Saints, this tattooed, profanity-loving Lutheran pastor wants nothing more than to tell it like it is.

Her newest book, “Accidental Saints: Finding God in All the Wrong People,” expands on her trademark exploration of finding God in the unexpected.

“When it comes down to it,” said Bolz-Weber, “the church is for losers. We connect to each other and to God through our shared brokenness, not through our personal victories and strengths and accomplishments. This is why it’s hilarious to me when people sort of write me off as hipster Christianity. You have definitely not been to my congregation. It is not hip.”

Bolz-Weber talked recently with Religion News Service about the book. The interview has been edited for length and clarity.

Q: In the book, one of your critiques of social justice goes like this: “Nobody gets to play Jesus.”

If we’re trying to be forgiving people because that’s the way Jesus was, and yet we’re never willing to confess our sins and admit what we need forgiveness for, good luck with being a forgiving person.

Q: Everywhere you see people trying to better themselves, yet you write that, “We always love imperfectly. It is the nature of human love. And it is okay.”

Q: You wrote about a guy named Billy who struggled with heroin and booze, “sometimes played piano in his sister’s dresses” and eventually took his own life. You say he was “pretty much exactly the kind of person Jesus would hang out with.” What do you mean?

Q: Why do you write that we’re punished by our sins and not for our sins?

Hell, yeah, man. Harboring resentment instead of forgiving someone — that’s like drinking poison and hoping the other person dies. That’s its own punishment, just like shopping at Wal-Mart is its own punishment. Being punished for your sins implies that God’s going to wreak havoc on you, God has this score sheet, and if you go over a certain number, then God’s going to make some horrible thing happen to you. God doesn’t have to do that. We do it to ourselves. Good Lord! We create our own hell.

Q: Do you think God punishes?

A: All I can say is, I certainly hope not. Because I’d be screwed. All I can say is, I think if God punishes, then I don’t understand Jesus on the cross saying, “Forgive them, for they know not what they’re doing.” If God was that sort of punishing God, then I can’t think of a better situation than striking down all the people who crucified Jesus. I mean, that’s what I’d do. That’s why I need a God who’s not like me to save me.

Q: What do you mean by God’s saying “yes” to humanity, instead of “maybe”?

A: I’ve been taught that God says, “Well, we’ll see how good you are.” That’s the maybe.

I think there’s a way in which there’s this sort of yes from God that we reject all the time. We’d rather have the ball in our own court. So God says: “The game’s over. You don’t have to compete anymore.” I’m like, “Yeah, but I feel like if I compete, then I’m in control.” Grace actually feels like I’m totally powerless. I have no power. I have no agency. And that feels terrible to us, and we reject it over and over and instead go: “You know, I’m working on my own redemption project over here. I’m going to see how that pans out.”

Q: At the end of “Accidental Saints,” you rewrite Jesus’ Sermon on the Mount with alternate “saints” — for example, “Blessed are the agnostics.” How is doubt saintly?

A: Doubt’s not the opposite of faith to me at all. I think certainty’s the opposite of faith. Doubt means you’re in an active, dynamic relationship to an idea. Certainty means you’re done thinking about it. I think there’s something really sacred about doubt. It’s part and parcel of faith to me. That’s why I go on to say something like, “Blessed are they who aren’t so sure they’ve figured it out that they stop taking in new information.”

Q: Also making the list are hospital orderlies, NFL players and their fundraising trophy-wives. There’s something very physical about all these examples, and you say God is “blessing all human flesh.” What does God care about flesh? Isn’t God concerned with the soul?

Q: You’ve got a whole chapter about King Herod’s slaughtering of the innocents and the Sandy Hook shooting. Why do you think it’s important to remember Herod in the Christmas story?

God chose to enter a world as violent and faithless as our own. I feel like that’s an important thing to know about God.

How do we reflect theologically about what’s going on now? Political tyranny, or in the case of Christmastime 2012, when a bunch of kids are slaughtered in their schoolroom. This is what Christmas is about. I don’t want to put Herod on wrapping paper, necessarily. But Herod has to be part of the Christmas story. He just has to be. I can’t stand that blend of sentimentality and religion that we’re seeing in cultural Christianity. I don’t think it’s in any way helping us make sense of the world as it actually exists.

Previous “White God” is a social-justice fable for our time
Next Limiting Beliefs Leads To Negative Actions, Habits & Choices