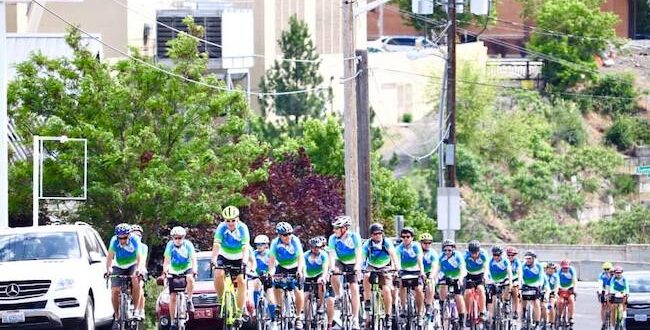 Rev. Scott Starbuck leads a ride with other cyclists/Contributed

Why He Rides: Spokane’s Cycling Pastor

Why He Rides: Spokane’s Cycling Pastor

For a Spokane pastor and professor, cycling more than 400 miles across the state was more than just a test of endurance: it became a ministry endeavor to invite people in a bucket list adventure while raising awareness and money for refugee resettlement.

Starbuck said his ride that summer connected with his personal story of resettlement, which helped him empathize with refugees.

After graduating from Whitworth University in 1985, Starbuck found himself back in Spokane in 2001 after a divorce. He said he didn’t return to Spokane for career opportunities. He even moved without making a resume.

“I made a family commitment in a time of crisis and tragedy, and I had to figure out how to relocate,” Starbuck said. “So my mentality was that I was willing to come here and drive a bus, but I needed to be there with my children.”

Commitment to family is something many refugees focus on when relocating, Starbuck said. When settling to a new place, refugees readjust their lives and take whatever jobs are available.

“The amazing talent pool that you discover with resettled refugees is amazing,” he said. “And yet when they come and resettle in a local position, you know, previous medical doctors cannot just simply become medical doctors.”

Upon relocating to Spokane in 2001, Starbuck managed to secure teaching opportunities at Whitworth University and then Gonzaga University, where he works as a senior lecturer of religious studies. He also started serving as a pastor at Manito Presbyterian Church during that time.

During this difficult transition following his divorce, Starbuck started putting on weight. Starbuck remembers asking a doctor at a wedding what he needed to do before he turned 50 years old. He was 49 at the time. The doctor responded by telling him to lose weight — 100 pounds specifically.

“Whether she put the fear of God in me or something, I just made the decision, ‘OK, I need to do this.’ Literally at the wedding, I changed the way I was eating, and then I started to try to diet,” Starbuck said. “So I lost over 100 pounds from that point until before I turned 50.”

Along with dieting, Starbuck rode his mountain bike often and then transitioned into using a road bike. He also had a bike trainer at home. Starbuck said he “started from ground zero” to lose weight and eventually weaved cycling into his busy schedule and daily routine.

Starbuck ended up participating in a century ride (100 miles) at the Gigantic Bicycle Festival. It was a nerve-racking experience for him, and he trained without knowing what he was actually doing. Yet, he surprised himself by finishing first, and this led him to participate in more competitive cycling events. He has been an avid cycler since then.

Cycling has helped Starbuck find healing in his life. Starbuck said cycling lets him reclaim his junior high years since he grew up in a difficult home.

It even encouraged him to be a better pastor and teacher by becoming more accepting and empathetic toward others. He said the local cycling community is a “wonderful cross section of humanity” where individuals from different backgrounds can come together and accept one another.

Reflecting on his 2018 ride, Starbuck knew that the SEA TRI KAN event could open various opportunities for his congregation and members in the community to come together for a good cause. He said the ride is rigorous enough to allow cyclists to reflect deeply about the pilgrimage and plight refugees undertake when resettling.

“The first time I went on it, I discovered that this had what I thought was great ministry potential for including people in sort of a bucket list-type adventure,” Starbuck said.

In 2019, Starbuck and about 40 other cyclists joined him in his adventure. They stayed at different places during their trip, like a quaint Boy Scout camp and a gym floor at a church. Starbuck said cyclists in his church raised a total of $60,000 for refugee resettlement that year.

When the COVID-19 pandemic emerged in 2020, the SEA TRI KAN event was canceled. Many, however, participated in virtual or local rides to fundraise in 2020 and 2021. Starbuck said his congregation also partnered with World Relief Spokane to distribute food to refugees weekly.

Starbuck said he has seen the ride transform people’s lives, opening their hearts to compassion and empathy.

“You have a helmet on, but you’re vulnerable. For people in the first world, we’re not vulnerable very often. And that in and of itself, right there, is a very important lesson,” he said. “You have to accept hospitality. No one gets to pick what they eat. You have to accept what’s provided for you. Sometimes things go wrong. For people who are used to basically having things in control, it’s a good lesson.”

Spokane resident Martha Chadwick was 73 years old when she joined the 2019 SEA TRI KAN ride. She had just finished surgery, and she said the ride was the perfect opportunity for her to get back in shape. Chadwick also wanted to ride her bike across the state for a long time.

The ride was difficult for Chadwick, but she said Starbuck’s encouragement pushed her to keep pedaling. It was the most supportive ride she had ever participated in.

“Because of his scholastic and academic side, he is able to put Biblical analogies to today’s life so that we as people living now can apply those principles and things that we learn through the Bible to today’s life,” Chadwick said. “And because he’s so smart, he is able to explain things so well, and he’s so patient. He’s able to explain how we really should be living our lives.”

Chadwick also learned perseverance and endurance, and grew deeper in her faith.

“My faith deepened in that I knew that I wasn’t alone, that God was with me, riding every single pedal stroke,” she said.

Liberty Lake resident Zak Cannard also joined the SEA TRI KAN ride in 2019 and did a virtual ride in 2020. Cannard said he and other cyclists heard from different speakers during the 2019 ride.

One speaker was a child soldier from when he was 3 to 6 years old. Cannard said the speaker was kidnapped from his family from a young age. While he was pointing a gun at people, a man shielded him from the bullets. Everyone died except him. He dropped his gun and ended up in a refugee camp where he was miraculously reconnected with his sister.

“You hear stories and it’s almost too terrible to be true, and then you meet someone who was a byproduct of that,” he said.

Cannard said he learned how sheltered he was during the ride and taught him to be more compassionate and understanding toward refugees.

“The ride overall had this kind of joyful somberness,” Cannard said. “You know the cause and how heartbreaking the cause is, but joyful to take up a ride and kind of do a physical, tangible act … to bring awareness and raise support.”

Previous Hijacking for Jesus
Next The Concept of Godly Punishment Never Made Sense to Me, and Now I See Why