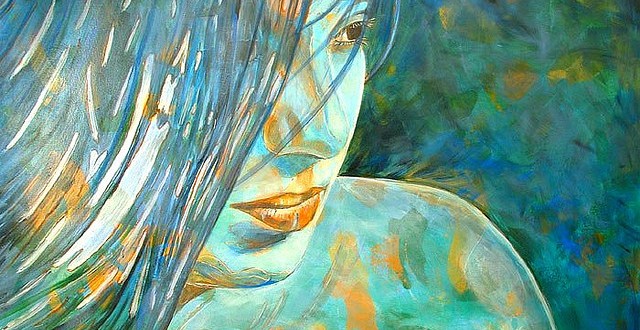 Why God? Why Not Goddess? Part 2

This is the second in a series. Read part one here.

Don’t let me fool you by the confident tenor I espouse when saying, Now is the time for the Goddess. Pursuing Goddess as a young woman began innocently and somewhat accidentally.  Now, as a middle-aged woman I see how She evolved in me, slowly, intentionally and not without some heartache.

I was living in Kansas, going to graduate school, when I wrote my aunt, a Sister of Mercy, a letter telling her the male God I inherited from my Catholic upbringing no longer resonated. Instead, I was in search of something female, and more reflective of me. I remember stumbling into a New Age bookstore that, one day, magically appeared blocks from my house. The coffee pot, of all things, set on an antique oak side table made a lasting impression. The stereotypical witchy white-haired woman, wearing a hand-woven shawl running the shop, wasn’t brewing coffee, though. She steeped herbal tea, using an oversized muslin bag stuffed with an intoxicating floral-scented goodness. I had never seen anyone use a standard coffee maker for tea. Let alone, sniff jars of home grown loose-leaf herbal teas she carefully displayed.

The irony was despite my new spiritual direction, I didn’t feel particularly pagan probably because I couldn’t’ relate to the negativity always hinted in that word. These pagan practices seemed like the most natural things in the world. At the time, I was learning to garden and grow my own herbs and vegetables. The seasons and I were blossoming in synchronicity and I had never felt more spiritually grounded. So the contrary reactions I encountered, on occasion, seemed nonsensical and at times purposely hurtful.

There were people with good intentions telling me, Julia. You don’t want to go messing around with any of that pagan stuff. You don’t know what kind of evil can be stirred up there. Pagan pursuits of any kind are ungodly and that’s just the way it is. I’ll pray for you.

Others with more bite offered, Julia, are you trying to be some kind of witch or something? You know you’ll wind up burning in hell for all eternity if you continue to pursue the devil’s work.

Still other good-natured mid-western folk would say, Julia. You’re a good woman. Come back to God and Jesus where you belong. The place for women is to serve the Lord and Savior.

Ahem. No. I can’t tell you how many times I would sit on my porch and roll those sentiments over and over in my mind. The fear, judgment, intolerance and arrogance were staggering. It never occurred to me that people still associated women’s spirituality and earth cycle practices with devilish witchcraft. I couldn’t believe that people remained entrenched and beholden to those words and the images they conjure.

Call it stubbornness, iron will or rebellion. I was undeterred. If anything I became more committed to getting underneath and behind the fear that inhibits one of the most basic and endearing qualities we possess as humans. Curiosity.

The adage curiosity killed the cat is an absurdity. Only carelessness carries that kind of power. So after careful curious study of Earth Magic and Woman’s Magic, I eventually wandered into Eastern perspectives, Mysticism, Mythology, and Psychology, which is where I remain today. In some ways I’m like that new age woman’s bulging tea bag. I’m filled with a delicious mixture of religion and spirituality, steeping in a culture groping to find resonance with inherited belief systems. What sweetens my particular brew is witnessing growing curiosity and tolerance.

Traditional women’s practices are gaining traction. Midwifery and Doula professions are on the rise after spending decades hidden from view. Herbal, alternative medicine, and Eastern healing practices are increasingly popular, earning recognition and validation from traditional western medicine. The Goddess and all her symbols are being resurrected in ways that promotes women’s health, spirituality, and empowerment.

Women are beginning to hear the divine call deep within. They are listening intently and slowly believing the value of their unique feminine presence in this world. Women are seeking sisterhood communities where they can practice being vulnerable as they shed patriarchal beliefs that serve to undermine or suppress their innate gifts. Women are stepping into the power of the Matriarch that vibrates with every step she makes upon this earth. Women are speaking the voice of Goddess and discovering that Goddess and She are, indeed, One in the same.