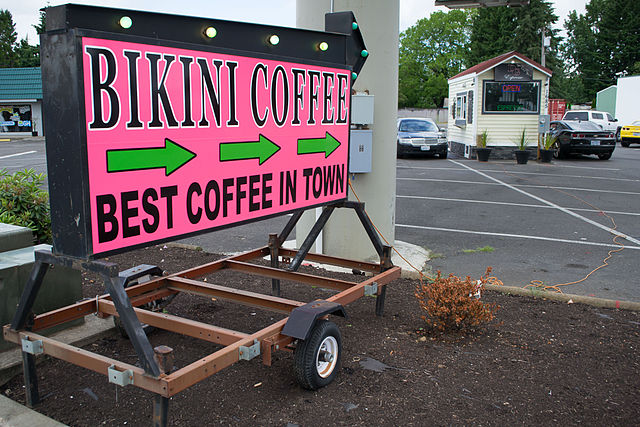 Why Fagan cares about bikini baristas

City Councilman Mike Fagan is up in arms over bikini baristas. Bikini baristas are up in arms over Fagan’s newest proposal. The Councilman representing the 1st City Council District (U-District all the way up to Hillyard) wants to require a minimum clothing regulation or move to zoned “adult business” areas. There’s really no right way to feel about this. So many things about lingerie and bikini espresso stands repulse me — they defame the good name of espresso everywhere, objectify and over sexualize often very young women.

Most people understand that the word “Objectification” is a bad thing, but it’s deeper than that, it’s more than just a word. Our culture has made the female form a source of fascination, a white whale of sexual desire, which creates businesses like strip clubs, bikini barista stands and a whole lot of trouble. “Objectification”, is true to the definition of the word, it takes human beings and reframes worth from intellectual contributions, kindness, humor, love and transforms it in to sexual worth. Objects can’t be hurt, because they are inanimate, but when you turn women into objects, it makes things like cat calls, sexual harassment and even sexual violence more justified in the mind of aggressors and general d-bags.

Bikini barista stands may seem fun or even funny, but are fundamentally damaging to our community. Places like bikini barista stands are not really to blame; they’re merely capitalizing on the built culture surrounding women and women’s bodies. Read: it’s all our fault.

First, allowing middle-aged white dudes to tell women what is acceptable and unacceptable behavior, is exactly what we talk about when we talk about gender inequality. Mike Fagan is, perhaps unwittingly, attempting to institute policies that are directly interfering with the independence and free will of women. And sir, we have enough of that patriarchal bullshit with out the help of our city government. Even more concerning is that Councilman Fagan is a self-proclaimed libertarian, meaning with every other concern, he is supportive of free market ideals and supports little governmental intervention. Except when it has to do with dictating the values of other people. Unequivocally proving he is attempting to institute a policy that is inherently sexist– on purpose.

Second, it is not the place of city government to decide the value system of it’s constituency. But to support the vital services the city provides. In the Spokesman-Review article on the bikini barista cover-up proposal, City Council President was quoted with the perspective of a strong leader, “Who decides what Spokane values are? I didn’t get elected to legislate values. …We should be talking about economic development, the creation of the budget and police accountability…”

We also have the power to buy good coffee from people that wear clothes.

Previous BRIEF: Hiroshima & Nagasaki Memorial Service to be held tonight
Next POLL: Should Spokane crack down on bikini baristas?

Ok…this ‘white whale’ will bite (not objectification just my self-loathing induced by bikini clad women) just to get this party started! Oh and thanks for the article.

Well…with all the call for -fight the power- and -down with the man-, where’s the personal accountability of the self-objectifying women on this issue? I’ve never bought the “McDoanld’s is guilty for making me fat” defense in this culture.

I get the message that has come out of the personal boundaries/no date-rape movement that says just because it’s there doesn’t mean its an offer kind of reasoning. I agree with that truth, but it starts sounding ridiculous coming from the bikini-clad twerking crew. Isn’t there a point (probably long past in this culture) where the messengers discredit the message?

If an owner of such a xxx-coffee stand gets one of those girls sexually assualted should they be held accountable? Are pimps culpable for crimes perpetrated by hookers? I would say yes.

Its getting dangerous out there with the landslide of immorality, a hyper–over-sexualized culture, the disintegrating famliy and when our leaders and public figures are tweeting their junk, bedding their friends wives, juicing for dollars, picking up buddies in stalls, it’s way past time to think about community values.

Is “economic development” a moral issue…absolutely! It’s connected to the morality of precious stones mining, animal raising, farming practices, labor and wage issues or a host of other critical issues. Our city and ‘OUR’ elected representatives should be thinking about such things. These seedy stands send a pathetic message about the livability factor in the areas they do business. I can guarantee the boobie baristas are going to be moved out of there now that the beautiful new business/housing complex finishing up in the International Discrict on East Sprague.

Redevelopment means money…bigger money than these titillating tiki stands are worth.