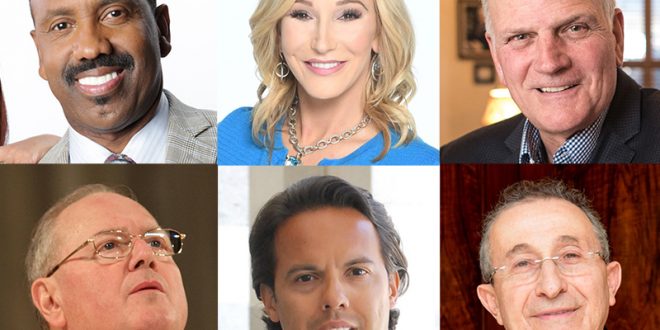 The faith leaders praying at Donald Trump’s inauguration on Jan. 20, 2017.

Who’s praying at Trump’s inauguration? A mix of supporters, critics and firsts

(RNS) They are friends and friendly critics, political outsiders and usual suspects; among them, the first clergywoman, the first Hispanic evangelical Christian, and the first prosperity gospel preachers to speak at a presidential inauguration.

And though Trump himself identifies as a Presbyterian, there’s nary a mainline Protestant Christian in sight.

They are the six clergy members President-elect Donald Trump has invited to offer prayers and Scripture readings at his swearing-in on Friday (Jan. 20) in Washington, D.C.

That’s many more clergy than have participated in past presidential inaugurations, but the numbers allow Trump to cover many bases. Even the critics among them have something in common with the president-elect, be it a theology that supports wealth, shared political views or even just geography.

Here’s a look at the six clergy members who will participate in Trump’s inauguration and what their inclusion says about the incoming president.

Of the clergy picked to participate in the presidential inauguration, the choice of televangelist Paula White has received the most pushback.

And it’s not because of her politics, which sparked the outcry that led Pastor Louie Giglio to withdraw from President Barack Obama’s second inaugural — over a past sermon opposing gay rights.

It’s because of her theology, including an embrace of the so-called prosperity gospel, which is dismissed as heresy by many traditional Christians.

The prosperity gospel teaches God will reward the faithful with wealth, health and happiness, but White has offered an interpretation of it that may sit better with many Christians, in that she has defined prosperity not “in terms of money or material objects.”

“A prosperous life is a life that is fruitful physically, mentally, emotionally and spiritually,” she wrote in her 2007 book “You’re All That!: Understand God’s Design for Your Life.”

White is pastor of the New Destiny Christian Center in Apopka, Fla., and chairwoman of Trump’s evangelical advisory board. She also is the president-elect’s longtime spiritual adviser and an early supporter of his bid for the presidency. And she prayed at the Republican National Convention.

She reportedly will give the invocation on Inauguration Day, making her only the second woman to pray at a presidential inauguration and the first clergywoman. She has said she will “ask God to guide our leaders with wisdom and strength and that He would richly bless our extraordinary home, the United States of America.”

Like White, Bishop Wayne T. Jackson preaches the prosperity gospel. That makes the two the first prosperity gospel preachers to take part in a presidential inauguration, according to the Associated Press.

Jackson gave Trump a platform during the presidential campaign. He had invited the then-candidate to speak in September at his church, Great Faith Ministries International in Detroit, Mich.; interviewed him on the TV station he had co-founded, the Impact Network; and wrapped him in a Jewish prayer shawl.

In his comments to Jackson’s largely black congregation, Trump had stressed the idea of prosperity, saying, “I want to make America prosperous for everyone.”

Jackson said at the time he was a registered Democrat and had voted for Democrats all his life. And he described his invitation to Trump: not as “an endorsement, it is an engagement — so let’s talk.”

The archbishop of New York said in a statement that he was honored to be asked to participate and looked forward to asking “Almighty God to inspire and guide our new President and to continue to bless our great Nation.” He reportedly plans to read from Solomon’s prayer upon becoming king of Israel, according to TIME.

During the presidential campaign, Dolan found himself between Trump and Democratic candidate Hillary Clinton — literally. He sat between the two at the Al Smith Dinner, a charity roast hosted by the archdiocese in election years that invites the candidates to lightly poke fun at one another.

Trump’s jokes at the dinner had fallen flat and drawn the first boos in the history of the event, which the cardinal has said put a damper on “the spirit of the evening.” Dolan faced criticism both for inviting Trump and for inviting his opponent, who parts from the Catholic Church in her support for abortion rights.

The archbishop also voiced his own criticisms of Trump’s campaign positions in a 2015 op-ed for the New York Daily News, writing, “Nativism is alive, well — and apparently popular!”

It also will be the first time in a long time – since 1985 — that a rabbi has taken part in a presidential inauguration.

Rabbi Marvin Hier, dean and founder of the Simon Wiesenthal Center in Los Angeles, will offer a prayer at Friday’s swearing-in ceremony. The center is focused on combatting bigotry and teaching about the Holocaust.

Hier reportedly is close to the family of Jared Kushner, the husband of Trump’s daughter Ivanka Trump, according to the Forward. The Kushner family has donated more than $35,000 to the Wiesenthal Center,according to JTA.

He has said he doesn’t agree with everything Trump did during the campaign, including proposing a registry for Muslim Americans, and he previously released a statement through the Wiesenthal Center criticizing Trump for “lumping all Muslims in the crosshairs of the Terrorism.” A change.org petition with more than 2,220 signatures as of Thursday morning has urged the rabbi to withdraw his participation in the inauguration, saying it helps to “‘normalize’ the dangerous and hate-fueled Trump administration.”

But Hier told the Forward that accepting the invitation “was the menschlichkeit (honorable in Yiddish) thing to do, and I am proud to do it.” He noted he’s participated in blessings for a number of presidents and presidential candidates, both Republican and Democrat, over the past three decades, though never at an inauguration.

The Rev. Samuel Rodriguez will be the first Hispanic evangelical leader to participate in a presidential inauguration, according to NPR.

Rodriguez, president of the National Hispanic Christian Leadership Conference and senior pastor at New Season Christian Worship Center in Sacramento, Calif., responded with a statement saying there is “truly no greater honor than to serve one’s country in such a special way on such a momentous occasion.” He reportedly will read from the Beatitudes, according to TIME.

But that doesn’t mean he’s without criticisms or suggestions for the president-elect.

Rodriguez wrote in an op-ed for RNS that the president-elect’s comments during the campaign “were hurtful to many Hispanics, myself included,” though he since has told NPR he’s noted a “change in tone” over the past few weeks.

And days before the inauguration, he signed onto a letter with rabbis Abraham Cooper and Yitzchok Adlerstein that urged Trump to appoint a National Commission for Healing, noting the “bitterly divisive political, racial and religious rhetoric that has torn our national unity to shreds.” Cooper is associate dean at the Wiesenthal Center.

When the Rev. Franklin Graham offers a Scripture reading Friday, it will be the third time he has participated in a presidential inauguration.

This time, he has said, he hopes to offer something “meaningful” both to the president-elect and to the country.

In the run-up to the presidential election, the head of Samaritan’s Purse and the Billy Graham Evangelistic Association visited all 50 state capitals on his Decision America Tour, encouraging Christians to both pray and vote.

While Graham is not registered with any political party and was careful not to endorse either candidate, he made clear the choice really was “about the Supreme Court … and who do you trust to appoint judges that are going to be in favor of Christian liberty?”

And in the end, he has said, “I think maybe God has allowed Donald Trump to win this election to protect this nation for the next few years by giving maybe an opportunity to have some good judges.”

Previous What shaped King’s prophetic vision?
Next The Jesus Prayer in practice