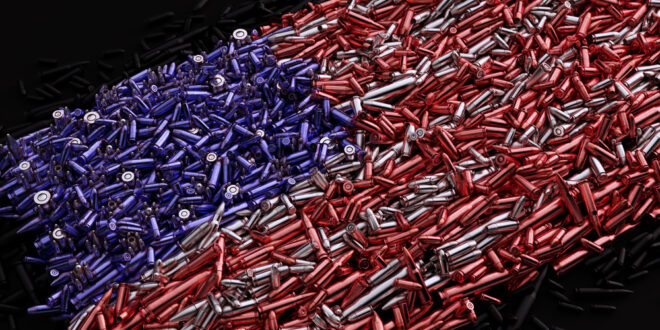 USA Flag formed out of bullets / Photo by 80sChild - Depositphotos

Who Will Light the First Candle?

Who Will Light the First Candle?

Steven Smith’s column, last Tuesday, touches on the common cliché mouthed by officials whenever societal tragedies occur: “Our thoughts and prayers are with victims.” His is one of many angry outcries about the recent toll wreaked by gun toters on innocent victims.

These cries echo decades of conflicting court decisions surrounding the Second Amendment to the U.S. Constitution: “A well regulated Militia, being necessary to the security of a free State, the right of the people to keep and bear Arms, shall not be infringed.”

That sentence has led to hundreds of thousands of unnecessary gun deaths since it was Constitutionally enshrined in 1791. Our legal system is built on precedents, court rulings used as reference points for interpreting the law. A powerful vocal minority, led by the National Rifle Association, holds hostage legislators who could make a difference by a straightforward legal interpretation of that amendment. Apart from thoughts and prayers, that’s not happening.

Cursing the darkness is easy.

Amnesty International’s symbol is a lighted candle encircled by barbed wire. It embodies the saying, “It’s better to light a candle than curse the darkness.” The organization’s U.S. activities cover all forms of human rights, one of which should be the right to not be shot. That’s not included.

Two weeks ago, a Uvalde, Texas, teenager prevented 19 fourth graders from reaching their own teens. He also killed two teachers in their elementary school and injured 11 more children and four adults. That was a week after the Buffalo race massacre and just days past the 101st anniversary of the massacre in Tulsa’s prosperous African American Greenwood District that killed hundreds of Blacks – more than a century of gun violence.

Firearms have figured prominently in American culture even before they were enshrined in the Constitution. A vocal minority of our population wants unrestricted access to firearms whenever and however they wish. Statistics on gun ownership suggest owners are well-heeled, and they have the attention of politicians.

Gun lobby tactics mirror those of tobacco and fossil fuel industries. They spend “just a fraction of their income on lobbying – funding politicians and their parties, buying the services of think tanks and public relations agencies, using advertising to greenwash their credentials – to impede … transition and defend their investments.”

But we’re no longer a frontier culture. Modern militias are not “well regulated.” On the contrary, law enforcement and security analysts speak of the “American militia movement,” private right-wing “paramilitary or similar” organizations that call themselves militias.

While responses from public servants, elected and appointed, have been predictable – restrained and noncommittal – anger rages across our nation.

Courts have consistently decided that the Second Amendment grants citizens the right to own firearms. Inconsistent among those decisions are what restrictions are constitutional, such as the Assault Weapons Ban of 1994, which was challenged in courts unsuccessfully over its decade-long lifespan.

Both New York and Texas restrict gun ownership to those over 18. Buffalo and Uvalde shooters were both 18. They legally bought semiautomatic military style assault rifles three years before they were deemed mature enough to buy cigarettes or a beer.

A frequent gun-lobby recommendation is to station armed police near schools. In Uvalde, that didn’t work. Nineteen armed officers in school corridors refused, for 75 minutes, to engage the gunman while he killed.

A study in the Journal of the American Medical Association examined 133 school shootings from 1980 to 2019, with an armed guard present in about a quarter of the incidents. Death rates at those schools were nearly three times higher than schools without armed guards. Other studies have found similar results.

Lighting the candle is hard.

An equitable legal system must consider changing times and circumstances, then change accordingly to override precedent. It must decide fairly, undeterred by concretions of outmoded decisions. That’s a lot harder, of course, but much more equitable for all concerned.

Higher justice, a system of ethics based on spirituality must be designed “to achieve human happiness through right human action.” Baha’u’llah wrote, “The best beloved of all things in My sight is Justice; turn not away therefrom if thou desirest Me.” Such justice must be “the ruling principle in human society … as a bulwark for the protection of all peoples and nations.”

Lighting that first candle will be hard, but it’s not impossible. Who will strike the match?