Whitworth Theatre to stage “All My Sons” 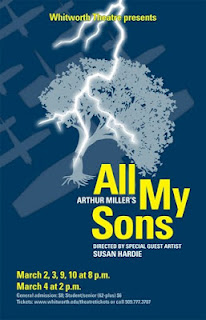 “All My Sons” is a powerful condemnation of greed and its associated lack of moral responsibility. The play takes place in post World War II middle-America and tells the story of Joe Keller, a successful, self-made family man who has done a terrible and tragic thing.

Written by famed playwright Arthur Miller, “All My Sons” debuted in 1947 on Broadway at New York City's Coronet Theatre, where it ran for 328 performances. The same year, the show won Broadway's Tony Award for Best Author (later to be called Best Play). The play has since been adapted into two films, in 1948 and 1987, as well as into adaptations for radio and television.

Broadway revived the show in 2008, and more Broadway performances of the play have been produced nearly every year since.

“'All My Sons' has as much to say now as it did back in 1947, when it first premiered,” said Susan Hardie,the play's guest director. “While America still grapples with issues of war and economic depression, the play's themes of morality and conscience resonate in this age of unchecked greed and lack of accountability. Miller's rich and complex characters are both challenging and rewarding for young actors, and I am thoroughly enjoying my work with this talented cast and crew.”

This is Hardie's directorial debut at Whitworth. The recent retirement of theatre department chair Rick Hornor opened up space to invite occasional guest directors into its directing rotation, said Diana Trotter, professor of theatre and the department's current chair.

“We think it's a great opportunity for students to work with directors outside the department so they are exposed to different styles,” she said.

Performances will be at 8 p.m. Friday and Saturday, and 2 p.m. Sunday, and at 8 p.m. March 9 and 10 in Cowles Memorial Auditorium on Whitworth's campus. General admission is $8; $6 for students, children and senior citizens age 62 and over. Tickets may be purchased at the door, in advance by calling the theatre box office at (509) 777-3707, or online atwww.whitworth.edu/theatretickets.

Previous How should we deal with divorced and remarried people?
Next The threat of ideological purity in politics

Can religious lpeope and atheists work together to end discrimination,sexism, violence, poverty and other social ills? Can liberals and conservatives work together etc. Republicans and Democrats? work together conjure that notion.Your question is POLITICAL conflating religion with social justice. The 2 realms are separateand complementary IF the separation is sustained. If collapsed: then concerns about socialaffairs easily dominate the thinking. The values of individual religious concerns and thevalues of social justice are incommensurate. We collapse & reduce the terms of oneti serve the terms of the other like talking about unconsciousness in conscious terms,or talking abouit the illogical and the irrational in logical and rational terms, or talking about myth scientifically. Etc. May I suggest that RELIGION ( to be bound back ) is primarily an esoteric, salvational,personal (idios) concern & practice. A yoga (yoke) Kierkegaard described it as standingone-to-one in relationship with the absolute, and used Abraham’s culturally insane willingnessto sacrifice is son (so to speak) as metaphor for the relationship. Talking knight of faith here not culture hero (protector of the world. )There’s a difference that makes a difference unless it’s collapsed, conflated, and confused.To scrutinize, assess, evaluate religion in the terms of social issues and concerns is likeusing the terms and values of any finished product as standard to measure the process. To appraise Religion in terms of Science? Like Fred Flatland lecturing on his experiencewith Sphere.. A circle jerk know what I mean? He’ll talk about spheres all his lifein terms of a circle that gets larger and smaller and then disappears. Might as wellask Joe Fish to define WET (let alone dry absolut)Nevermind. Thoreau said he wouldn’t cross the street to save the world.Was he being arrogant, or humble. Or vermin-ous?Walk away, Be. Abandon yr secular humanistic religion: and take atrip on the wild side.