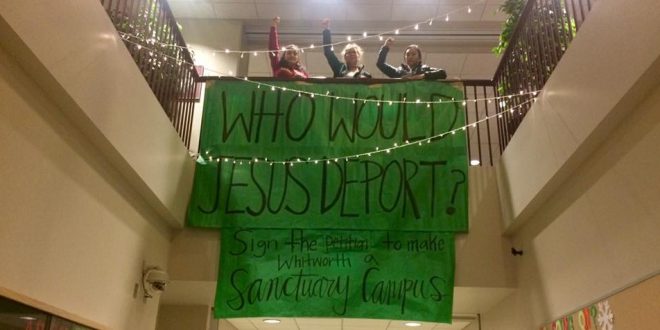 Signs in the Hixson Union Building encouraging students to sign a petition to make Whitworth a sanctuary campus, by Camina Hirota

On Feb. 2 Beck Taylor, president of Whitworth University, released a statement in response to a petition to make Whitworth a “sanctuary campus” for undocumented students, faculty and staff.

The petition was put forward by the Spokane Dream Project, a student club with the mission to “empower undocumented students” in the Spokane School District. It was released on Dec. 1 in response to the then-President-elect’s agenda on immigration, specifically his promise to repeal Deferred Action for Childhood Arrivals (DACA) and to deport 3 million undocumented immigrants as part of his 100-day plan.

The petition challenged president Taylor and Whitworth’s administration to reaffirm their commitment to the safety and well-being of the entire Whitworth community, “regardless of immigration status,” by publicly declaring the school a sanctuary campus and taking a few other specific steps. The letter demanded that the university comply with the Family Educational Rights and Privacy Act (FERPA) by not releasing any student, faculty or staff member’s immigration status, as well as notify members of the Whitworth community not to ask about anyone’s immigration status. It also requested that the school notify local law and immigration enforcement that they would be “barred from executing immigration enforcement operations on campus.”

The petition gathered just over 1,000 signatures from students and alumni, faculty, staff and members of the community. A rally was held Jan. 13 to present the petition to president Taylor, just one week before President Trump’s inauguration. About 50 students met in the Hixson Union Building and carried the lengthy petition to Taylor’s office in McEachran Hall, where they received a warm welcome from Taylor. 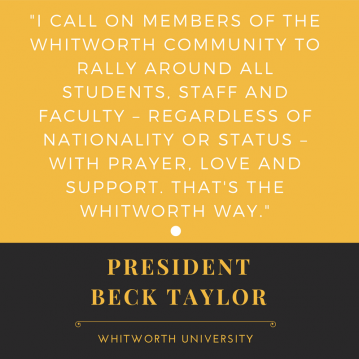 Almost three weeks later, Taylor responded publicly with a detailed statement. “Please forgive this rather lengthy message,” Taylor wrote, “but I want to communicate about the recent events that have an immediate impact for … community members at Whitworth.”

First, he affirmed that “the Whitworth way” is to “rally around all students, staff and faculty – regardless of nationality and status – with prayer, love and support,” regardless of individual political leanings.

The crux of Taylor’s statement is that he will avoid adoptng the term “sanctuary campus” to describe Whitworth, given that the meaning of the term is unclear; in his words it is “vague and highly charged.” Taylor believes that the label has “more utility in making political statements than in ensuring any real and meaningful protection for undocumented persons.”

In his statement Taylor reassures students that he’s on their side, but is required to comply with the law. In response to the petition’s demand that immigration officials be “barred” from campus and sensitive information not be released, Taylor assures that Whitworth will not “voluntarily cooperate,” but adds, “unless compelled by an official court order, warrant or subpoena.”

Rather than taking the symbolic stance of labeling Whitworth a sanctuary campus, Taylor highlights the concrete steps that he personally and the school will take to support undocumented students and staff. First, he announces a forum to take place the next day to provide information on Whitworth’s position and how individuals can support undocumented and international students, faculty and staff. Next, Taylor reveals that he has taken action to encourage President Trump to extend the protections of DACA for undocumented students, and has traveled to Washington D.C. to meet with legislators.

In addition, Taylor includes a list of actions he is asking various school offices to undertake to support undocumented and international students, such as maintaining open communication, making “Know Your Rights” documents and legal assistance available, equipping staff in the student health and counseling center, and waiving study abroad requirements for students who should not travel during this time.

Although in his statement Taylor did not fully agree to any of the three demands made by the petition to make Whitworth University a sanctuary campus, he communicated the practical and legal reasons why the school would not do so. He affirmed that:

My highest and most sacred responsibility… is to ensure the health, welfare and safety of our current students. Whitworth has a number of undocumented students who are important and loved members of our learning community. They contribute greatly to the life and mission of the university. Simply put, they are us, and we are Whitworth.

Previous Ask a Buddhist: What is Nirvana?
Next What can we do to help immigrants? 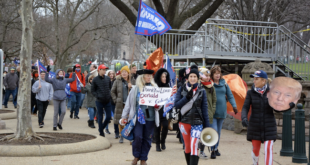 'Jericho Marchers' sang 'How Great Is Our God' as they processed around the U.S. Capitol holding Trump signs and waving Trump flags.