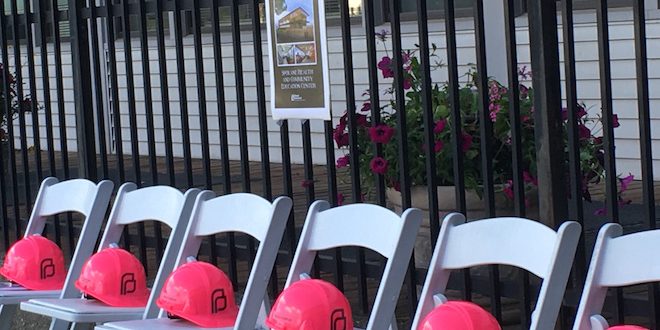 I am a Whitworth alum.  The lessons I learned at Whitworth, in and out of the classroom, have stayed with me and have deeply affected who I am as a Christian in our society. I count alumni and faculty there as everlasting friends and mentors.  While campus culture may ebb and flow anywhere, the people at Whitworth have been steady in my life.

President Taylor released a statement to the campus community that read in part “Being connected to an organization like Planned Parenthood sends the unintended message to many that Whitworth has taken a side in this social and political debate.”  While the confusion that was unintended by Whitworth offering internships with Planned Parenthood was unintentional, by taking this very intentional action of severing ties, Whitworth has made a strong statement about their side in the political debate. Trying to keep feet planted in both sides of the debate has given way to a very clear shift in stance.  Whitworth has, by making this decision at this time, taken sides in the Christian political wars. While putting a non-political face on the announcement, it shows politics is absolutely ingrained in the decision.  Taking a minor campus partnership and making a major decision on it makes it political.

While much of Planned Parenthood’s work is not abortion related, there is no way in our current cultural climate to separate the two.  Abortion overshadows the discussion and debates.   When life begins and whose body is important blocks discussion.   While other Christian universities have maintained strong relationships with Planned Parenthood, Whitworth is not alone in the facing pressures to take a stand on the abortion issue.  Whitworth has always found itself in the position of having to maintain a tenuous balance between left and right.  While being Christian-based, they’ve always promoted thoughtful discourse, and tried to be hold the Calvinist line of being in the culture, not of the culture. They’ve been too liberal for many in the Christian world – and have been far too conservative for others.   This is an incredibly difficult line to try to walk. On issues like abortion, lines are drawn black and white, with no way to walk in the grey areas. No doubt for alums as well as the stakeholders on campus, the debate about abortion will continue to be emotionally charged and will continue to be a challenging discussion.   For an institution dedicated to critical thought and explorations of truth, a black and white culture can become unnavigable. While Whitworth presidents have sought to keep feet in both camps, the current announcement makes a loud statement.

President Taylor was placed in an unwinnable situation when light was shone on Whitworth’s limited partnership with Planned Parenthood by an editorial in the student paper last fall.  Higher Ed is facing many challenges – not the least of which is funding.  Public schools have seen state support dwindle.  Grant funded universities have seen major cuts in grant monies. Private institutions like Whitworth live and die based on tuition and donations.  Increasing tuition costs over the years puts undue pressure on students.  At a school like Whitworth, where students often become “preachers and teachers,” long term student debt to pay high tuition costs can crush the students’ future prior to them even getting their first real job.  In order to try to control tuition costs, the university turns to major donors.  The president of the university is given the duty by the board to be the major face of fundraising.  Students pressure the president from one side, faculty from another, the board from another, and a huge push then comes from the major donors.

In his statement, President Taylor said:

“I have decided that Whitworth’s relationship with the organization, even as limited and tangential as it currently is and has been, sends a confusing signal to many of our constituencies.” When a private university president makes a decision like this, some of the constituencies’ voices end up weighing more than others.  While some alumni have expressed outrage and deep anger at their alma mater for this decision, economic and cultural realities cannot be ignored in the decision-making process.  A budget is a moral statement for any institution. Hard truths can be seen in financial decisions a university makes. Minor donors, like the pockets of alums who have contacted me saying they will no longer give to the university are making hard moral financial decisions, just as the university appears to have done.

The cultural pressures are too large to ignore for our institutions, colleges included. There has been strong pushback against what many in our culture have seen as the attack on conservatism and core evangelical Christian values.  The contentious 2016 election and raise to power of Donald Trump serves as the most glaring example of pushback against the tide of liberal policies in the government as well as cultural shifts in things like acceptance of LGTB rights. Since the election, much has been made about rooms full of white middle-aged men making decisions for women and minorities and their health and place in society.  The push has been summed up by the quote, “when you’re accustomed to privilege, equality feels like oppression.”

The alumni who have reached out to me have had strikingly similar things to say in their statements.  Themes Emerged.  While the abortion topic was a part of their statements, it was a small part.  While each of them have seen the president’s statement about not making a political statement as being a farce, they each have been more concerned with the unintentional messages and unintentional consequences of the decision made.  At a Christian institution that debates free will and predestination, taking decisions away from students on how they gain experiences in internships is seen as short-sighted.  Limiting options, and thus limiting learning opportunities, seems to run counter to their understanding of the educational mission of the institution.  A greater problem in the messages I received from alums were about the tone this sets for the 61 percent of students on campus who are female.  What does this statement say to the majority of students on campus?  While President Taylor’s statement goes to great lengths to say that this decision has nothing to do with gender, the very debate about Planned Parenthood and thus abortion is about gender and so a part of the decision absolutely is gendered. By making a public statement against a partnership with Planned Parenthood, Whitworth has made an assertion – intended or not – about women’s rights and the role they play on campus and in our society.  Friends of mine who graduated from Whitworth and went into the ministry have expressed the difficulties and challenges they’ve faced as being a “woman preacher.”  While the Presbyterian Church USA has ordained women for 61 years, the theology and leadership at institutions that are PCUSA affiliated still place women in a secondary role.

Also at issue is the health and wellness of women on campus. Institutions like Whitworth have always had a tenuous relationship with the topic of sex. Cohabitation and premarital sex are against the university’s honor system, therefore discussions about the sex lives of students are a bit muddied. While I was on campus, I know a person who was raped as a virgin by an acquaintance in the dorms. Since sex was against the rules, her assault was compounded with the added guilt of having not lived up to the campus cultural standards of purity. Sexual assault survivors on private Christian campuses face the pain of having been raped, but often have the additional emotional baggage of not existing in the no-sex world so they’re left feeling there is no support system for them. Making a political statement about where students can complete internships can send a jarring message to those students with the unintended effect of further alienating those victims.

As an underclassman at Whitworth too many years ago to count, the newly appointed president at the time, Bill Robinson, was faced with a similar situation as an LGTB club was seeking formal recognition on campus.  Gay rights were not something discussed openly at the time, and Dr. Robinson was caught between the same sorts of pressures and constituencies that President Taylor finds himself in.   As a snot-nosed 19 year-old, I disagreed with Dr. Robinson’s ultimate decision on the matter, however, I learned a great deal from his teaching and reflection on New Testament lessons.  Romans 2 came alive as Bill discussed his decision, seeking ways to build community and move the college forward.  I learned much in my time at Whitworth.  I learned that Christian leadership is extremely difficult. Having a lived theology on a personal level is completely challenging, so trying to expect an institutional theology to be easy would be akin to madness.  President Taylor, the students, the alumni, the board, and donors all have a piece in this decision that they need to learn from. My deep hope for my alma mater is that they can continue to work together to build that institutional theology, serving their students, challenging them, and working toward a stronger future. I pray they can be in the culture and not of the culture.

Previous Award Winning Educator to keynote YWCA Stand Against Racism Event
Next Ask A Buddhist: What is the Buddhist response to grief?