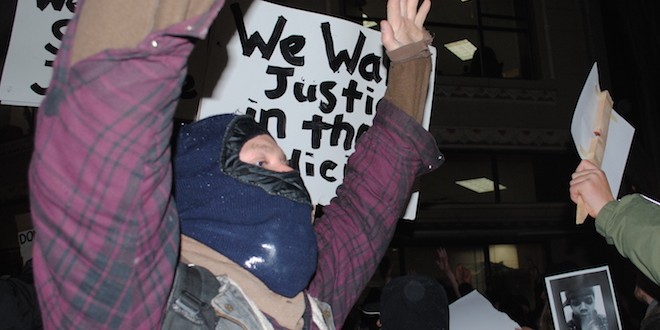 News media today is replete with images of violence in relation to the grand jury’s failure to indict police officer Darren Wilson for the killing of unarmed black teenager Michael Brown. As usual, the news media have easily drawn public attention to the frustration of African American communities in the wake of this verdict. Instead of addressing the crux of the matter — the problem of white privilege that continues to plague the criminal justice system —  the media directs us to one of its effects: expressions of anger and rage. The near-ubiquitous images of rioting and looting work to affirm the myth of violence as one endemic to black communities.  In the process, we ignore other fundamental issues such as increased militarization of the police and the problem of gun violence in the United States. And we also fail to recognize that violence, in the form of state violence, begets other forms of violence.

This is a plea to resist violence — and not only physical harm — but all unjust violence, which is a product of fear.  One way to overcome fear and the related tendency to think and act violently is to become educated about the unjust treatment of African Americans in the criminal justice system.  Attorneys and activists Michelle Alexander and Bryan Stevenson have eloquently demonstrated the preservation of anti-black racism in the criminal justice system over the last half-century.  They remind us that white supremacy undermines a thriving democracy.

Michelle Alexander ends her book on the mass incarceration of African American men with a quotation from James Baldwin’s novel, “The Fire Next Time.” Baldwin, writing in the context of the 1960s Civil Rights movement, explains, “If the word integration means anything, this is what it means: that we, with love, shall force our brothers to see themselves as they are, to cease fleeing from reality and begin to change it.” Alexander, following Baldwin, thinks that it is in our fundamental interest as a nation to resist violence by working together across racial lines. This is not an easy task, and there are plenty of obstacles in the form of ordinary prejudices as well as state policies. These realities can seem overwhelming. But Brown’s death, as well as the deeper social crisis it reflects, can become a basis for truth-seeking and social reform.

Until white America can see the relationship between the assertion of white supremacy in law and the chain reactions of rioting and looting, there will be no change. Until we acknowledge the ugliness of white supremacy as exerting undue influence on our current system of criminal justice, we can only expect that such violence will continue.