Home / Commentary / Blogs / White People, Like Me, Have A Lot of Work To Do 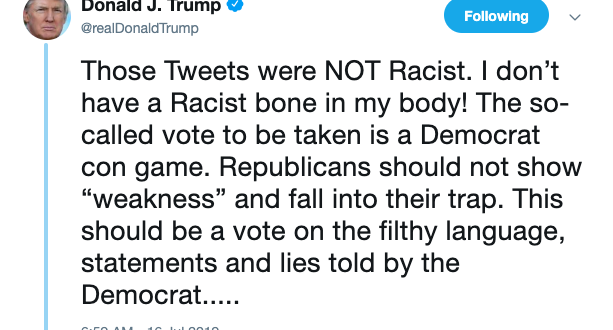 Donald Trump tweets that he is not a racist

On Sunday, President Trump posted a Tweet in which he wrote that “Democrat Congresswomen, who originally came from countries whose governments are a complete and total catastrophe” should “go back and help fix the totally broken and crime infested places from which they came.” These remarks were targeted at four Congresswomen of color, Alexandria Ocasio-Cortez, Ilhan Omar, Ayanna Pressley, and Rashida Tlaib, all of whom are American citizens.

This argument is not new. During his presidency, there has been ongoing criticism of the president’s behavior and speech – such as referring to countries in Africa as “shithole countries” and defending white nationalist protestors as “some very fine people” – as racist. He has consistently responded with resolute denial that any of these behaviors were racist.

Difficult Not To See Trump’s Remarks As Racist

For many, it is difficult to see such comments as anything but racist, yet the president continues to insist that he is “the least racist person.” Is such denial of racist tendencies unusual?

In response to the white nationalist rally that took place in Charlottesville in 2017, activist and author Layla F. Saad published an open letter to spiritual white women in which she wrote, “You did not create white supremacy. But you benefit from it every day because of the white skin you were born in.” She calls out spiritual white women who “claim that their work is all about empowering others, and yet, when the time comes to speak up about white supremacist Nazis and racial injustice, they are silent.” After publishing this post on her website, she found that the women she was addressing largely responded by agreeing with her that those other spiritual white women had a lot of work to do, completely missing that the letter was addressed to them. In response, Saad started an Instagram challenge in which she invited white and white-passing folks to reflect on their own white supremacy. This challenge has been adopted into a book which will be released in February of 2020.

I have been working through this book for a couple of months now, taking time to reflect on my implicit biases and complicity in white supremacy.

I Am A Racist

The truth is, I am racist.

Don’t misunderstand me. I do not consciously think of myself as better than my black and brown siblings, and I certainly do not agree with the many terrible things our president has said about people of color. But, as Saad writes in the Me and White Supremacy Workbook, “White Supremacy is an ideology, a paradigm, and institutional system, and a world view that you have been born into by virtue of your whiteness,” and I benefit from that system whether I’m aware of it or not. That’s why it is important for me to evaluate the ways in which I benefit from and contribute to this system. The first step in being a better ally for my black and brown siblings is to recognize the ways in which I am failing.

Perhaps the most racist thing our president has done, then, is to unwaveringly insist that he lacks any bigotry, that he is “the least racist person.” To ignore the ways in which he benefits from white supremacy, or to consciously deny them, is to promote and strengthen the system further.

My fellow white folks, I highly encourage you to take advantage of this resource that Saad has made available. You can preorder her book here and follow her on Instagram at @laylafsaad.

Previous Ask A Muslim: The Role Of Missions
Next Q&A: Mayoral candidates provide insight to their thoughts on homelessness, religion, climate change and criminal justice

Ask A Buddhist: Why did Buddha Contemplate Instead of Help?

Ask A Jew: Gatherings of 10

Traditionally, Jews pray three times a day which typically includes morning minyan services, however, the vast majority of prayers can be said alone. So during this time, many Jews are davening (praying) at home alone and skipping the prayers that require a minyan.