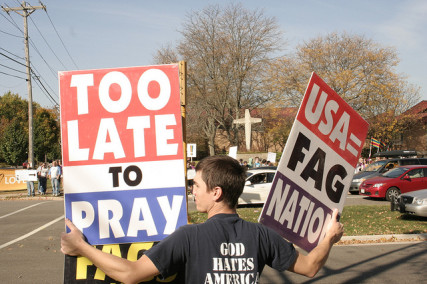 WASHINGTON (RNS) In response to five “We the People” petitions, the White House condemned the actions of the Westboro Baptist Church but said it is powerless to list the Kansas church as a hate group and remove its tax-exempt status.

The White House response on Tuesday (July 1) said the federal government does not maintain a list of hate groups, instead leaving that task to private organizations, such as the Anti-Defamation League and Southern Poverty Law Center. Both have called Westboro a hate group.

Westboro Baptist Church, based in Topeka, Kan., is best known for its graphic “God Hates Fags” signs and its continued picketing of military funerals.

The White House response mentioned that President Obama signed a 2012 law that restricts protesting within 300 feet of military funerals during the two hours before and after a service.

“That all said, we agree that practices such as protesting at the funerals of men and women who died in service to this country and preventing their families from mourning peacefully are reprehensible,” the response stated.

Officials from Westboro, which is led by patriarch Fred Phelps and members of his extended family, could not be reached for comment.

All “We the People” petitions that reach 100,000 signatures within 30 days receive a response from the White House. The White House can also choose to respond to petitions with fewer signatures.

The five petitions received 674,569 signatures; more than 413,000 supported listing Westboro as a hate group, and more than 260,000 asked the White House to revoke or investigate its tax-exempt status.
The petitions, which were all created last December following Westboro’s plans to picket the funerals of shooting victims in Newtown, Conn., question Westboro’s legitimate standing as a church, with one petition saying it “is better-known for homophobic displays, suing people and picketing funerals than for providing Christian care to a community.”

Despite Westboro’s controversial actions, the Supreme Court in 2011 ruled 8-1 in favor of the church’s right to continue protesting, with Chief Justice John Roberts saying the First Amendment protects “even hurtful speech on public issues to ensure that we do not stifle public debate.”

The petition with the most signatures — 367,180 — titled “Legally recognize Westboro Baptist Church as a hate group,” said Westboro poses “a threat to the welfare and treatment of others and will not improve without some form of imposed regulation.”

The White House created a map using zip codes provided by signers of the petition, which shows that support was densely concentrated in Kansas and Newtown, Conn.

“Moreover, one of the remarkable things about this set of petitions is that it shows just how strong the bonds that unite us can be,” the White House response said. “Together, we’re more resilient than those who would try to drive us apart.”

Previous In loving memory of the 19 firefighters, with honor
Next Orthodox Jews to observe July 4th without music