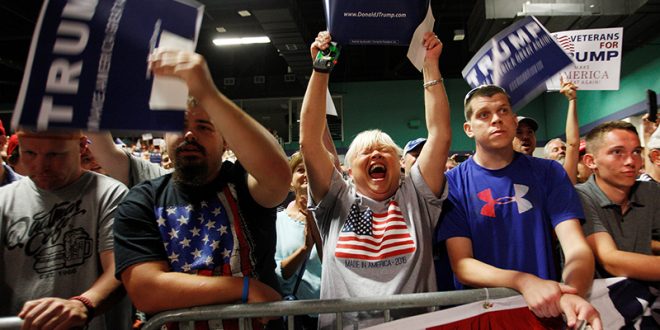 Supporters of Republican presidential candidate Donald Trump react at the start of his campaign rally in Greensboro, North Carolina on June 14, 2016. Photo courtesy of REUTERS/Jonathan Drake

(RNS) White evangelical Christians, a crucial bloc of Republican voters, are backing likely GOP presidential nominee Donald Trump by a wide margin over Hillary Clinton, but their support is significantly lower than for previous Republican candidates.

That relatively tepid faith-based endorsement could wind up undermining  Trump’s chances for victory in November.

A new poll from CBS News showed Clinton, the presumptive Democratic nominee, with a 6-point lead over Trump, 43 percent to 37 percent, basically unchanged from a month earlier.

That sounds like an impressive lead until you consider that recent GOP presidential candidates have won close to 8 in 10 white evangelical voters, and that Trump’s sky-high negative ratings and vulnerabilities as a volatile, first-time candidate mean he will likely need strong turnout from that base to win.

The CBS poll, most of which was conducted before the Orlando nightclub massacre by a professed Muslim extremist, has a margin of error of 3 percentage points. But even shading on the up side, the numbers are not encouraging for Trump.

It’s not clear whether vocal opposition to Trump’s campaign by many prominent Christian conservatives has hurt the candidate, or whether repeated statements by the brash New York real estate magnate, and his personal history and current struggles to speak articulately about his faith, have raised suspicions among evangelicals.

But Trump is continuing to try to woo conservative Christians.

He spoke at a major conference of social conservatives Friday in Washington and next week is to meet with some 900 conservative Christians, mostly evangelicals, who have been invited to attend “a conversation” with him to try to gain their trust.