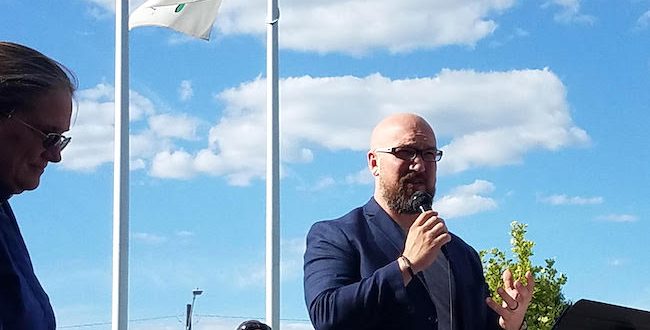 Pounder started his speech with an apology for helping and being part of an organization that supported a theology that was dangerous and damaging to the Spokane area and for those affected by it.

Thinking back to when he was working with his friend, Tanner Rowe, on discussing releasing the “Biblical Basis for War” document, Pounder said he was torn by it.

“As a Christ follower, I was at a dramatic crossroads. I knew this theology existed, we knew it was bad and damaging and it misrepresented Christianity,” Pounder said. “But I didn’t want to hurt anybody anymore, I didn’t want to be part of an organization that thought it was going to take over the government.”

Rowe then encouraged him to tell the truth and had to bring it forward to talk about what it is and the damage that dominionism and Christian Identity brings to the area.  Pounder said he went forward with revealing everything knowing he would lose friends, be hated and a pariah, but knew that he had to tell the truth and do the right thing.

He explained that he does not hate anyone who believes in the ideologies of Christian Identity or dominionism but loves them because Christ calls us to love them.  Using John 13:34, he said how Christ instructed clearly to love one another as He has loved them.

Later in his speech, Pounder said that there were three simple truths he wanted to tell attendees;

“Whether you believe like me or not it doesn’t matter, I love you, the community loves you, we need to learn to respect each other, we need to learn to be more respectful, we can relearn love, we can relearn to be civil,” Pounder said. “We can stop being keyboard warriors and we can actually walk into a place that maybe they’re discussing something that’s completely adverse and not good for the area and show up and say, ‘We’re here, we’re here to listen and we want to be heard and we know it’s not good.’ That’s the opportunity we have.”

Pounder dedicated his medal to the people operating behind the scenes to the keep people informed about the theology and how to combat it.

After Pounder’s speech, a moment of silence was held for the ringing of the bell, A Call to Courage. Afterwards, two presenters read quotes about standing for justice and doing what is right from historical figures including Dr. Martin Luther King Jr., John F. Kennedy, Mark Twain, J.K. Rowling, Theodore Roosevelt, Elie Wiesel, Margaret Mead, Gloria Steinem and others, as well as a verse from Proverbs.

Along with a certificate and medal, Pounder received a card that contained personal messages along with quotes from historical figures.

Close to the end of the ceremony, four presenters from diverse backgrounds spoke about what it means, from their traditions, to live truthfully.  These speakers included NAACP Spokane chapter president Kurtis Robinson, retired obstetrics and gynecology specialist Pam Silverstein and small business owner Joan Berkowitz, who spoke as members of the Jewish community, and former Washington State Senate candidate Jessa Lewis, who spoke as a Christian needing to stand against Christian extremism.

After the ceremony, attendees were given the opportunity to nominate the next recipient of the award on ballots, which is currently expected to be presented on July 2 at the same time and place.

Previous Ride for Refugees: Suspense
Next If no news is good news … pray