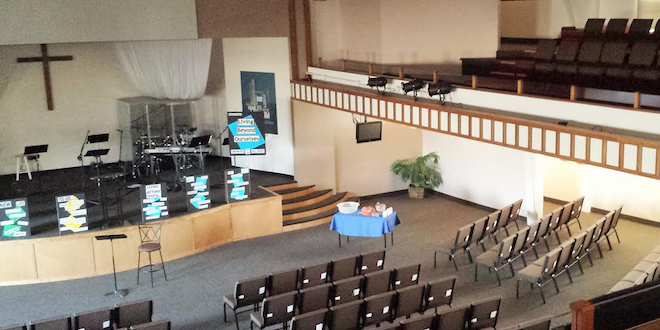 In 1948 Spokane First Assembly of God moved to its current location on the corner of Indiana and Lincoln. Spokane First holds two services on Sundays and runs youth and adult ministry and classes on Wednesday nights.

Pastor Randall Beal, the current lead pastor of the church and a pastor there for the past 15 years, says, “We do a lot of ministry to kids in the neighborhood. I wouldn’t be surprised if we have 80 students that come on a typical Wednesday night and half of them are not connected to our church, they are neighborhood kids…so for some of them they’re hearing about the gospel, about Jesus Christ, for the first time in their life.”

One of Spokane Firsts’ core values is to bring the good news of Jesus Christ to the world through mission. The church participates locally, such as with the Union Gospel Mission or with a chaplain at crisis pregnancy and the county jail, and internationally, with about 55 mission couples and organizations that it supports.

The Assembly of God tradition was born in the United States just over 100 years ago.

“The tradition we come out of is called Pentecostalism. So, Pentecostals believe at the turn of the 20th century there was a, what we say was a, a move of God’s spirit amongst people. They were hungering for more than just intellectual connection with God. They wanted to experience this God. This God you read about in the Bible does things, this Jesus is incredible, why don’t we see those things today?,” Beal says.

Beal made it clear that although the hunger was for a real experience of God on earth, the early Pentecostal faith was also very deeply rooted in Scripture.

He mentioned Mathew 5:6: “Blessed are those who hunger and thirst after righteousness, for they shall be filled.”

Beal also mentioned the book of Acts and how it discusses the gifts of the spirit which include tongues and interpretation, prophecy, and casting out of demons. Early Pentecostals believed there was nothing in the Bible that said God would not do the same thing in humans today as God did in the New Testament.

Other Christian denominations rejected this movement, declaring that although the gifts of the Holy Spirit were important then, they no longer are in modern times. Nevertheless, the movement birthed The General Council of the Assemblies of God.

Spokane First functions autonomously, but voluntarily cooperates with the council, like all churches of the Assembly of God. The church has been fortunate enough to have the funds necessary for upkeep and remodels. Beal says that a couple of years ago they expended some money to remodel the sanctuary, opting for a more “today look,” similar to the restaurants and coffee shops members and newcomers may spend time in, in case the historical building’s exterior feels less familiar.

“We hope that for the person that’s interested in finding a church, or they’re Assembly God background and they’re looking for an Assembly God church, or they’re just a person that goes ‘ya know, I have needs in my life, I don’t know where to meet them, I see that church, I think I’m gonna’ go there Sunday,’ and come in, its comfortable for them to come in,” Beal says.

He added that a worship place’s appearance is “small in comparison to the love of a congregation for people, the caring of them for a newcomer that comes in; that’s huge. This is just a part of that puzzle, I think, to help people have a better feeling about it all.”

Today, the congregation is 600 strong with an attendance of about 370 on Sundays. This is a multigenerational church, 5 to 10 percent of which is non-white.

Sarah Taylor studies English and creative writing at Gonzaga University and is on track to graduate in December 2015. She grew up on a small island just outside Seattle, WA, which instilled in her a rather intense love of water. Journalistic writing and SpokaneFAVS' mission inspires her and she is excited to pursue truth and learning with this community.

Previous Leaving Repressive Religion and Toxic Beliefs Behind: Part 3
Next Ask an Atheist: How do you explain the precision of creation?