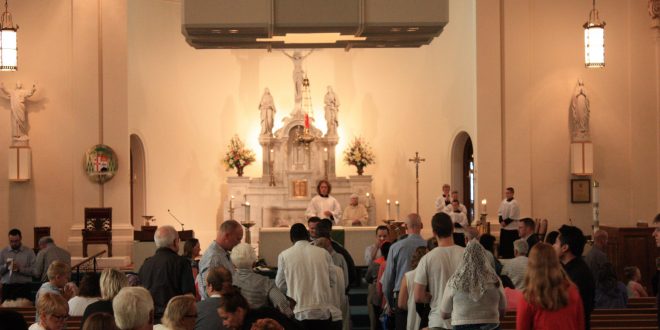 Where We Worship: Our Lady of Lourdes Cathedral is a downtown staple

Located at 1115 W Riverside Ave., The Cathedral of Our Lady of Lourdes had stood in downtown Spokane for 130 years.

Founded in 1886, the cathedral has since been one of Spokane’s oldest catholic church. In 1881, Jesuit Father Joseph Cataldo started the first Catholic church in Spokane named the Church of St. Joseph. However, the towering cathedral soon took its place and had its cornerstone laid in 1903.

The cathedral was named after the Marian Apparitions at Lourdes, when the Virgin Mary appeared to a 14-year-old girl in France. On 18 separate occasions the Lady of Lourdes—or Mary—appeared to Bernadette Soubirous, who would later become a Saint.

“I’ve heard that when it was built, it was the tallest structure between Seattle and Minneapolis at the time,” Rev. Darrin Connall, rector of the cathedral, said.

With tall ceilings and large stained glass windows, the cathedral proves that it has a special eye for dramatic and beautiful art.

“One of the things that we believe is that sometimes you can convey a truth about God easier through symbols, art and architecture than you can through the spoken word,” Connall said.

As one looks around the church, the art tells chronological stories from the Bible. Inside, a window on the left-hand side holds a depiction of the nativity scene and the birth of Christ. Moving to the center of the church, there is a marble altar that holds images of the crucifixion. Finally on the right-hand side, a window presents a scene from Christ’s resurrection.

The church is served by four members of clergy. These members consist of revs. Connall, Jason Hiner, Curtis Seidel and Deacon John Sicilia. The cathedral’s presiding bishop is Thomas Daly.

The church did not receive a bishop until 1913, when the pope formally created the Diocese of Spokane. Our Lady of Lourdes holds Daly’s cathedra; a seat reserved for only the Diocese’s Bishop.

The cathedral has used its geographic positioning to its advantage. Our Lady of Lourdes has attempted to be a “leaven” in their community.

The church has also worked to help its community with some of its issues. The cathedral offers assistance programs for those suffering homelessness and/or substance abuse.

Twice a day, the cathedral hands out sandwiches made by the church’s parishioners. The church manages to hand out an average of 20,000 sandwiches per year.

Support local journalism by donating below

Tags our lady of lourdes cathedral where we worship

Previous Orlando: The Death of Make Believe
Next Ask A Catholic: Can you ‘work’ your way into Heaven?