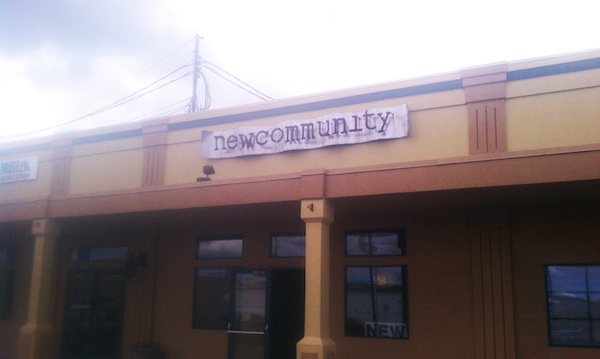 The audience members sat quietly, ignoring the sounds of children playing from the next room, as Russ Davis, wearing his white, blue and gold checkered shirt, and blue denim jeans, preaches from the Book of Acts, 1:8.

“‘You will be my witnesses from the end of the earth to the other,’” Davis said. “All of us have been called to this task.”

Davis is one of the pastors at New Community Church,  1003 E. Trent in Suite 160, located next to No-Li Brewery and Dry Fly Distillery. The church holds services Sunday at 9 a.m. and 11 a.m.

According to its website, the church’s vision is to “cultivate an urban-focused, small group driven community of missionaries who wholeheartedly worships God, unconditionally love all people, and boldly live out and extend the Gospel of the Kingdom of God, through Jesus Christ.”

In addition to reciting from the Book of Acts in his sermon, Davis talked about the expansion of the gospel, where there is division between people with different beliefs and values.

In addition to preaching, Davis also engaged the audience, asking them the things Christ has shown and taught them. At the end of the service, the praise band comes to the stage and plays soothing music as members of the audience take communion.

During service, parents can drop off their children in the “Kid’s Community.” For parents who have smaller children there is also a toddler and a nursery. The church also has small groups for different age groups. It is also involved with youth centers around Spokane, as well as missions around the world.

Where We Worship is a Spokane Faith & Values feature that profiles different houses of worship in the Spokane area. To have your organization featured email tracysimmons@spokanefavs.com.

Al Stover is the Eagle Life editor for the Easterner newspaper and a writer for Rant Sports’ Mixed Martial Arts section.

He is a journalism major at Eastern Washington University and has interviewed characters like cage fighters, drag queens and paranormal investigators.