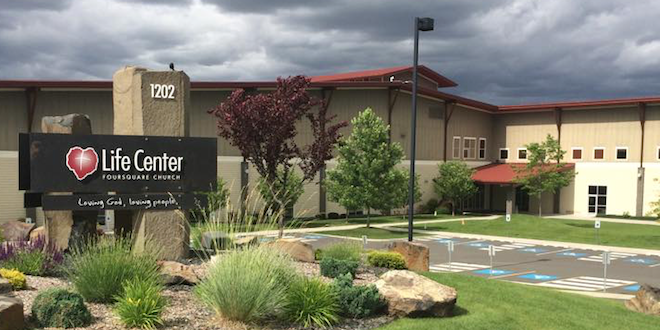 Where We Worship: Life Center Spokane Aims to Help Introduce Others to Jesus

This year marks Life Center Foursquare Chruch‘s 10th year at their current location, 1202 N. Government Way. The church is part of the Foursquare Gospel, which is an evangelical denomination that traces its beginnings back to the early 1930’s.

There are more than 1,600 Foursquare churches across the United States, and tens of thousands across the world.

Current pastor, Joe Wittwer, is credited with founding Spokane’s largest Foursquare branch back in 1978, in a small old building that was across the street from Spokane’s juvenile detention center. In the late 80’s, due to a growing congregation, Life Center moved to Nora street, where it remained until 2005 when construction finished on their current building.

Affiliate church, Life Center North, is located on Division. There is also a Life Center in Couer d’Alene.

Associate Pastor Rick Noll says Life Center is a unique church that wants to help others find, get to know, and emulate Jesus.

“We keep things simple, focus on Jesus, and try to keep him in everything we do,” said Noll.

Previous Surprise! All the stuff I once thought was important isn’t
Next Will Your Religion Be Unrecognizable in 100 Years?

Because there are so many different types of paganism, there is no universal pagan symbol.